Founded in 1773 in South Jutland, the site is an example of a planned settlement of the Moravian Church, a Lutheran free congregation centred in Herrnhut, Saxony. The town was planned to represent the Protestant urban ideal, constructed around a central Church square. The architecture is homogenous and unadorned, with one and two-storey buildings in yellow brick with red tile roofs. The democratic organization of the Moravian Church, with its pioneering egalitarian philosophy, is expressed in its humanistic town planning. The settlement’s plan opens onto agricultural land and includes important buildings for the common welfare such as large communal houses for the congregation’s widows and unmarried men and women. The buildings are still in use and many are still owned by the local Moravian Church community . 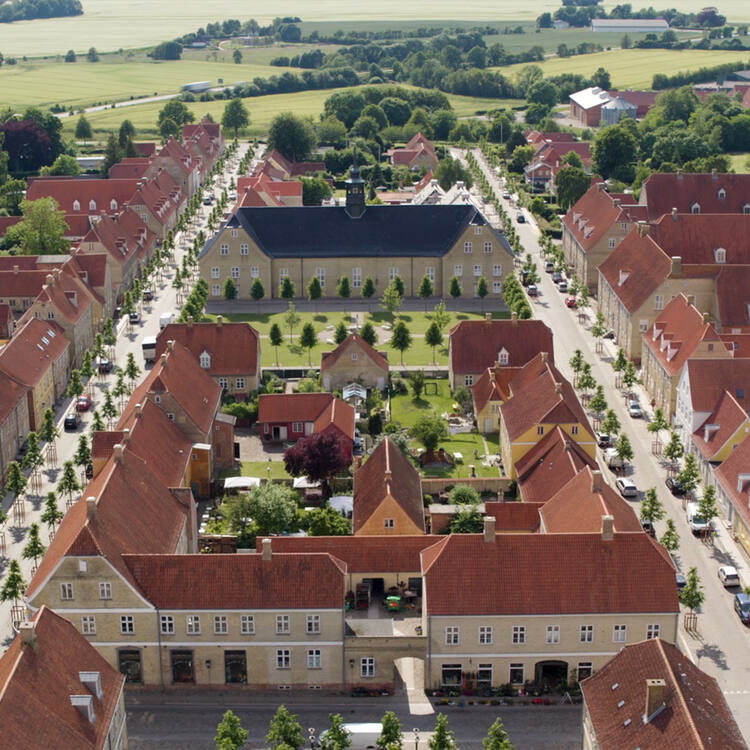 The 18th century settlement of Christiansfeld in South Jutland is an exceptional example of a Moravian Church planned colony settlement, which reflects the Moravian Church’s societal and ethical ideals. Founded in 1773, it was built as a colony of the Moravian Church, a Lutheran free congregation centred in Herrnhut, Saxony. Christiansfeld is one of many exceptional settlements, and it presents the best-preserved example of a northern European colony settlement constructed around a central Church Square. The town presents an intact and well-preserved collection of buildings, oriented along two tangential east-west streets surrounding the Church Square and integrates a cemetery placed outside of the town. The town reflects the Moravian Church’s societal structure, characterised by large communal houses for the congregation’s widows and unmarried men and women. The architecture is homogenous and unornamented, with one- and two-storey buildings in yellow brick and with red tile roofs. The proportions, materials, and craftsmanship contribute to the town’s special atmosphere of peace and harmony.

Criterion (iii): The Moravian Church settlement of Christiansfeld bears an exceptional testimony to the Brethren’s principles, which are expressed in the town’s layout, architecture and craftsmanship as well as the fact that numerous buildings are still used for their original functions and the Moravian Church activities and traditions are continued. Its exceptional state of preservation allows Christiansfeld to be recognized as the best preserved and most complete example of a European Moravian Church colony illustrating urban planning principles aimed at reflecting the social and ethical values of this community.

Criterion (iv): Christiansfeld is an outstanding example of a planned idealized Protestant colony, as is illustrated in its town plan, unity and functional distribution, in which the Moravian Church’s vision of an urban society could be realized. Like other Moravian settlements, it reflects new ideas introduced in the Age of Enlightenment which anticipated ideas of equality and social community that became a reality for many Europeans only much later. The democratic organisation of the Moravian Church is expressed in its humanistic town planning, illustrated by its open plan, established on agricultural land and representing all important buildings for the common welfare. Christiansfeld possesses all necessary town functions and illustrates its unity through homogenous groups of buildings with shared styles, materials, proportions and a high quality of craftsmanship.

The boundaries of the property include the complete original town plan of Christiansfeld and with it all elements that were planned as part of the Moravian Church settlement. A large percentage of the original buildings have been preserved and the town plan remains widely legible. The religious rituals and beliefs of the community, which are the reason for the design of physical spaces, are to a large extent continuously practiced. The visual relations between different parts of the town, including the cemetery and the landscape surrounding it, are still extant. Christiansfeld, due to its excellent state of preservation, illustrates the highest number of characteristic elements found in any European Moravian Church colony settlement and therefore demonstrates integrity. In terms of the overall network of Moravian settlements, further elements could contribute to Christiansfeld’s integrity by means of a future serial transnational nomination of Moravian Church Settlements into which Christiansfeld could be integrated.

The structure and characteristics of the original town plan remain largely unaltered. All buildings, especially those of the early Moravian period of 1820, retain their authenticity in material, design, substance, workmanship, and some of them as well in function and use. The continuity of the Moravian Church community contributes to safeguarding authenticity in spirit and feeling as well as atmosphere of the property. Most of the residential units have been modernized in their interiors to be in line with contemporary living standards whilst aiming to retain their authenticity wherever possible. In some cases architectural renovations could have been implemented with more respect for authenticity. At times architects have aimed for modern interiors of a high aesthetic standard and refinery which have unfortunately reduced traces of historic construction materials and techniques. It is recommended that future modernizations, including of interiors, should pay special attention to the preservation of historic surfaces.

The key historic buildings in Christiansfeld are protected according to the Buildings and Urban Environment Act (Act No. 685 of 9 June 2011). The entire property is protected by Local Planning Act 1311-41 which lays down the rules for the area’s use, land development, roads, trails and parking, wiring systems, the development’s size and location, the development’s outward appearance, etc. World Heritage Sites, according to Danish legislation, are by definition sites of national interest and any approvals granted by the municipality need to be reviewed by the Minister of the Environment. While the protection by planning act seems sufficient and effective at present, planning acts are agreed upon for limited timeframes and may change in the future. Since a national interest has been added with the World Heritage designation, ideally the entire property should be designated as a historic monument at the highest possible level in the national designation system. The Moravian Church has for the past 200 years provided traditional protection to its buildings through their requirements for use.

The management and administration is shared by several partners in a so-called UNESCO Management Group and a Group of Interested Parties. The municipality has allocated funds earmarked for the preservation of Christiansfeld and the Moravian Church has recently established a committee under the Board of Elders for conservation, renovation and maintenance decisions. A senior craftsman employed by the Moravian Church is in charge of the execution of decisions concerned. The State Party has indicated that a risk preparedness and disaster response plan will be developed for the property by 2016.

The management plan predominantly aims at the preservation and protection of Christiansfeld with regards to its town plan, historic architecture and landscape setting. The plan combines a list of specific measures divided into three areas; urban, architectural and cultural, to be undertaken in the forthcoming four years. The current priorities and actions are intended to be implemented up until 2017, when a comprehensive evaluation and revision of the management plan is envisaged. Quality assessment indicators for the evaluation of its implementation are yet to be finalized. The management plan is yet to be officially adopted but the different actions contained in it have been endorsed by either the Kolding Municipality or the Management Group. The Moravian Church community remains very active in upholding its religious and social services. These also form opportunities for involvement in the social and ethical principles that underline the significance of the settlement.