This 16th century aqueduct is located between the states of Mexico and Hidalgo, on the Central Mexican Plateau. This heritage canal system encompasses a water catchment area, springs, canals, distribution tanks and arcaded aqueduct bridges. The site incorporates the highest single-level arcade ever built in an aqueduct. Initiated by the Franciscan friar, Padre Tembleque, and built with support from the local indigenous communities, this hydraulic system is an example of the exchange of influences between the European tradition of Roman hydraulics and traditional Mesoamerican construction techniques, including the use of adobe. 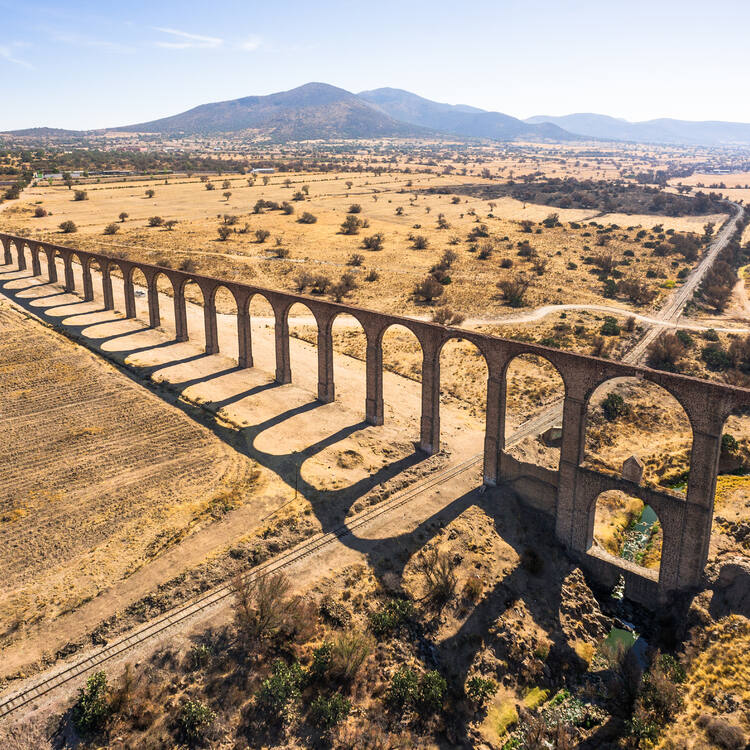 The aqueduct of Padre Tembleque, named after the friar Francisco de Tembleque, was constructed between 1555 and 1572 and constitutes a hydraulic system located between the states of Mexico and Hidalgo in the Mexican Central Plateau. The heritage canal system encompasses its water catchment area, springs, main and secondary canals, distribution tanks, arcaded aqueduct bridges, reservoirs and other auxiliary elements, which extend over a maximum distance of 48.22 kilometres. The aqueduct structures were built with supporting structures of earthen adobes in the Mesoamerican construction tradition, but at the same time referencing European models of water conduction developed during the Roman era.

The hydraulic system is an outstanding example of water conduction in the Americas and integrates along its 48 kilometres’ extent impressive architectural structures, such as the main arcaded aqueduct at Tepeyahualco, which reaches a total height of 39.65m, with its central arch of 33.84m height. The system was built by Franciscan friars with support from the local communities and as a result is a unique representation of the ingenious fusion of Mesoamerican and European construction traditions, combining the mestizo tradition with the tradition of Roman hydraulics. As an ensemble of canals and auxiliary structures, the system is exceptionally well-preserved and one branch remains operational up until today.

Since it is the complexity of the system and the human exchange which created it which contribute to the Outstanding Universal Value, all features of this hydraulic system, including springs, main and secondary canals, distribution tanks, several arcaded aqueduct bridges, reservoirs and other auxiliary elements, are attributes documenting this exceptional construction. The elaborate techniques and cultural exchanges become specifically visible in the mastery of the monumental arcade bridging the Tepeyahualco Ravine and the Papalote River, which is made up of 68 round arches.

Criterion (i): The aqueduct bridge of Tepeyahualco is an architectural masterpiece integrating the highest single-level arcade ever built in aqueducts from Roman times until the middle of the 16th century, achieved as a result of the ingenious use of an adobe formwork as an alternative to scaffolding. Although the use of adobe brick instead of wood was applied elsewhere in Mexico, it was not often and certainly not with the same dramatic effect as in the aqueduct, which bridges the Tepeyahualco Ravine and the Papalote River.

Criterion (ii): The hydraulic system of Padre Tembleque exhibits an important interchange of European tradition in terms of the conjunction of the Roman heritage of masonry aqueducts, hydraulic management techniques inspired by Arab-Andalusian know-how, and pre-Hispanic indigenous tradition as well as Mesoamerican culture, represented by the use of the traditional social organization of collective working, the utilization and adaptation of local methods of adobe construction as well as the presence of glyphs illustrating symbols and cosmology in several arcade structures. It is a monument fusing the humanist ideals of the Franciscan order with the local collective traditions, aimed at promoting common wellbeing through an impressive construction achievement over 17 years.

Criterion (iv): The aqueduct of Padre Tembleque represents an outstanding example of hydraulic water architecture, based on in-depth knowledge of Roman and Renaissance hydraulic engineering which was integrated with local Mesoamerican construction knowledge. The specific techniques and regional materials used in the construction created a unique type of hydraulic system at the time of Mesoamerican-European encounters.

The Aqueduct of Padre Templeque Hydraulic Complex retains the complete hydraulic system over a distance of approximately 48 kilometres. Its landscape setting is predominantly rural characterized by distinctive maguey plantations, with the canal system either historically buried or enclosed in stone, either open or covered. The six impressive aqueduct bridges with 137 visible arches represent less than five percent of the total hydraulic system and hence the presence of all auxiliary elements of the system is a key to its integrity.

At present, few threats of development or land-use seem to affect the Aqueduct of Padre Templeque. The rural landscape setting provides a high level of integrity with only occasional interruption by roads or power lines. It is important that this landscape integrity is retained in the future. The historic urban centres of Zempoala and Otumba have been encroached upon by some unsympathetic new constructions but these have fortunately had little impact on the attributes of the hydraulic system. Any future construction in these historic centres should be reviewed in terms of any potential negative impact which may occur.

The physical manifestations of the hydraulic system are well preserved in its various elements, including ojos de agua (springs), apantles (water canals), aljibes (cisterns), arches, fountains, water tanks, and other water features. These retain authenticity in form and design, material and substance as well as location and setting. The hydraulic system also partially retains authenticity of use and function in the six-kilometre segment of Zempoala, which currently carries water supporting non-potable uses such as washing clothes, irrigation, etc. It is intended to regain completely authenticity of use and function by re-enabling the passage of water through the other branch of the system that connects to the town of Otumba, at a distance of 39 km. However, such reactivation should be carefully supervised by heritage professionals and evaluated in terms of its potential negative impact to the authenticity of the property.

Authenticity in traditions, techniques and management system is illustrated by the continuing maintenance and management by the local communities, during which repairs are undertaken in traditional construction techniques and materials. To a certain extent, the site still evokes feelings which could be related to its original time of construction. This applies in particular where arches of the system exist and where one can see the hundreds of visible glyphs that were incorporated in the aqueduct’s construction by the indigenous populations, underscoring that the spectacular engineering work was a collaborative effort between the indigenous population and the Spanish clergy.

The property is protected under the Federal Law on Archaeological, Artistic and Historic Monuments and Areas promulgated in 1972 as an Historic Monument. This implies that in order to initiate any changes to the current condition of the property and its immediate setting, permission by the National Coordination of Historic Monuments of the INAH and from the Hidalgo and State of Mexico INAH Centres is required. The immediate setting has been defined as the buffer zone, which aims to preserve the integrity of the characteristic maguey landscape.

The property falls into two states and five municipalities which share the administration of the hydraulic system. A Management Unit for inter-institutional coordination and follow-up of the management plan coordinates federal, state and municipal levels as well as agricultural and citizen associations. The management as well as maintenance of the property builds strongly on the cooperation with the local communities and citizen organizations. Any visitor infrastructure planned to be created for the property needs to be carefully selected, as well as be sensitive to the characteristics of the site and its setting.