The List Great Burkhan Khaldun Mountain and its ...
Print

The site is situated in the north-east of the country in the central part of the Khentii mountain chain where the vast Central Asian steppe meets the coniferous forests of the Siberian taiga. Burkhan Khaldun is associated with the worship of sacred mountains, rivers and ovoo-s (shamanic rock cairns), in which ceremonies have been shaped by a fusion of ancient shamanic and Buddhist practices. The site is also believed to be the place of Genghis Khan’s birth and burial. It testifies to his efforts to establish mountain worship as an important part of the unification of the Mongol people. 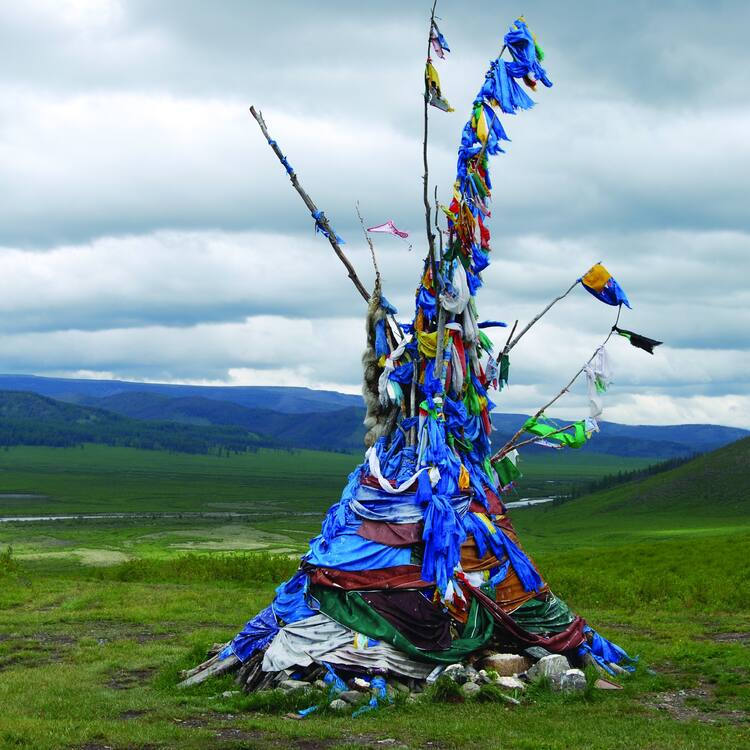 Great Burkhan Khaldun Mountain and its surrounding landscape, lies in the central part of the Khentii mountains chain that forms the watershed between the Arctic and Pacific Oceans, where the vast Central Asian steppe meets the coniferous forests of the Siberian taiga. Water from the permanently snow-capped mountains feed significant rivers flowing both to the north and south. High up the mountains are forests and lower down mountain steppe, while in the valley below are open grasslands dissected by rivers feeding swampy meadows.

Burkhan Khaldun is associated with Chinggis Khan, as his reputed burial site and more widely with his establishment of the Mongol Empire in 1206. It is one of four sacred mountains he designated during his lifetime, as part of the official status he gave to the traditions of mountain worship, based on long standing shamanic traditions associated with nomadic peoples. Traditions of mountain worship declined as Buddhism was adopted in the late 15th century and there appears to have been a lack of continuity of traditions and associations thereafter. Since the 1990s, the revival of mountain worship has been encouraged and old shamanist rituals are being revived and integrated with Buddhist rituals. State sponsored celebrations now take place at the mountain each summer around rivers and three stone ovoo-s (or rock cairns).

The Great Burkhan Khaldun Mountain has few structures other that three major stone ovoo-s alongside paths connected to a pilgrimage route. The cairns were apparently destroyed in the 17th century but have now been re-constructed with timber posts on top. The pilgrimage path starts some 20km from the mountain by a bridge over the Kherlen River at the Threshold Pass where there is also a major ovoo. Pilgrims ride on horseback from there to the large Beliin ovoo made of tree trunks and adorned with blue silk prayer scarves and thence to the main ovoo of heaven at the summit of the mountain. The sacredness of the mountain is strongly associated with its sense of isolation, and its perceived ‘pristine’ nature.

The Great Burkhan Khaldun Mountain and its surrounding sacred landscape, as a sacred mountain, were at the centre of events that profoundly changed Asia and Europe between the 12th and 14th and centuries and have direct links with Chinggis Khan and his formal recognition of mountain worship.

Criterion (iv): Burkhan Khaldun Sacred Mountain reflects the formalisation of mountain worship by Chinggis Khan, a key factor in his success in unifying the Mongol peoples during the creation of the Mongolian Empire, an event of vital historical significance for Asian and world history.

Criterion (vi): The Burkhan Khaldun Sacred Mountain is directly and tangibly associated with The Secret History of the Mongols, an historical and literary epic recognised as of world importance in its entry in the Memory of the World Register. The Secret History records the links between the mountain and Chinggis Khan, his formal recognition of mountain worship, and the formal status of Burkhan Khaldun as one of four sacred mountains designated during his lifetime.

The property has adequate attributes within its boundaries to reflect the scale and scope of the scared mountain, although the boundary needs to be marked in relation to natural features.  An on-going programme of work needs to be undertaken on documenting and mapping archaeological sites that might strengthen associations with Chinggis Khan or traditions of mountain worship, and lead to their protection.

All the natural and cultural attributes of the Burkhan Khaldun Mountain display their value. Various parts of the mountain are vulnerable to an increase in tourism which could profoundly change its sense of isolation if not well managed, and to over-grazing that could impact on its ‘perceived’ pristine nature and on archaeological sites.

Although the majority of the Great Burkhan Khaldun Mountain is situated on the territory of the Khan Kentii Special Protected Area (KK SPA), a small area to the north-west and a much large area to the south lie outside this protected zone. There are plans to include the whole property and its buffer zone in the territory of the KK SPA in 2015. The KK SPA offers legal protection, but this is for natural and environmental protection rather than cultural heritage protection. Further protection needs to be established for cultural heritage and to ensure that no mining or extractive industry will be permitted within the property. The buffer zone is included within the buffer zone of the KK SPA. Currently the property buffer zone has no protection for cultural attributes nor does it have any regulatory procedures related to land-use or new construction and both need to be put in place.

Since 1990 and the renewal of older Mongolian practices related to sacred mountains, national traditions and customs of nature protection in Mongolia and the laws associated with “Khalkh Juram” have been revived and are now incorporated into State policy. On 16 May 1995, the first President of Mongolia issued a new Decree “Supporting initiatives to revive the tradition of worshiping Bogd Khan Khairkhan, Burkhan Khaldun (Khan Khentii), and Otgontenger Mountains”. The Decree pronounced the State’s support for initiatives to revive Mountain worship as described in the original Mongolian Legal Document and as “set out according to the official Decree”. A further Decree of the President on “Regulation of ceremony of worshipping and offering of state sacred mountains and ovoos” provides legal tools for visitor organization during the large state worshipping ceremonies. Any activity on Burkhan Khaldun Mountain itself, other than worshipping rituals, is traditionally forbidden. The KK reserve staff do however undertake fire-fighting, forest protection, forest clearing and renovation, and address illegal hunting and wood cutting.

At the national level, management of the site is under the responsibility of the Ministry of Nature, Environment and Green, and of the Ministry of Culture, Sports and Tourism. At the local level, local authorities at the levels of aimak-s, soum-s and bag-s have responsibility for providing local protection. Although soum administrations have people responsible for environmental protection, there appears not to be any formal arrangement for cultural heritage work. An Administration for the Protection of the World Heritage property responsible for both natural and cultural protection and conservation of the property is to be established, although no timescale has been provided for this, nor a commitment to the provision of adequate resources. Traditional protection is supported through the long standing tradition of worshipping nature and sacred places. For example, it is forbidden to disturb earth, waters, trees and all plants, animals and birds in sacred places, or hunt or cut wood for trading.

A draft Management Plan was submitted as part of the nomination dossier. This will run from 2015-2025 and covers both cultural and natural heritage. It includes both long-term (2015-2025), and medium-term (2015-2020) plans. The draft Management Plan has not yet been approved or implemented. Before completion and adoption, more work is needed to augment the Plan to allow it to provide an appropriate framework for management of the property and necessary funding has still to be put in place from stakeholder organisations together with further support from aid and international donor organizations. Archaeological sites on the mountain that may contribute to a wider understanding of mountain worship and have not been formally identified nor are they actively conserved. Both of these aspects should be addressed in the Plan.

Although a management plan exits for the Khan Khentii protected area and this is implemented by the Administration of Khan Khentii Special Protected Area, this is restricted to conservation of the natural environment and it appears that there is currently no active management for its cultural attributes, nor is work guided by specific cultural strategies and policies. These omissions need to be addressed.
News