From the ancient Neolithic tumulus of Saraikala to the ramparts of Sirkap (2nd century B.C.) and the city of Sirsukh (1st century A.D.), Taxila illustrates the different stages in the development of a city on the Indus that was alternately influenced by Persia, Greece and Central Asia and which, from the 5th century B.C. to the 2nd century A.D., was an important Buddhist centre of learning. 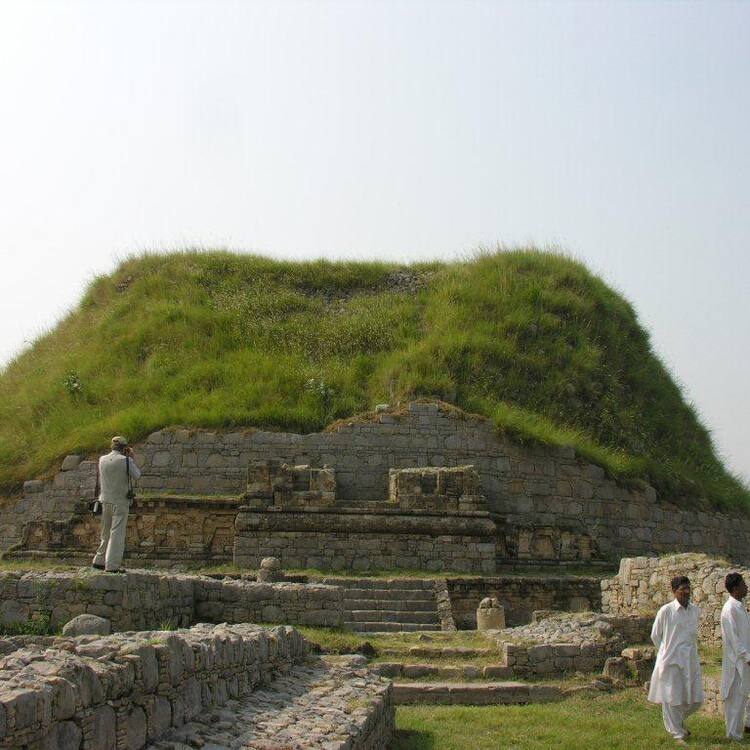 Taxila, located in the Rawalpindi district of Pakistan’s Punjab province, is a vast serial site that includes a Mesolithic cave and the archaeological remains of four early settlement sites, Buddhist monasteries, and a Muslim mosque and madrassa. Situated strategically on a branch of the Silk Road that linked China to the West, Taxila reached its apogee between the 1st and 5th centuries. It is now one of the most important archaeological sites in Asia. The ruins of the four settlement sites at Taxila reveal the pattern of urban evolution on the Indian subcontinent through more than five centuries. One of these sites, the Bihr mound, is associated with the historic event of the triumphant entry of Alexander the Great into Taxila.The archaeological sites of Saraikala, Bhir, Sirkap, and Sirsukh are collectively of unique importance in illustrating the evolution of urban settlement on the Indian subcontinent. The prehistoric mound of Saraikala represents the earliest settlement of Taxila, with evidence of Neolithic, Bronze Age, and Iron Age occupation. The Bhir mound is the earliest historic city of Taxila, and was probably founded in the 6th century BC by the Achaemenians. Its stone walls, house foundations, and winding streets represent the earliest forms of urbanization on the subcontinent. Bihr is also associated with Alexander the Great’s triumphant entry into Taxila in 326 BC. Sirkap was a fortified city founded during the mid-2nd century BC. The many private houses, stupas, and temples were laid out on the Hellenistic grid system and show the strong Western classical influence on local architecture. The city was destroyed in the 1st century by the Kushans, a Central Asian tribe. To the north, excavations of the ruins of the Kushan city of Sirsukh have brought to light an irregular rectangle of walls in ashlar masonry, with rounded bastions. These walls attest to the early influence of Central Asian architectural forms on those of the subcontinent.

The Taxila serial site also includes Khanpur cave, which has produced stratified microlithic tools of the Mesolithic period, and a number of Buddhist monasteries and stupas of various periods. Buddhist monuments erected throughout the Taxila valley transformed it into a religious heartland and a destination for pilgrims from as far afield as Central Asia and China. The Buddhist archaeological sites at Taxila include the Dharmarajika complex and stupa, the Khader Mohra grouping, the Kalawan grouping, the Giri monasteries, the Kunala stupa and monastery, the Jandial complex, the Lalchack and the Badalpur stupa remains and monasteries, the Mohra Moradu monastic remains, the Pipplian and the Jaulian remains, and the Bahalar stupa and remains. The Giri complex also includes the remains of a three-domed Muslim mosque, ziarat (tomb), and madrassa (school) of the medieval period.

Criterion (iii) : The ruins of four universally meaningful settlement sites at Taxila (Saraidala, Bhir, Sirkap, and Sirsukh) reveal the pattern of urban evolution on the Indian subcontinent through more than five centuries. Taxilia is the only site of this unique importance on the subcontinent.

Criterion (vi) : The Bihr mound is associated with the historic event of the triumphant entry of Alexander the Great into Taxila.

Within the boundaries of the property are located all the elements necessary to express the Outstanding Universal Value of Taxila. Exposure of the archaeological remains to the extremes of a tropical climate, uncontrolled growth of vegetation, and earthquakes represents a risk to the overall integrity of the property, as do expansions of the industrial estates located within the Taxila valley (despite their location outside the buffer zone), limestone blasting and quarrying activities in the valley, and illegal excavations by looters in the Buddhist monastery sites.

The archaeological complex of Taxila is authentic in terms of its forms and design, materials and substance, and locations and settings. The property is being maintained to protect and preserve it from any changes to its authenticity. Specific attention to authenticity is being paid in conservation plans in order to maintain original designs, traditions, techniques, locations, and settings, according to international principles.

Sustaining the Outstanding Universal Value of the property over time will require completing, approving, and implementing the Master Plan for the property and strengthening the Comprehensive Management Plan in terms of international standards as well as scientific approaches; carrying out the required scientific studies on vegetation control to minimize the damage to the masonry and structure of the monuments; undertaking an impact assessment of the heavy industries, military compounds, and stone quarrying in the area, and redefining, if necessary, the boundaries of the property in the context of this assessment; managing the existing boundaries and buffer zones to protect the setting; applying to Taxila the national programme to prevent illegal excavation and trafficking in artefacts; and strengthening co-operation between planning, development, and cultural heritage agencies.