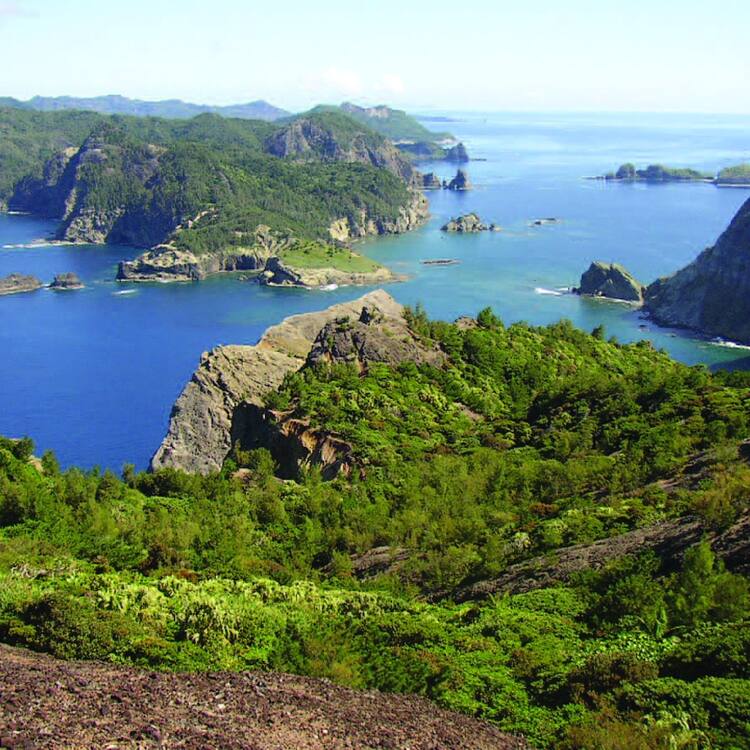 The Ogasawara Islands are located in the North-Western Pacific Ocean roughly 1,000 km south of the main Japanese Archipelago. The serial property is comprised of five components within an extension of about 400 km from north to south and includes more than 30 islands, clustered within three island groups of the Ogasawara Archipelago: Mukojima, Chichijima and Hahajima, plus an additional three individual islands: Kita-iwoto and Minami-iwoto of the Kazan group and the isolated Nishinoshima Island. These islands rest along the Izu-Ogasawara Arc Trench System. The property totals 7,939 ha comprising a terrestrial area of 6,358 ha and a marine area of 1,581 ha. Today only two of the islands within the property are inhabited, Chichijima and Hahajima.

The landscape is dominated by subtropical forest types and sclerophyllous shrublands surrounded by steep cliffs. There are more than 440 species of native vascular plants with exceptionally concentrated rates of endemism as high as 70% in woody plants. The islands are the habitat for more than 100 recorded native land snail species, over 90% of which are endemic to the islands.

The islands serve as an outstanding example of the ongoing evolutionary processes in oceanic island ecosystems, as evidenced by the high levels of endemism; speciation through adaptive radiation; evolution of marine species into terrestrial species; and their importance for the scientific study of such processes.

Criterion (ix): The property's ecosystems reflect a range of evolutionary processes illustrated through its rich assemblage of plant species from both a Southeast Asian and a Northeast Asian origin. There is also a very high percentage of endemic species in selected taxonomic groups, resulting from these evolutionary processes. Within the flora it is an important centre for active, ongoing speciation.

The Ogasawara Islands provide valuable evidence of evolutionary processes through their significant on-going ecological processes of adaptive radiation in the evolution of the land snail fauna as well as in their endemic plant species. The examples of fine-scale adaptive radiation between and sometimes within the different islands of the archipelago are central to the study and understanding of speciation and ecological diversification. This is further enhanced by the relatively low extinction rates in taxa such as the land snails.

The boundaries of the serial property cover the key values of the property and are well designed. The zonation and the legal protection provide an appropriate framework, while the boundaries of Ogasawara National Park serve as a functional overall buffer zone. Marine protected areas are partly included, contributing to more effective management of the terrestrial-marine interface and thus integrity. Integrity issues are mostly related to external threats, most importantly invasive alien species. The effects of invasive alien species and historic logging have already altered many of the archipelago's habitats. Future invasions have the potential to compromise the very values the Ogasawara Islands have been recognized for and therefore need careful and continuous attention. Possible future air access, as well as increased visitation and corresponding development potentially have strong and even irreversible effects in a fragile island environment. Control of access to the islands and of alien invasive species, two in part overlapping issues, is of critical importance for the conservation of the archipelago.

The majority of the property is state-owned and under the authority of various agencies. Some land is owned by Ogasawara Village with some other areas privately owned. The property contains five legally designated categories of protected area managed by three national Government agencies and is surrounded by the much larger Ogasawara National Park serving as a functional buffer zone. The property is protected through seven pieces of national legislation which overlap in jurisdiction and objectives specifying the mandate of the Ministry of the Environment, the Forestry Agency and the Cultural Agency. Any jurisdictional conflicts are resolved through an interagency Regional Liaison Committee structure.

The 2010 multi-agency Ogasawara Islands Management Plan and companion Ogasawara Islands Ecosystem Conservation Action Plan cover a wide area of 129,360 ha and include controls beyond the property such as ship navigation routes. The plans deal with critical issues such as access to the islands and control of alien invasive species. Management activities are detailed for the different island groups within the property with clear coordination mechanisms and monitoring plans prescribed. The plan is based on scientific knowledge and includes timetabled and prioritized actions.

The property benefits from strong links and dialogue between researchers, managers and community. Particularly commendable is the role of the Scientific Council and the approach to research which is adaptive and management-oriented. Local involvement and the maintenance of community benefits are crucial elements in the management of this remote archipelago. 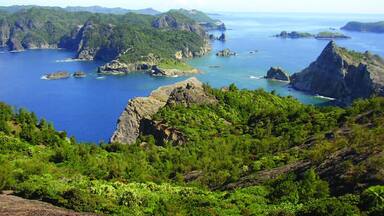