The main objectives of this expert meeting will be to identify issues concerning visual integrity and to review related text in the Operational Guidelines. The meeting will also contribute to a better understanding of the notion of integrity for cultural heritage, which has been previously discussed (Expert Meeting Al Ain, United Arab Emirates, 2012) and will assist the World Heritage Committee in future decision making. The World Heritage Centre, jointly with the State Party of India and the Advisory Bodies, will also prepare background material for this International Expert meeting.

The report of the expert meeting will be presented to the World Heritage Committee at its 37th session in June 2013. 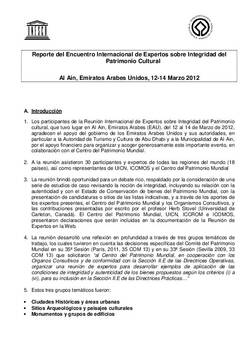 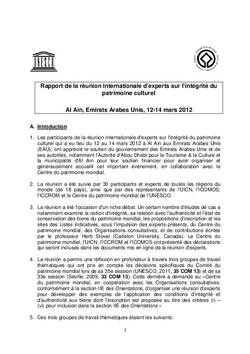 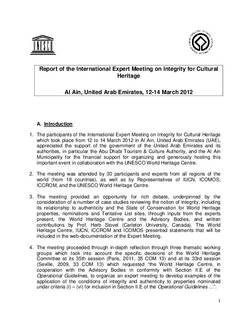 10. Further requests the World Heritage Centre, in collaboration with the Advisory Bodies to:

a)  Propose a revision to paragraph 115 of the Operational Guidelines to confirm the degree to which management systems and legal frameworks need to be in place before inscription,

c)  Elaborate further proposals on options concerning deferral and referral, as well as on the process and timelines for emergency nominations presented under paragraphs 161-162, and to submit the findings and recommendations for examination at the 37th session of the World Heritage Committee,

d)  Make proposals on the methodology for revisions to the Operational Guidelines for the next cycle;

Before States Parties begin to prepare a nomination of a property for inscription on the World Heritage List, they should become familiar with the nomination cycle, described in Paragraph 168. It is desirable to carry out initial preparatory work to establish that a property has the potential to justify Outstanding Universal Value, including integrity or authenticity, before the development of a full nomination dossier which could be expensive and time-consuming.  Such preparatory work might include collection of available information on the property, thematic studies, scoping studies of the potential for demonstrating Outstanding Universal Value, including integrity or authenticity, or an initial comparative study of the property in its wider global or regional context, including an analysis in the context of the Gap Studies produced by the Advisory Bodies.  Such work will help to establish the feasibility of a possible nomination at an early stage and avoid use of resources on nominations that may be unlikely to succeed. States Parties are invited to contact the Advisory Bodies and the World Heritage Centre at the earliest opportunity in considering nominations to seek information and guidance.

The Committee requested the Secretariat with the Advisory Bodies, in consultation with the relevant States Parties, to develop long-term follow-up Regional Programmes structured according to its Strategic Objectives and to submit them for its examination. These Programmes are adopted as follow up to Periodic Reports and regularly reviewed by the Committee based on the needs of States Parties identified in Periodic Reports. These They should accurately reflect the needs of World Heritage in the Region and facilitate the granting of International Assistance. The Committee also expressed its support to ensure direct links between the Strategic Objectives and the International Assistance.

b) Conservation and Management assistance (incorporating assistance for training and research, technical co-operation and promotion and education)

A balance will be maintained in the allocation of resources for between cultural and natural heritage and between Conservation & Management and Preparatory Assistance. This balance is reviewed and decided upon on a regular basis by the Committee and during the last 3 months of each biennium by the Chairperson of the World Heritage Committee.

[Preparatory] assistance may be requested to (in order of priority):

(i) prepare or update national Tentative Lists of properties suitable for inscription on the World Heritage List; a commitment will be required from the State Party to nominate in priority on these lists sites recognized in approved thematic advice, such as the thematic studies prepared by the Advisory Bodies, as corresponding to gaps on the List;

(ii) organize meetings for the harmonization of national Tentative Lists within the same geo-cultural area;

(iii) prepare nominations of properties for inscription on the World Heritage List (this may include, including preparatory work such as collection of basic information, scoping studies of the potential for demonstration of Outstanding Universal Value, including integrity or authenticity, comparative studies of the property in relation to other similar properties (see 3.c2 of Annex 5), including analysis in the context of the Gap Studies produced by the Advisory Bodies. Priority will be given to requests for sites recognized in approved thematic advice as corresponding to gaps on the List and/or for sites where preliminary investigations have shown that further inquiries would be justified, especially in the case of States Parties whose heritage is un-represented or under-represented on the World Heritage List.

(iv)  prepare requests for Conservation & Management assistance for consideration by the World Heritage Committee for training and research assistance and for technical co-operation for World Heritage properties.

All requests for Preparatory Assistance or Conservation and Management Assistance of more than US$ 5,000 for the approval of the Committee should be received by the Secretariat on or before 1 February 31 October. These requests are submitted to the Committee at its next session. Incomplete forms which do not come back duly completed by 30 November will be sent back to the States Parties for submission to a next cycle. Complete requests are examined by a first panel held in January during the meeting between the Secretariat and the Advisory Bodies. Requests for which the panel issues a positive or a negative recommendation will be submitted to the Chairperson/Committee for decision. A second panel may be held at least eight weeks before the Committee session for requests which were revised since the first panel. Requests sent back for a substantial revision will be examined by the panel depending on their date of receipt. Requests requiring only minor revision and no further examination by the panel must come back within the year when they were examined first; otherwise they will be sent again to a next panel. The chart detailing the submission process is attached in Annex 8.

3.   Taking note of the adoption of the Recommendation on the Historic Urban Landscape by the UNESCO General Conference at its 36th session in 2011,

4.   Acknowledging the need to mainstream the methodological approach related to the above-mentioned Recommendation in the Operational Guidelines,

5.   Invites the Director of the World Heritage Centre to convene an expert meeting, in consultation with the Advisory Bodies, to reflect upon and propose appropriate revisions of the Operational Guidelines, in that regard, including its Annex III, for examination by the World Heritage Committee at its 37th session in 2013;

6.   Taking into account the inscription of the propertyRio de Janeiro: Carioca Landscapes between the Mountain and the Sea (Brazil) on the World Heritage List at the present session, welcomes the offer from the State Party of Brazil to host the aforementioned meeting in Rio de Janeiro, with the support of the UNESCO Category 2 Regional Heritage Management Training Centre “Lucio Costa”.