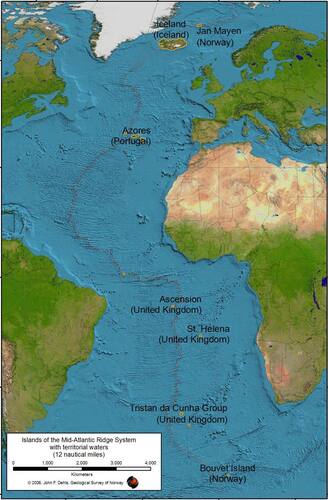 The mid ocean ridge systems are the largest geological features on the planet. The Mid-Atlantic Ridge (MAR) is a mostly underwater mountain range in the Atlantic Ocean that runs from 87°N -about 333km south of the North Pole- to subantarctic Bourvet island at 54°S. The MAR is about 3 km in height above the ocean floor and 1000 to 1500 km wide, has numerous transform faults and an axial rift valley along its length.

The ridge was discovered in the 1950s. Its discovery led to the theory of seafloor spreading and general acceptance of Wegener's theory of continental drift. The MAR separates the North American Plate from the Eurasian Plate in the North Atlantic, and the South American Plate from the African Plate in the South Atlantic. These plates are still moving apart, so the Atlantic is growing at the ridge, at a rate of about 2.5 cm per year in an east-west direction.

Most of the ridge system is under water but forms land as a set of volcanic islands of varying size that run the length of the Atlantic Ocean. These islands are:

Outstanding Universal Value was recognized for some of the properties located on islands associated with the MAR. The following properties are inscribed on the World Heritage List, but not for their geological values of the sites; they were inscribed on the basis of cultural and/or natural criteria:

In the context of the “Earth Heritage-World Heritage” conference at the Dorset- and Devon Coast (September 2004, United Kingdom). on geological conservation, representatives from Norway, Iceland, Azores,the United Kingdom, IUCN and UNESCO met to review the geological and biological heritage of the MAR in the North Atlantic. Discussions focused on the areas where the highest peaks of the mountain chain reach sea-level and shape islands. Most of the submarine part hast to be left out of consideration, because almost the totality of the underwater ridge lies outside any national territory and therefore is not covered by provisions of the World Heritage Convention. The meeting identified the need for a more detailed review of the potential heritage values of the MAR through an expert meeting and development of a strategy for international co-operation in respect of a possible serial trans-boundary nomination for the MAR.

The “Mid-Atlantic Ridge Expert Workshop” in Reykjavik (Iceland) on 16 January 2007 gathered specialists from Norway, Iceland and UNESCO’s World Heritage Centre and Nordic World Heritage Foundation to discuss the outlines of this joint nomination. One of the most important questions remains how to define the limits of the phenomenon of the MAR. It could include the whole opening of the Atlantic Ocean with all the volcanic islands (e.g. Canary Islands or Azores) or only the mountainous ridge itself. Moreover, other countries with territory along the ridge (Brazil, Cape Verde, Spain, Portugal, and the United Kingdom) could join the nomination process; or re-nominate for a serial site their properties already inscribed on the World Heritage List. The participants of the workshop agreed on encouraging cooperation with other conventions in order to better protect the biological, cultural and geological heritage of the ridge.

A side meeting took place during the 31st session of the World Heritage Committee in Christchurch (New Zealand, July 2007), where the Portuguese authorities confirmed their intention to organise a 2nd workshop in Azores, Portugal. This workshop will take place from 27 to 28 March 2008.