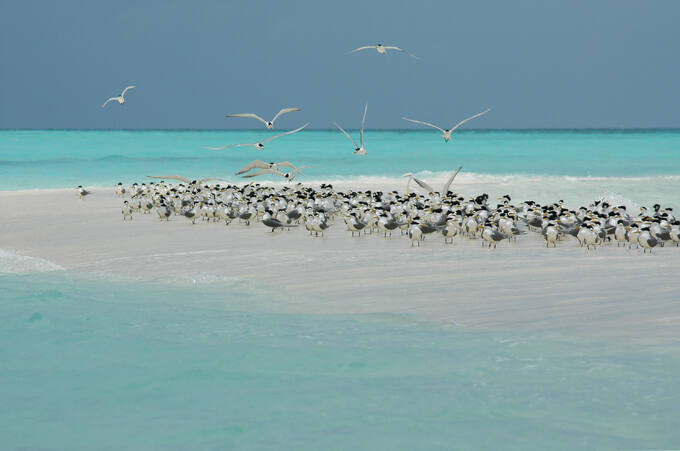 Rationale: Tubbataha is a no-take area and the only activities allowed are tourism, which generates funds for conservation, and research.

Since the late 1970s, when dive tourism "discovered" Tubbataha, boat operators anchored on reefs and caused coral damage. By the mid-1990s, seven boats with gross tonnage between 100-300 operated in the Park during the diving season of March to early June. Coral damage increased in anchor sites with no time for recovery as the new season arrived.

In 1996 the Government of Japan and the Department of Tourism provided funds for the installation of 12 concrete blocks to serve as mooring. Five-ton concrete blocks were installed using a Philippine Coast Guard buoy tender. The concrete blocks proved too light for the vessels during inclement weather so these were augmented with more 5-ton blocks in 2003 through funds from WWF-Phillippines. Ten-ton sinkers were likewise installed in new sites increasing the number of mooring buoys to 15.

Experience during the diving season of this year showed that even the 10-ton sinkers can be likewise be dragged along the coral bottom when the winds are strong and the waves high. In fact, since 1996, 2 sinkers have fallen off the reef crest as a result of dragging during bad weather. Another 2 are too near the reef edge and not allowed for use. To install additional sinkers will further raise the incremental cost of the present mooring system without guarantee of success while diminishing the aesthetic appeal of the sites. The embedment system of mooring is the system of choice in many sites around the world. Initial coral damage is negligible and the system has been proven to work.

Although initial costs are higher than the system now in place in Tubbataha, it is more cost efficient in the long run. Besides, a world class diving destination, Tubbataha Reef National Marine Park and World Heritage Site deserves a world class mooring system.

The Halas mooring system will involve drilling and cementing the moorings underwater through a power unit. Experienced crew are necessary to undertake the activity, hence the need to commission said crew from the United States where the system has been perfected. However, this project will include the training of park staff so that in-house expertise is developed. Equipment and accessories will initially also have to be shipped in from the US. For maintenance purposes, some of the accessories may be fabricated in the Philippines. Further, as the project will include the purchase of the hydraulic installation equipment and the training of the crew, the system may be applied in other sites to protect coral reefs elsewhere and magnify the benefits outside of Tubbataha.

The objective of this mooring buoy project is to prevent further damage on sensitive coral reef areas while allowing the tourism industry and park management to continue to generate revenues without degrading its resource base.

The Tubbataha Reef National Marine Park & World Heritage Site is composed of two uninhabited offshore reefs located 92 nm southeast of the provincial center, Puerto Princesa City. It is the only national marine park in the Philippines and one of only two natural world heritage sites in the country. It lies in the biogeographic center of marine diversity in the world. The Reefs' ecological and economic contribution to the Philippines and to the rest of the world makes its contribution and protection imperative. As of the last surveys of 2004, Tubbataha has been found to harbor at least 441 species of fish, 379 of corals (90% of all coral species in the Philippines), 8 of cetaceans. Seven species of seabirds, some of which are globally threatened, breed in the two islets.