This memorial column, erected in the early years of the 18th century, is the most outstanding example of a type of monument specific to central Europe. In the characteristic regional style known as Olomouc Baroque and rising to a height of 35 m, it is decorated with many fine religious sculptures, the work of the distinguished Moravian artist Ondrej Zahner. 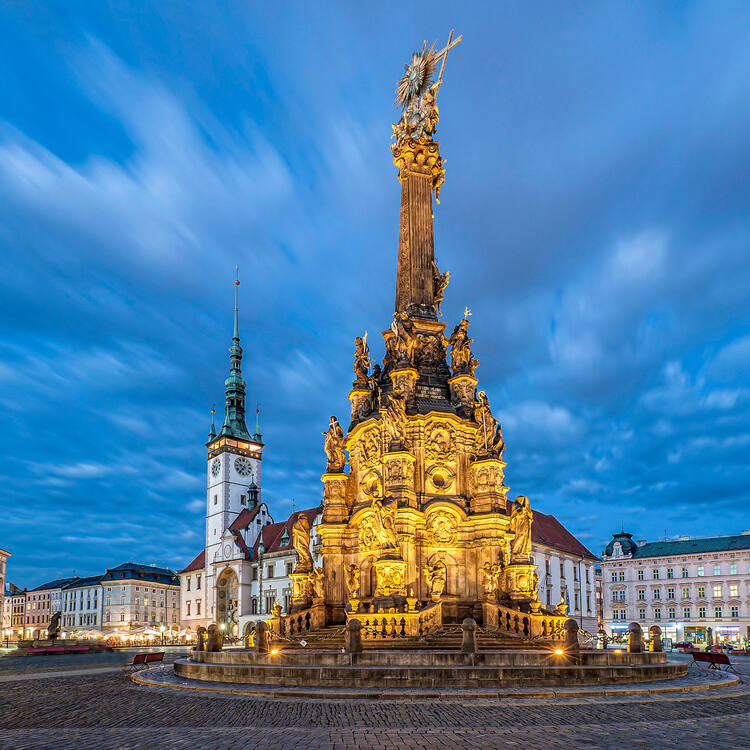 The Holy Trinity Column is at the heart of the historic centre of the town of Olomouc, located in Central Moravia, Czech Republic. This memorial column is the most outstanding example of the Moravian Baroque style that developed in the 18th century in Central Europe. It has a high symbolic value as it represents the religious devotion and the sense of pride of the inhabitants of this city, to which it owes its existence. The Holy Trinity Column is, moreover, an exceptional example of this type of commemorative column, characteristic of Central Europe in the Baroque period. In terms of design, it is, no doubt, the most original work of its creator, Václav Render, whose amazing initiative, accompanied by generous financial support, made the erection of this monument possible.

The main motif of this work consists in the celebration of the church and of the faith that is linked, in quite a unique way, with the reality of a work of monumental art, combining architectural and town-planning solutions with elaborate sculptural decoration. The monument is built in the characteristic regional style known as the Olomouc Baroque, and it rises to a height 32.2 m above a ground plan with a round shape and a diameter of 17 m. The column is decorated with a number of high-quality sculptures representing religious themes, the work of the distinguished Moravian artist Ondřej Zahner (Andreas Zahner) and other Moravian artists (goldsmith Šimon Forstner among others). The Olomouc Holy Trinity Column is without equal in any other town, by virtue of its monumental dimensions, the extraordinary richness of its sculptural decoration, and the overall artistic execution. By the incorporation of a chapel in the body of the column and by the combination of the materials used, the Holy Trinity Column is quite exceptional.

Criterion (i): The Olomouc Holy Trinity Column is one of the most exceptional examples of the apogee of Central European Baroque artistic expression.

Criterion (iv): The Holy Trinity Column constitutes a unique material demonstration of religious faith in Central Europe during the Baroque period, and the Olomouc example represents its most outstanding expression.

All the key elements that convey the Outstanding Universal Value of the property are situated within its boundaries, which correspond with the monument itself. The visual integrity of the property is not threatened since its buffer zone is identical with the urban heritage reservation, which enjoys special protection as a protected conservation area. Its town-planning structure is stable and no change that could threaten the integrity of the World Heritage property is planned.

The Holy Trinity Column in Olomouc is of high authenticity. Its present form and appearance closely reflect the original design and, since then, the column has not undergone any alterations. Since its completion, the awareness of the Column’s uniqueness has traditionally commanded the respect of the city authorities, its inhabitants as well as visitors.

Regular restoration and conservation works of the monument have been carried out for over two centuries, but were mainly limited to minor repairs and gilding. The preservation of authenticity has always been a major criterion for all these interventions. In the past, just one statue has been replaced by its exact replica in stone, that of a torch-bearer situated in the lower part of the column, which was damaged in the fighting at the end of World War II. Between 1999 and 2001, comprehensive restoration works have been carried out under close supervision of authorities responsible of state heritage preservation. To compensate for any loss of authenticity due to natural deterioration of the substrate of the monument, preventive conservation measures are taken.

The Holy Trinity Column in Olomouc is subject to protection under Act No. 20/1987 Coll. on State Heritage Preservation as amended. According to this law, it is designated a national cultural heritage site and therefore it enjoys the highest degree of legal protection that is available under Czech law. The historic centre of the town, designated as an urban heritage reservation itself, is identical with the buffer zone of the property.

The City of Olomouc is the owner and manager of the Holy Trinity Column, and it provides for the maintenance and protection of the property. The property has a management plan which is scheduled for regular updates. There also exists a Land Use Plan of the City of Olomouc and a detailed zoning plan of the urban heritage reservation. These documents include special provisions to preserve and improve the historic townscape, with an emphasis on the importance of preserving open spaces around the monument.