The List Prehistoric Sites and Decorated Caves of the ...
Print

The Vézère valley contains 147 prehistoric sites dating from the Palaeolithic and 25 decorated caves. It is particularly interesting from an ethnological and anthropological, as well as an aesthetic point of view because of its cave paintings, especially those of the Lascaux Cave, whose discovery in 1940 was of great importance for the history of prehistoric art. The hunting scenes show some 100 animal figures, which are remarkable for their detail, rich colours and lifelike quality. 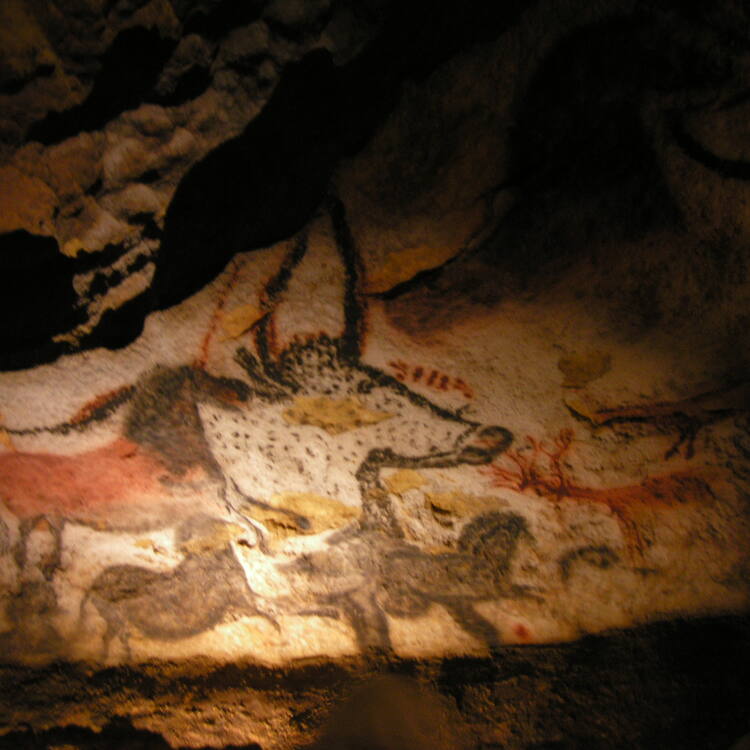 Located in the Nouvelle-Aquitaine region in the Department of the Dordogne, the Vézère Valley is a priviliged prehistoric territory that contains more than 150 deposits dating back to Paleolithic times and about thirty decorated caves. This vast territory of roughly 30km by 40km is of outstanding interest from the ethnological, anthropological and aesthetic point of view with its cave paintings, in particular those of the Lascaux Cave, discovered in 1940. It also enabled the establishment of a chronological cadre for the prehistoric civilizations of the European quaternary period.

This property comprises 15 prehistoric sites that bear witness to a strong Paleolithic occupation: decorated caves, funerary places, workshops, exploitation areas for raw materials, habitats, hunting scenes. Furthermore, its potential as an archaeological reserve is considerable, as demonstrated by the discoveries carried out as preventive excavations since inscription on the World Heritage List.

Criterion (i): Some of the figurative ensembles found in the caves of the Vézère Valley are universally recognized as masterpieces of prehistoric art: The Venus de Laussel (Marquay), the chevaline frieze in high relief of Cap-Blanc, and especially the wall paintings of the Lascaux Cave (Montignac), of which the discovery, in 1940, marks an important date in the history of prehistoric art: hunting scenes  skillfully composed present close to one hundred animal figures, surprising in the precision of their observation, the richness of their colour, and the vivacity of their rendering.

Criterion (iii): The objects and the works of art found in the Vézère Valley are extremely rare witnesses of long extinct civilizations, which are very difficult to understand. This material, invaluable to the knowledge of the most distant periods of the history of humankind, dates back to the Paleolithic period and is of exceptional interest from an historic, ethnological, anthropological and aesthetic point of view.

The association and the density of the Paleolithic sites make the Vézère Valley an ensemble that fully reflects the attributes of Outstanding Universal Value. By their chronology (from 400 000 to 10 000 years), these sites reflect the diversity of human occupations and artistic productions of prehistoric humankind. The essential of the sites is conserved in the state in which they were discovered, ensuring their authenticity. The integrity of their environment is also preserved, mainly in a traditional rural context.

The vestiges are well preserved and documented. The long history of research in this pioneer region of prehistory provides an exceptional level of understanding and documentation of the sites, including a shared outreach tool for the State and territorial collectivities: the Pôle international de la préhistoire.

Despite threats concerning the conservation of the Lascaux paintings that had already led, in 1963, to the closure of the cave to the public, its acquisition by the State and the adoption of strict management measures – threats renewed during a biological proliferation, in 2000 - the authenticity of the paintings and the deposits is ensured. The surface of the Lascaux paintings, modified by “brown marks”, is minimal.

This series of 15 prehistoric sites that comprise the property benefit from high-level legal protection: listed as Historic Monuments, with some sites listed under the Environment Code.

To guarantee their conservation, some caves are closed to the public, due to their vulnerability. Access is always provisional. Monitoring of their state of conservation is ensured by the managers of these areas under the authority of the State and with the participation of the scientific community (The National Centre of Prehistory, Historic Monuments Research Laboratory, the International Scientific Council of the Lascaux Cave).

Protection for the ensemble of the territory of the Valley has now been implemented for several years. It is based on a policy privileging the protection of the immediate environment surrounding the sites and their presentation in the interpretation centres, such as the International Centre for Cave Art in Montignac, comprising a new replica of the Lascaux Cave.

A local Committee, bringing together all the partners and coordinated by the State, has as objective to define the principal issues and actions to be carried out to preserve the Outstanding Universal Value, integrity and authenticity of the property, in particular, based on all the work linked to the “Grand Site de France”, operation conducted in parallel on the territory.