Micro-organisms: outbreaks of mould and bacterial spores on the surface of the cave paintings of Lascaux

On 27 January 2015, the State Party submitted a state of conservation report on the property, available at https://whc.unesco.org/en/list/85/documents, as requested by the World Heritage Committee in its Decision 37 COM 7B.74. This report provides information on the regular and rigorous monitoring carried out regarding the level of contamination on the surface of the cave by the microorganisms.

Very precise observations for each type of alteration (white mould, dark spots, vermiculations) display a slight evolution of the affected area and a slight variation of the contaminated zones; the most isolated zones of the cave remain in a very good state of conservation.

This relative stability of the affected area can be attributed to a very strict control and policy concerning access (344 man/hours in the decorated part in 2014 for 454 man/hours in 2013), the benefit of automated measuring instruments, and very rigorous modelling and intervention planning.

The slight evolution of contamination has enabled the abandon of biocide treatments since 2008.

But this relative stability must not mask the fragility of the property in a context where the understanding of the cause these phenomena still remains to be further studied.

This is the subject of an important applied research programme for conservation that the Scientific Council wished to undertake. As an extension of earlier research work, the programme for the coming years is as follows:

The State Party report also indicates that communication actions were conducted concerning the research work and the new 3-D record of the cave.

Finally, it summarizes the actions and projects aimed at sanctifying the Hill: access forbidden to automobiles, vegetation management plan, construction off site of the future Lascaux IV Centre.

The strong commitment of the State Party in the comprehension and resolution of conservation issues of the cave should be noted. The implementation of recommendations based on early scientific research and the very strict limitation of access have resulted in the relative stability of contamination in an ecosystem that however remains very fragile.

The quality of the very regular and precise monitoring carried out on the conservation of the property should also be noted, each time and when possible preferring the use of automated measuring and recording devices, thus contributing to the limiting of access.

The research programme that continues under the auspices of the Scientific Council has enabled considerable progress in the comprehension of the phenomena of the spreading of the micro-organisms, the hydro-climatic conditions of the cave and the exchanges and interactions between the cave and the overall hill site. The results of this research undertaken for two or three years to come should provide further progress, with as goal the ability to anticipate the imbalances likely to favour an outbreak. The involvement of the Scientific Council in the diffusion of the results of this research, useful to all the parietal art sites, is very satisfactory.

Progress accomplished regarding the sanctifying of the entire Hill includes the construction of a ring road enabling the closure of roads and automobile access and the establishment of a vegetation management plan of the hill, based on research conducted on exchanges between the cave and its environment, are also positive developments.

Finally, note is taken of the commitment to the project for the future International Centre for Parietal Art, Lascaux IV. Its vocation, in addition to the presentation of a facsimile of the integrality of the cave, is to inform and understand the diffusion of Paleolithic parietal art in different sites throughout the world. The establishment of this Centre, the opening of which is foreseen for spring 2016, should also contribute to sanctifying the hill by enabling alternative uses of the Lascaux II facsimile site, located too close to the cave. 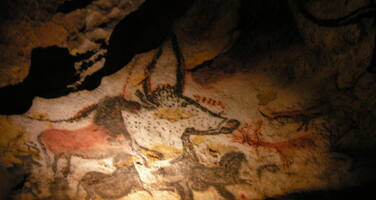