Rising above the modern lower town, the Alhambra and the Albaycín, situated on two adjacent hills, form the medieval part of Granada. To the east of the Alhambra fortress and residence are the magnificent gardens of the Generalife, the former rural residence of the emirs who ruled this part of Spain in the 13th and 14th centuries. The residential district of the Albaycín is a rich repository of Moorish vernacular architecture, into which the traditional Andalusian architecture blends harmoniously. 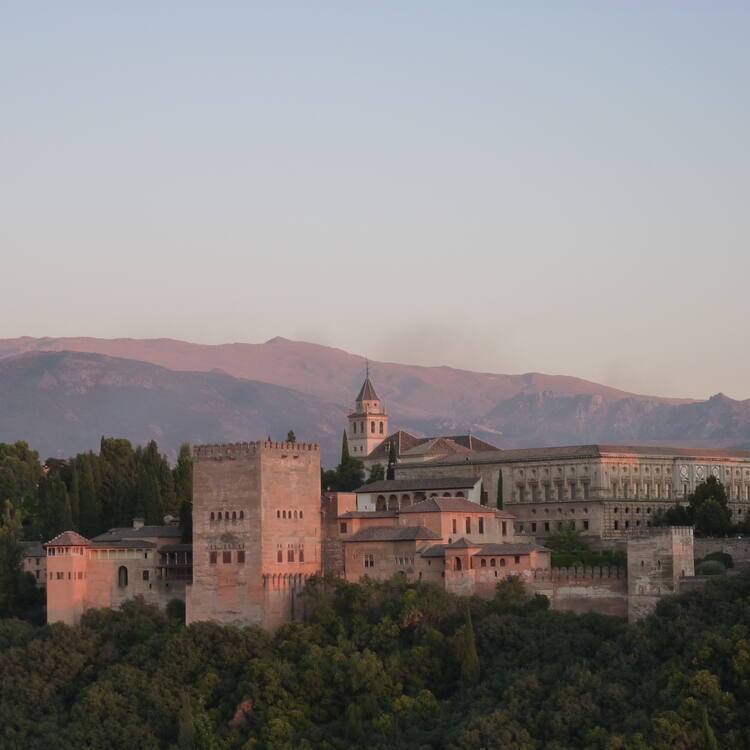 The property of the Alhambra, Generalife and Albayzín, Granada, stands on two adjacent hills, separated by the river Darro. Rising above the modern lower town, the Alhambra and the Albayzín form the medieval part of the City of Granada, which preserves remains of the ancient Arabic quarter. These components represent two complementary realities and examples of medieval urban complexes: the residential district of the Albayzín and the palatine city of the Alhambra. To the east of the Alhambra fortress and residence are the gardens of the Generalife, an example of a rural residence of the emirs, built during the 13th and 14th centuries.

The Alhambra, with its continuous occupation over time, is currently the only preserved palatine city of the Islamic period. It constitutes the best example of Nasrid art in its architecture and decorative aspects. The Generalife Garden and its vegetable farms represent one of the few medieval areas of agricultural productivity. These palaces were made possible by the existing irrigation engineering in Al-Ándalus, well established in the Alhambra and Generalife with technological elements known and studied by archaeologists. This constituted a real urban system integrating architecture and landscape, and extending its influence in the surrounding area with gardens and unique hydraulic infrastructures.

The residential district of the Albayzín, which constitutes the origin of the City of Granada, is a rich legacy of Moorish town planning and architecture in which Nasrid buildings and constructions of Christian tradition coexist harmoniously. Much of its significance lies in the medieval town plan with its narrow streets and small squares and in the relatively modest houses in Moorish and Andalusian style that line them. There are, however, some more imposing reminders of its past prosperity. It is nowadays one of the best illustrations of Moorish town planning, enriched with the Christian contributions of the Spanish Renaissance and Baroque period to the Islamic design of the streets.

Criterion (i): The Alhambra and Generalife contain all the known artistic techniques of the Hispano-Muslim world, on the basis of a proportional system in which all decorative and building developments are based, with particular emphasis on the aesthetic value represented by the intelligent use of water and vegetation. Together with this tradition, since 1492 the Royal House has received the most advanced proposals in terms of palace and poliorcertic architecture, and plastic arts of Western humanism.

The Albayzín district is the best-preserved illustration of a Hispano-Muslim city in the South of Spain, particularly formed during the Nasrid dynasty. The Albayzín, enriched with the contributions of Christian Renaissance and Spanish Baroque culture, is an exceptional and harmonious blend of two traditions, creating a unique and special form and style.

Criterion (iii): The development of the materials used in the Alhambra and Generalife are unique particularly with the use of plaster, wood and ceramics as decorative elements. Together with the use of the Arabic epigraphy, constructions were transformed into an ensemble of “talking architecture”, whose contents are related to the religious, political and poetic world of the Nasrid Dynasty, preserved and enriched by the best examples of the humanistic and innovative art of the Spanish Renaissance. The architectural ensemble is a living example of the mix of Easter and Western artistic traditions.

The Albayzín represents a microcosm of what the Andalusi cultural splendour meant in Granada from its origins in the Zirid Dynasty to the magnificence of the Nasrid Dynasty. The customs passed down through the Andalusí people originated in these kinds of neighbourhoods and have largely influenced all European cultures. Their great scientific knowledge and their social customs - as well as their gastronomy and hygiene – confirm the greatness of this advanced culture that influenced the subsequent cultures of the Albayzín centuries later.

Criterion (iv): The Alhambra and Generalife bear exceptional testimony to Muslim Spain the 13th and 15th centuries. They form a remarkable example of the palatine residences of medieval Islam, neither destroyed nor changed by the vicissitudes of time, as with the examples in Maghreb. The architecture and urban landscape of the Albayzín is the most remarkable cultural example of the survival of Andalusí culture in our days. It bears witness to the medieval Moorish settlement, which was not changed when it was adapted to the Christian way of life after the conquest. Its main characteristics in terms of form, materials and colours, are preserved almost without change and survive as a notable example of a Moorish town of the Nasrid dynasty that merged with the vernacular town planning of the 19th century and the beginning of the 20th century.

The component parts convey an ensemble of values, preserved throughout time and enriched by their symbolic value since the first constructions. Since the 13th century, their different occupants have preserved the areas in an original way, sometimes changing their functions but keeping the unifying nature of each part. The inscribed components are complementary to each other in various respects and form a coherent whole.

The Albayzín is remarkably well preserved and still maintains its original residential character, the result of the rich vernacular of Moorish architecture, harmoniously finished with elements of the traditional and secular Granadian architecture. The town planning of the 19th century and the first half of the 20th century took this rich cultural legacy as a practical basis, combining it with other typical elements of the period. Thus, the ensemble of the secular architecture is perfectly integrated to the rest of the country house and the urban structure of the ancient Nasrid quarter, making the Albayzín of the 21th century a unique cultural phenomenon.

The attributes contained in the inscribed property justify their exceptional position in the Islamic architectural tradition of the Early Middle Ages, and they express the authenticity in a reliable way. Since its conception as a palatine city, its architecture began from a proportional system, following the principles of area compartmentalization, no exteriorization and the typical acclimatized design of the Islamic culture. Together with this, it comes to fruition in a decorative program based upon geometry, epigraphy and vegetable decoration that attain its most characteristic expression in Mocárabe vaults. This repertoire is completed with support elements that constitute an integrating body beyond the stylistic and cultural frontiers. During the 19th century, some restoration practices impacted these attributes, although scientific interventions in the 30s of the 20th century admirably corrected these impacts and the main characteristics in terms of form, materials and colours, are preserved almost without change.

The Alhambra, and particularly Generalife, incorporates the Moorish gardening tradition, the aesthetic use of water and gardens of production and entertainment, having one of the oldest areas of terraced patchwork known in Europe. It also shows the Renaissance and contemporary gardening techniques, a result of the increasing concern over the preservation of botanical design traditions.

The street design and the Hispano-Muslim townscape show the authenticity of the Albayzín district, preserving unique examples of the main architectural milestones. Until 1990, the lack of global policy or strategy provoked the inadequate use of materials and techniques for some restorations. Nowadays these defects are being rectified and reverted. The contemporary works are designed in order to replace, as far as possible, the external manifestations of modern life, which tend to devalue the perfect image of the traditional Moorish settlement that has survived through the centuries but it is continuously exposed to the irreversible changes of modern life.

Its motley urban framework, full of narrow and winding streets, coexists harmoniously with the changes and the opening of new public spaces (squares and small squares) built after the Christian conquest. The emergence of the Moorish style is essential to understand the morphology of the district. In terms of architectural production it means the adaptation from the Nasrid technique to the Christian monastic, ecclesiastical and residential typologies, which coexist with the richness of Muslim buildings (walls, gates, houses and palaces, public baths, water tanks, bridges, hospitals). In Albayzín, the so-called “domestic Moorish architecture” becomes a concrete and identifying manifestation of this cultural union.

The property is protected by an overarching legal framework, which includes Law 16/1985, of July 25, on the Historical Heritage of Spain, Law 14/2007, of November 26, on the Historical Heritage of Andalusia and its development regulations. Decree 186/2003 of June 24 whereby the demarcation of the Historical city of Granada, declared an artistic and historical site by the Royal Order 1929 of December 5, is extended. In addition, the Historical City of Granada is defined as Cultural Interest Property (BIC), the highest category of protection given to properties by a regional and state legislation. In the above-mentioned Decree, the identity and unity of the Alhambra, Generalife and Albayzín is recognized, since they form two of the four areas in which the Historical City of Granada is divided. Decree 107/2004 of March 23 whereby the Alhambra and Generalife is declared Cultural Interest Property in the category of Monument. The inscribed property is administered by the Council of the Alhambra and the Generalife, an autonomous body that includes a Plenary, a Permanent Commission, a General Management, and a Technical Commission; and the Albayzín Municipal Foundation, an autonomous body of the Granada Town Hall, in charge of World Heritage tasks in collaboration with other regional departments. The National, Regional and Local Government are represented in this Council.

The Direction Plan of the Alhambra contains a detailed analysis of the short, mid and long-term management challenges provides the overall management framework. It includes programs and measures for balancing tourism and heritage conservation, diversifying the tourism promotion in order to reduce the pressure on the monuments, and for the knowledge of the area as a sustainability strategy, among other lines of work. The Direction Plan of the Albayzín World Heritage property is facing similar challenges, such as the economic development of the business industry, the demography, accessibility issues, the tourism promotion, the emergency and evacuation system, a colour chart or building work’s license management. With respect to the town planning, The Alhambra, Generalife and the Albayzín have the Special Protection and Interior Reform Plan (1989 y 1990, respectively). All planning tools require a constant review and updating process to enhance decision-making and better respond to rising challenges so as to reduce the risk of urban development pressure. 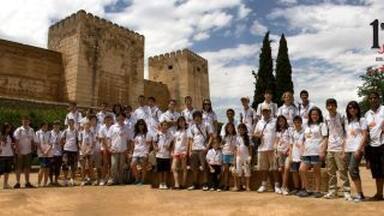