IUCN and World Heritage Centre have received reports from various sources on the devastating impacts of non-native feral rabbits and rodents on the vegetation and wildlife of Macquarie Island. The rabbit population has increased from 10,000 to 100,000 rabbits since the 1980s. The negative impacts of this overpopulation are in particular the destruction of hillside vegetation such as Tall Tussock (Poa foliosa) and Macquarie Island Cabbage (Stilbocarpa polaris), which in turn leads to more frequent and severe landslides and erosion gullies. This has significantly impacted on the aesthetic values for which the island was inscribed, and poses a severe threat to various species of seabirds inhabiting the site. The nesting habitat of three Albatross species is under threat from slope degradation. On Petrel Peak in the island’s south, the only known breeding site of the Grey-headed Albatross (listed as Vulnerable under Australian environmental legislation), almost the entire slope habitat has been cleared of tussock. As a consequence, landslides have occurred, and nest loss is expected if not already occurring. In a mudslide affecting Lusitania Bay in September 2006, an unknown number of King Penguins was buried under the mud. Rats pose an additional direct threat to seabirds by killing chicks in their nest.

The World Heritage Centre received a letter from the State Party in January 2007, which explains the measures taken by the Australian Government to tackle the problems associated with invasive species on the island, including:

· The Australian Government has contributed over AUS$ 1.5 million (approximately USD 1.2 million) to the Tasmanian Government to support vertebrate pest management on the island, including support for a project officer in the Tasmanian Parks and Wildlife Service, who is involved in planning the program for the eradication of rabbits and rodents on the island.

· A Draft Plan for the Eradication of Rabbits and Rodents from Subantarctic Macquarie Island has been developed, which an independent scientific review has found to be satisfactory and it has been approved. The report is online on the State Party’s website: http://www.environment.gov.au/heritage/publications/draft-macquarie-rabbit-eradication-plan.html

· Recognizing its responsibilities for the protection of the World Heritage values of the island, the Australian Government is currently in discussion with the Tasmanian Government regarding funding the proposed eradication plan (estimated cost: USD 20 million).

IUCN and the World Heritage Centre note with great concern the devastating impact of invasive species on parts of Macquarie Island, and stress the urgent need for action to prevent further, potentially irreversible damage to the property. It is essential that the Governments of Australia and Tasmania agree on funding the eradication programme as soon as possible, to ensure its implementation can be commenced in 2007. It appears that the implementation of the eradication plan would require around two years of planning and preparations, from the moment when the funding is ensured. Moreover, it is reported that for the eradication activities to be most effective, they must take place during the winter season (summer in the northern hemisphere). For this reason, unless a decision for the funding of the plan is formalized as early as possible in 2007, the actual eradication might be delayed until winter 2010, when the number of rabbits will have substantially increased. If it is formalised before mid 2007 then the eradication can take place in winter 2009, a whole year earlier.

2. Notes with concern the impact of populations of invasive rabbits and rodents on the values and integrity of the property;

3. Takes note, with satisfaction, of the decision taken by the Federal Government of Australia and the Government of Tasmania to jointly fund and implement a comprehensive rabbits and other rodents eradication plan;

4. Requests the State Party to ensure the implementation of the eradication plan as a matter of urgency and to report on the impact of eradication activities on non-target species as eradication begins;

5. Further requests the State Party to provide the World Heritage Centre with a copy of the final eradication plan as soon as possible to include a detailed implementation timetable, and a report by 1February2008 on the state of conservation of the property, in particular on the progress made on the implementation of the eradication plan, for examination by the Committee at its 32nd session in 2008.

2. Notes with great concern the impact of unchecked populations of invasive rabbits and rodents on the values and integrity of the property;

3. Commends the State Party for the measures taken, including the development of an eradication plan, but regrets that the implementation of the eradication plan has not yet started;

4. Requests the State Party to ensure that the necessary funding is provided in 2007 to enable the urgent implementation of the eradication plan in winter 2009;

5. Also requests the State Party to invite a joint World Heritage Centre/IUCN monitoring mission to assess the state of conservation of the property;

6. Further requests the State Party to provide the World Heritage Centre with a report by 1 February 2008 on the state of conservation of the property, in particular the status of the eradication plan and all measures taken to eradicate the populations of rabbits and rodents, for examination by the Committee at its 32nd session in 2008. 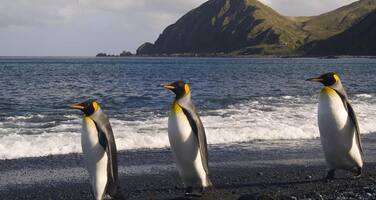