State of Conservation Old and New Towns of ... 2008
Print

a) Impact of fire at Cowgate;

b) Impact of rubbish containers.

The Old and New Towns were inscribed on the World Heritage List for their remarkable juxtaposition of two urban planning phenomena: the early mediaeval ‘herringbone’ layout of the Old Town on the crag, and the regular layout of the Enlightenment New Town, with Sir Walter Scott’s Waverley valley in between.

Edinburgh was for many years commended for its far-sighted town planning policies, which has allowed the city’s skyline and urban spaces to evolve but maintain their significance over time. This strategic approach has recently been revived by the City Council who recently commissioned a new skyline report, in order to protect key views. This is now out for consultation. The Council is also developing a strategic approach to the re-development of Prince’s Street, the main shopping street of the New Town, based on an analysis of its original layout and form. These new strategies are emerging at the same time as the city is facing development pressure from many different quarters, some of which could impact on the skyline and the overall character and outstanding universal value of the World Heritage property.

Part of the Old Town is now facing re-development by proposals known as ‘Caltongate’. The 3.46 hectares site which is highly visible from the Calton Hill, is on the North side of the Canongate, the main spine of the Old Town, and covers an area between Waverley Station and Holyrood. It includes the site of the old bus station garage.

On 6 February 2008, Edinburgh City Council were minded to grant consent for major elements of the Caltongate scheme, in spite of considerable opposition from the Edinburgh World Heritage Trust and others, including a specially formed Canongate Community Forum which has mobilised community support to keep homes for locals in the Old Town. The plans include a five-star hotel, conference centre, houses and offices. They would involve the demolition of one protected building, the rear of a second, and several tenanted houses. The Councillors’ decision has now been referred to Scottish Ministers for their determination.

The State Party submitted a report on 9 April 2008 which sets out the overall parameters of the scheme and its current status. It also reported that in spite of earlier concerns over the scheme, Historic Scotland were now supportive.

The report also provided details of the proposed development at Leith Docks site on the River Forth. This is some 2.5km from the World Heritage property around the old port for Edinburgh. The port activities have been moved to a new site. The proposals are still at the concept stage but Historic Scotland has expressed concerns at the height and bulk of the proposed developments which include a 28 storey tower. They consider that these proposals would create a new skyline for the docks that could compete with the skyline of the World Heritage property and alter its relationship with the river.

Another development scheme mentioned in the State Party’s report is that for the St James Centre. This is the redevelopment of a 1960-70s building in a prominent position in the New Town which currently has a negative impact on the property. This scheme is still at the early stages of planning and will provide regeneration of the immediate area. Historic Scotland supports in outline the proposals for the focus of the site but does not support larger towers that the developers have also suggested. These would not be in line with the city’s emerging skyline strategy and could have a major impact on the city’s skyline.

The State Party also provides an update on the Cowgate fire site. Proposals to re-develop the site are at the pre-application discussion stage.

The World Heritage Centre and ICOMOS are concerned that the scale of the Canongate development will impinge on the very strong, tight, grain of the Old Town and the overall coherence of its urban form and spaces, and impact negatively on views from Carlton Hill. Given the scale and location of the development; it could impact on the integrity and outstanding universal value of the World Heritage property.

As has been presented by the State Party, the Caltongate scheme could be followed by others of a similar or even larger scale and degree of intervention, such as the proposals at Leith Docks which could alter the relationship between the Old and New Towns and its port. Developers appear to be challenging the current limits of development in a way that could adversely affect the integrity of the World Heritage property. There is a need to understand how the overall coherence of the property and its distinctive skyline, both crucial to its outstanding universal value, might be protected while at the same time allowing sympathetic development.

3. Deeply regrets that the State Party has approved this scheme in June 2008 not complying with paragraph 172 of the Operational Guidelines;

4. Requests the State Party to invite a World Heritage Centre / ICOMOS joint Reactive Monitoring mission to the property to consider the overall state of conservation of the Old and New Towns, and particularly the impact of the Caltongate development on the integrity and Outstanding Universal Value of the World Heritage property, as well as the outline proposals for Leith Docks, the St James Centre, and other current proposals;

2. Adopts the following Statement of Significance for the Old and New Towns of Edinburgh, United Kingdom:

The remarkable juxtaposition of two clearly articulated urban planning phenomena. The contrast between the organic medieval Old Town and the planned Georgian New Town provides a clarity of urban structure unrivalled in Europe. The juxtaposition of these two distinctive townscapes, each of exceptional historic and architectural interest, which are linked across the landscape divide, the "great area" of Sir Walter Scott's Waverley Valley, by the urban viaduct, North Bridge, and by the Mound, creates the outstanding urban landscape.

The New Town, constructed between 1767 and 1890 as a collection of seven new towns on the glacial plain to the north of the Old Town, is framed and articulated by an uncommonly high concentration of planned ensembles of ashlar-faced, world-class, neo-classical buildings, associated with renowned architects, including John and Robert Adam, Sir William Chambers, and William Playfair. Contained and integrated with the townscape are gardens, designed to take full advantage of the topography, while forming an extensive system of private and public open spaces. The New Town is integrated with large green spaces. It covers a very large area, is consistent to an unrivalled degree, and survives virtually intact.

Edinburgh retains most of its significant buildings and spaces in better condition than most other historic cities of comparable value.

Criterion (ii): The successive planned expansions of the New Town, and the high quality of its architecture, set standards for Scotland and beyond, and exerted a major influence on the development of urban architecture and town planning throughout Europe in the 18th and 19th centuries.

Criterion (iv): The Old and New Towns together form a dramatic reflection of significant changes in European urban planning, from the inward-looking, defensive, wall medieval city of royal palaces, abbeys, and organically developed small burgage plots in the Old Town, through the expansive format Enlightenment planning of the 18th and 19th centuries in the New Town, to the 19th century rediscovery and revival of the Old Town with its adaptation of a distinctive Baronial style of architecture in an urban setting.

3. Urges the State Party to halt approval of this scheme until a mission has visited the property and reviewed the situation;

4. Requests the State Party to invite a World Heritage Centre / ICOMOS joint reactive monitoring mission to the property to consider the overall state of conservation of the Old and New Towns and particularly the possible impact of the Caltongate development on the integrity and outstanding universal value of the World Heritage property, as well as the outline proposals for Leith Docks, the St James Centre, and other current proposals; 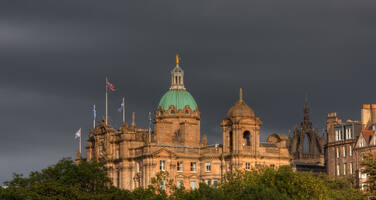