The City of Bath was inscribed for the way its grand neo-classical crescents, terraces, and squares spread out around its hills and within a green valley combine harmoniously, integrating architecture, urban design and landscape to create deliberately a beautiful city. By letter dated 31 January 2008, the State Party has submitted a Statement of outstanding universal value for the World Heritage Committee to approve which sets this out. This will be examined by the World Heritage Committee under Item 8B of the Agenda (Document WHC-08/32.COM/8B).

The area inscribed as the City of Bath encompasses the core of the city, an area of 2,900 ha (this was confirmed in 2005 by the State Party through the Retrospective Inventory) within which are some 4,919 protected buildings, including 638 listed at the highest protection level. At the time of inscription, ICOMOS considered the whole historic and monumental ensemble of Bath, to be of exceptional value. It did at the same time recognise that safeguarding its discontinuous monumental heritage could cause serious problems.

In the past two years proposals have been put forward for the large scale re-development of an extensive flat area alongside the river roughly in the centre of the World Hertiage property. This is known as “Bath Western Riverside”. The area is in the bowl of the valley and thus can be seen from higher parts of the city.

The proposals, to develop the area with a dominant cluster of large blocks of some 2,000 flats rising to six stories high and with three taller buildings anticipated to be nine stories high, next to the river, have met with considerable opposition from many conservation organisations and residents for the negative impact the development could have on views from crescents and terraces and on the overall visual and planning coherence of the property in its landscape setting. The area in question was open grassland until the end of the 19th and early 20th centuries when it was used for gas generation and other small-scale industries. In spite of many objections to the proposed development, initially including English Heritage, Bath and North East Somerset Council have indicated their intention to approve the proposal. In January2008, the relevant Minister decided not to hold a Public Inquiry. The proposals have not yet been confirmed as there are technical requirements to be met.

In February 2008, the Bath and North-East Summerset Council also indicated their intention to approve another large-scale project alongside the river, contrary to strong recommendations from their own officers. This is for a new Dyson Academy and would involve the demolition of a listed building and the construction of buildings with prominent glass facades that could be highly visible when illuminated.

The State Party in its report dated 18 February 2008, reiterates the significance of Bath for its Georgian architecture and planning and overall landscape qualities and acknowledges that the Bath Western Riverside site is highly visible from the river and hills surrounding Bath. However, the authorities consider that the 35 hectares development project is necessary to provide a new 21st century residential area.

Although there is general support for the continuing evolution of Bath, there is concern that the current proposals do not respect the outstanding universal value of the property, manifest across the city in its built form and landscape setting. The Bath Western Riverside project, among others projects, are not in line with the need for sympathetic development as set out in the management plan dated 2003. Both schemes should be considered by a joint World Heritage Centre / ICOMOS reactive monitoring mission before final approval is given by the responsible authorities.

2. Expresses its concern at the potential impact on the Outstanding Universal Value and integrity of the property of the proposed Bath Western Riverside and the Dyson Academy developments;

4. Also requests the State Party to invite a joint World Heritage Centre / ICOMOS Reactive Monitoring mission to the property to consider its overall state of conservation and particularly the possible impact of the Bath Western Riverside development and the Dyson Academy on the Outstanding Universal Value and integrity of the property;

2. Adopts the following Statement of Significance for the City of Bath, United Kingdom:

The Roman remains, especially the Temple of Sulis Minerva and the baths complex (based around the hot springs at the heart of the Roman city of Aquae Sulis, which have remained at the heart of the City's development ever since) are amongst the most famous and important Roman remains north of the Alps, and marked the beginning of Bath's history as a spa town.

The Georgian city reflects the ambitions of John Wood Senior, Ralph Allen and Richard 'Beau' Nash to make Bath into one of the most beautiful cities in Europe, with architecture and landscape combined harmoniously for the enjoyment of the spa town's cure takers.

The Neo-classical style of the public buildings (such as the Assembly Rooms and the Pump Room) harmonises with the grandiose proportions of the monumental ensembles (such as Queen Square, Circus, and Royal Crescent) and collectively reflects the ambitions, particularly social, of the spa city in the 18th century.

The individual Georgian buildings reflect the profound influence of Palladio, and their collective scale, style, and the organisation of the spaces between buildings epitomises the success of architects such as the John Woods, Robert Adam, Thomas Baldwin, and John Palmer in transposing Palladio's ideas to the scale of a complete city, situated in a hollow in the hills and built to a Picturesque landscape aestheticism creating a strong garden city feel, more akin to the 19th century garden cities than the 17th century Renaissance cities.

Criterion (i): Bath's grandiose Neo-classical Palladian crescents, terraces, and squares spread out over the surrounding hills and set in its green valley are a demonstration par excellence of the integration of architecture, urban design, and landscape setting, and the deliberate creation of a beautiful city. Not only are individual buildings such as the Assembly Rooms and Pump Room of great distinction, they are part of the larger overall city landscape that evolved over a century in a harmonious and logical way, drawing together public and private buildings and spaces in a way that reflects the precepts of Palladio tempered with picturesque aestheticism.

Bath's quality of architecture and urban design, its visual homogeneity and its beauty is largely testament to the skill and creativity of the architects and visionaries of the 18th and 19th centuries who applied and developed Palladianism in response to the specific opportunities offered by the spa town and its physical environment and natural resources (in particular the hot springs and the local Bath Oolitic limestone). Three men - architect John Wood Senior, entrepreneur and quarry owner Ralph Allen, and celebrated social shaper and Master of Ceremonies Richard "Beau" Nash - together provided the impetus to start this social, economic, and physical rebirth, resulting in a city that played host to the social, political, and cultural leaders of the day. That the architects who followed were working over the course of a century, with no master plan or single patron, did not prevent them from contriving to relate each individual development to those around it and to the wider landscape, creating a city that is harmonious and logical, in concord with its natural environment and extremely beautiful.

Criterion (ii): Bath exemplifies the 18th century move away from the inward-looking uniform street layouts of Renaissance cities that dominated through the 15th-17th centuries, towards the idea of planting buildings and cities in the landscape to achieve picturesque views and forms, which could be seen echoed around Europe, particularly in the 19th century. This unifying of nature and city, seen throughout Bath, is perhaps best demonstrated in the Royal Crescent (John Wood Younger) and Lansdown Crescent (John Palmer). Bath's urban and landscape spaces are created by the buildings that enclose them, providing a series of interlinked spaces that flow organically, and that visually (and at times physically) draw in the green surrounding countryside to create a distinctive garden city feel, looking forward to the principles of garden cities developed by the 19th century town planners.

Criterion (iv): Bath reflects two great eras in human history: Roman and Georgian. The Roman Baths and temple complex, together with the remains of the city of Aquae Sulis that grew up around them, make a significant contribution to the understanding and appreciation of Roman social and religious society. The 18th century redevelopment is a unique combination of outstanding urban architecture, spatial arrangement, and social history. Bath exemplifies the main themes of the 18th century neoclassical city; the monumentalisation of ordinary houses, the integration of landscape and town, and the creation and interlinking of urban spaces, designed and developed as a response to the growing popularity of Bath as a society and spa destination and to provide an appropriate picturesque setting and facilities for the cure takers and social visitors. Although Bath gained greatest importance in Roman and Georgian times, the city nevertheless reflects continuous development over two millennia with the spectacular medieval Abbey Church sat beside the Roman temple and baths, in the heart of the 18th century and modern city.

3. Recommends that assessment for statements of authenticity and integrity / statements of protection and management should be postponed to the 33rd session of the World Heritage Committee (2009) awaiting adoption of a methodology and an agreed format for Statements of Outstanding Universal Value for inscribed properties

2. Expresses its concern at the potential impact on the outstanding universal value and integrity of the property of the proposed Bath Western Riverside and the Dyson Academy developments;

4. Also requests the State Party to invite a joint World Heritage Centre / ICOMOS reactive monitoring mission to the property to consider its overall state of conservation and particularly the possible impact of the Bath Western Riverside development and the Dyson Academy on the outstanding universal value and integrity of the property; 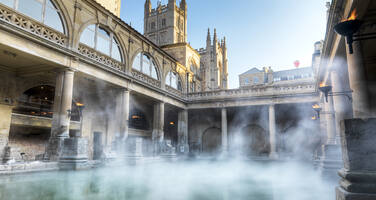