a) Demolition of historical buildings in the protected area of the Historical Centre;

b) Urgent implementation of the management plan in Xochimilco;

The state of conservation report was received by the World Heritage Centre in two portions on 31 January and 1 February 2011. One part is for the Historic Centre of Mexico City, the other one is for Xochimilco. Additional information was also received on 22 February 2011 regarding the intervention at the Bellas Artes Theatre.

a) The Historic Centre of Mexico City

Regarding the formulation of an integrated management plan, the State Party has made substantial progress in the drafting of the plan for the Historic Centre of Mexico City in co-ordination with several public and private institutions at the local and federal levels, including universities. The report indicates that the contents of the plan will be made available by spring 2011. The table of contents has been included in the report for reference. To support the implementation of the plan, two tools are foreseen. The first one is a Draft Law, to be published during the second quarter of 2011, will include guidelines and regulations to be established in the management plan. The second relates to the establishment of an integrated information system for the area with a view of strengthening decision-making. The report also provides information on the process undertaken by Mexican authorities regarding the participatory development of the management plan.

Regarding the 2009 World Heritage Centre/ICOMOS reactive monitoring mission recommendations, the report describes preservation actions undertaken within the Historic Centre. The actions, implemented with public and private funding, focus largely on the recovery and rehabilitation of close to 50 monumental sites which are destined for social and cultural purposes. Actions have also included the revitalization of public spaces, restoration of historic buildings, the implementation of alternative non-contaminant means of transportation, a façade restoration programme and awareness-raising and dissemination programmes. It was also indicated that the National Institute of Anthropology and History (INAH) has finalized an updated catalogue of historic monuments which will be published in 2011. New regulations in the fiscal code and fiscal incentives for owners have been put in place to avoid empty or neglected buildings, and the elaboration of a strategy and a decree for housing recovery within the Historic Centre have been drafted which have both been included in the report. No further demolitions have occurred since 2007. The report indicates that co-ordination efforts between INAH and the Federal District Government (FDG) have been strengthened and regulations have been established for reuse, restoration and adaptation of buildings.

The programme for the reorganization of street vendors was also enclosed in the report. It states that 26 000 vendors have been relocated to commercial squares, some of which are located where historic buildings were demolished in 2007. A second part of the programme aims to regulate the legality of their merchandise; ongoing follow-up from the “Fideicomiso for the Historic Centre” is being undertaken in this regard. The programme will be consolidated between 2011 and 2012 and will also cover other areas in the city.

It was indicated that three architectural projects for the street vendors would be constructed at three of the demolished building sites, including the area located in Regina 97. The projects will be carried out in conjunction with normal approval procedures, and the FDG has ratified its commitment to constructing high quality buildings intended for social and cultural proposes as agreed during the 2009 Mission. It is expected that works will commence in 2011. No information regarding the projects has been included in the report.

In a May 2010 report (attached to the state of conservation report), the State Party mentions the project of a tramway system that would extend from the Historic Centre to Buena Vista, with an investment of USD 1.3 billion. It states that on 29 September 2009, INAH approved the final route of the tramway and the project was sent by the selected company in May 2010 (the project was not attached). It is expected that the tramway will be finalized by the second half of 2011. In the state of conservation report of February 2011, no information is provided on the current status of implementation; technical specifications or graphic information

On 8 February 2011, the World Heritage Centre received from ICOMOS Mexico an extensive evaluation concerning the works undertaken at the Palacio de Bellas Artes. The report indicates that the restoration of this emblematic structure was not in accordance to international standards for conservation and the authenticity and integrity of certain significant elements of the ensemble have potentially been compromised. The State Party has also provided further official information on 25 February 2011 explaining the process undertaken for the renovation of the theatre. No technical information relating to the project was submitted to the World Heritage Centre prior to its implementation as required by Paragraph 172 of the Operational Guidelines.

A description of the activities undertaken for the implementation of the management plan has been included. The activities include the re-opening of the reforestation programme, plague control, soil retention and preservation, rural reforestation, control of invasive species, recovery of native and endemic species in Xochimilco and Tlahuac (ajolote, charal, acocil crayfish, Tlaloc frog, Mexican nymph, among others), social participation programmes, prevention and combat of forest fires, drain water management, drainage of the Xochimilco towns and community outreach activities.

Regarding the construction of Line 12 of the metro, the State Party indicated that its construction was planned 25 years ago. The original route has however been changed in order to avoid agricultural zones near the wetlands and Chinampas. It was indicated that the new route borders the Tlahuac Triangle out of the Chinampa areas (included in the 2006 Management plan) however appropriate measures are foreseen to reduce the impact within the zone. A location map has been included and it is indicated that the Tlahuac triangle is a low environmental evaluation zone; there are no chinampas, wetlands or presence of native flora. The Federal Government has acquired 106 Ha of land to be integrated as a lacustrine and Chinampa ecotourism conservation zone in order to stop urban growth and promote visits to the World Heritage property. An investment of 85 million pesos (around USD 7 million) from the collective transportation system will be used for the creation of a lagoon area as a buffer zone for the terminal. Landscape architecture, vigilance, environmental projects have also been taken into account. The State Party indicates that environmental studies were carried out and careful planning has been undertaken. The Line 12 route and 3D graphics of the future metro stations have been included. No information was submitted on the Environmental Impact Assessment, related technical documentation or the proposed timeframe for the implementation of these projects.

The World Heritage Centre and the Advisory Bodies take note of the progress made by the State Party in the implementation of the recommendations of the 2009 World Heritage Centre/ICOMOS reactive monitoring mission, particularly as it relates to the development of a management plan for the Historic Centre of Mexico City, the update of the inventory and the regulations regarding the demolition of historic buildings. They consider that the projects to be constructed where historic buildings were demolished, the Tramway and other projects planned in the property should be sent to the World Heritage Centre and the Advisory Bodies, prior to their approval and implementation as requested by Paragraph 172 of the Operational Guidelines. With regard to Xochimilco, the World Heritage Centre and the Advisory Bodies consider that the State Party should be urged to finalize the process to create the Management Unit and secure funding for its operation, and to continue implementing the recommendations of the Participatory management plan. They take note of the information submitted regarding Line 12 of the metro and request that the State Party submit detailed information, including the environmental and heritage impact assessments, related to planned projects in the Tlahuac Triangle.

5. Expresses its concern that no information was submitted, in line with Paragraph 172 of the Operational Guidelines, to the World Heritage Centre and the Advisory Bodies prior to the renovation works undertaken at the Palacio de Bellas Artes and further requests the State Party to submit a request for International Assistance to the World Heritage Centre for the organization of an international meeting to examine interventions undertaken and provide technical interdisciplinary recommendations to ensure the conservation of this twentieth century masterpiece;

6. Requests furthermore the State Party to submit, in line with Paragraph 172 of the Operational Guidelines, detailed and updated technical information on:

a) Urban projects for the three spaces where historical buildings were demolished in 2007, including the area located in Regina 97,

b) The tramway project and its current status,

c) The Environmental Impact Study, including the heritage impact assessment, of Line 12 of the metro;

5. Expresses its concern that no information was submitted, in line with Paragraph 172 of the Operational Guidelines, to the World Heritage Centre and the Advisory Bodies prior to the renovation works undertaken at the Palacio de Bellas Artes and further requests the State Party to submit a request for technical International Assistance to the World Heritage Centre for the organization of an international meeting to examine interventions undertaken and provide technical interdisciplinary recommendations to ensure the conservation of this twentieth century masterpiece;

6. Requests furthermore the State Party to submit, in line with Paragraph 172 of the Operational Guidelines, detailed and updated technical information on:

a) Urban projects for the three spaces where historical buildings were demolished in 2007, including the area located in Regina 97,

b) The tramway project and its current status,

c) The Environmental Impact Study, including the heritage impact assessment, of Line 12 of the metro; 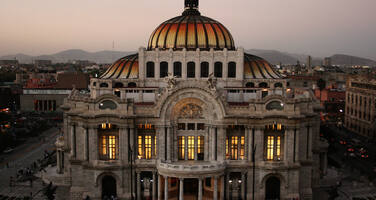