Factors identified at the time of the significant boundary modification:

On 10 February 2020, the State Party submitted a report on the state of conservation of the property, available at https://whc.unesco.org/en/list/766/documents/, and on 5 March 2020, the Integrated Management Plan (IMP) for the World Heritage property “Central Sikhote-Alin” (2019-2023). The State Party provides the following information:

The submission of an IMP is welcomed. However, it is noted that the components of the property are still largely managed separately and will need to be further consolidated and strengthened. It is recommended that the Committee requests the State Party to establish the Coordinative Council for integrated management as a matter of priority and implement other tasks proposed in the Joint Action Plan of the IMP that will enhance integrated management of the property.

The progress on finalizing the buffer zone around Bikin River Valley is welcomed. However, noting that the majority of its width is limited to 1km, the concern raised by the 2018 IUCN Evaluation of the extension regarding the potential capacity of the buffer zone to effectively provide ecological connectivity, remains. It is recommended that the Committee request the State Party to finalize the formalization of the buffer zone, consistent with the requirements of the Operational Guidelines and the recommendations of the IUCN Evaluation.

The establishment of the Council of Indigenous Minorities, continued collaboration to ensure indigenous peoples’ rights and interests are respected, as well as efforts to preserve the traditional way of life in the Bikin National Park all strengthen the efforts to engage local indigenous peoples, which were noted at the time of Decision 42 COM 8B.9. It is recommended that the Committee encourage the State Party to continue this work.

The increased anti-poaching activities and education are welcomed. Monitoring results showing an upward trend of the Amur tiger population are positive, however, no information was provided on the development of a long-term vision to enhance connectivity with other protected and non-protected tiger habitats, as was encouraged by the World Heritage Committee. In this regard, the commitment of the State Party to increase the territory of the Sikhote-Alin Strict Nature Reserve is noted, and it is recommended that the Committee request the State Party to provide further information on this process and how it would address the recommendations made by the Committee regarding a connectivity strategy for Amur tiger habitat.

It is noted with concern that large-scale logging around the Sikhote-Alin Strict Nature Reserve is having a negative impact on the Outstanding Universal Value (OUV) of the property, and that the dense network of timber harvesting roads is increasing every year, allowing access to remote areas and leading to greater risk of poaching and forest fires. To address these issues, it is recommended that the Committee reiterate its request to designate an adequate buffer zone for the component and consider strengthening logging regulations around the property.

Regarding tourism, although numbers remain relatively low despite a threefold increase due to the opening of a new direct flight from Vladivostok in 2015, it is noted that unregulated tourism, including visitors from nearby regions and recreational activities such as uncontrolled fishing and other resource use, are impacting negatively on the property’s OUV. It is therefore recommended that the Committee request the State Party to effectively regulate tourism and recreational activities and prepare a tourism management strategy that clearly defines the type of activities permitted and outlines how impacts of tourism and recreational use on the OUV of the property will be controlled. 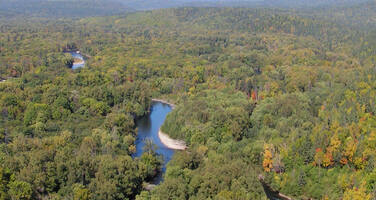