Total amount granted: in 2020, US$ 984,818 by the International Alliance for Heritage Protection in Conflict Areas (ALIPH) for the "Reconstruction and Rehabilitation of the Built Heritage of Bandiagara"

July 2019: Needs assessment mission on the built and intangible cultural heritage as well as objects and practices associated with the Cliffs of Bandiagara (joint Mali-UNESCO mission), conducted in the framework of the UNESCO Emergency Heritage Fund.

On 29 November 2019, the State Party submitted a state of conservation report on the property, available at http://whc.unesco.org/en/list516/documents/, followed, on 28 January 2020, by additional information and documents providing the following information:

The joint UNESCO/ICOMOS Reactive Monitoring mission to examine the overall management of the property, requested by the World Heritage Committee in 2016, was not possible due to the instable security situation.

The State Party report and that of the emergency evaluation mission of July 2019, provide substantial information in comprehending both the evolution of the particularly worrying security situation, as highlighted by the Committee at its 43rd session (Baku, 2019), and the actions carried out to ensure the safeguarding of the cultural heritage. It is regrettable that the Reactive Monitoring mission, requested on several occasions by the Committee since 2016, has not yet been implemented due to the instable security situation. The national mission report of July 2019 therefore constitutes at this point, the most complete in situ information on the state of conservation of the cultural values of the property. It should be noted that the mandate of the mission was distinct from that of a UNESCO/ICOMOS Reactive Monitoring mission to undertake a complete evaluation of the state of conservation of the cultural values that comprise the Outstanding Universal Value of the property.

The actions of the State Party, through the Cultural Mission of Bandiagara, the local communities and the ADI to ensure the preservation of the property and the safeguarding of the entire rich and living heritage in the face of multiple current adversities, notably through the implementation of International Assistance, are to be commended.

However, the insecurity situation resulting from intercommunity conflicts threaten not only cultural heritage in all its forms, but also damage all aspects of everyday life of the battered communities, often obliged to abandon their villages. It should be noted that the cultural heritage does not appear to be deliberately targeted, but is rather affected as the result of an uncontrollable situation. Indeed, the July 2019 mission recognises in its conclusion that the Cliff of Bandiagara property is on the way to becoming a lawless zone due to the increasing insecurity situation. It emphasises that following the summary evaluation and the rapid diagnosis of the state of conservation of the cultural heritage, it would be appropriate, without exaggeration, to draw the attention to the need for an urgent and efficient implementation of support actions for the property and its inhabitants.

Whilst acknowledging the mobilisation and actions carried out by the State Party and the commitment of all the stakeholders, and the resilience of the Dogon and Péuls communities, the gravity of the threats being faced by the property must be recognised. In the light of this alarming situation, it is important to support the State Party in the implementation of the Emergency Action Plan proposed by the July 2019 mission, to ensure not only the preservation of the movable and immovable heritage, but also to guide actions to secure the zone so that the heritage can serve as a vector for the enhancement of the cultural identities and practices of all the communities that live there, and more particularly in the reconciliation measures between the latter.  In this respect, the approval, in July 2020 by ALIPH of important funding to an amount of USD 984,818 for the reconstruction and rehabilitation of the built and tangible heritage (also including cultural objects) is to be especially applauded. This said, recalling that this is a mixed property, it is important that the State Party considers the impacts of insecurity in the context of natural values as well as cultural ones, including all management and intervention decisions. In this event, all emergency action undertaken to protect the cultural heritage (support to agriculture, stone buildings, etc.) should guarantee the protection of natural heritage values.

It is recommended that the Committee request the State Party to establish a multidisciplinary working group for a limited period with the capacity to act upon and supervise the implementation of the recommendations of the 2019 mission as well as the Emergency Action Plan, the objectives of which comprise, among others, the rehabilitation of the built heritage and traditional houses that have suffered damage, and the promotion of intercultural dialogue for peace, social cohesion and community living. As regards the types of heritage, such as tangible cultural heritage or the protection of cultural objects, it is recommended that the State Party also consult the Secretariats of other UNESCO Cultural Conventions. 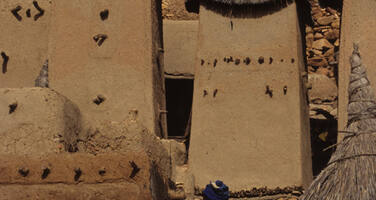