A joint World Heritage Centre/ICOMOS Reactive Monitoring mission visited the property in March 2019 (mission report available at http://whc.unesco.org/en/list/616/documents/). The mission report includes recommendations regarding the Management Plan for the property, the draft Metropolitan Plan, amendments to the Act for Cultural Heritage Preservation, Heritage Impact Assessment (HIA) processes, the buffer zone, and individual places and projects within the property.

Subsequently, on 25 February 2020, the State Party submitted a state of conservation report, with extensive annexes, available at http://whc.unesco.org/en/list/616/documents/, providing the following information:

On 9 November 2020, the State Party informed the World Heritage Centre, that an Environmental Impact Assessment (EIA) and Strategic Environmental Assessment (SEA) will be undertaken for the planned cable car project between Podbada-Troja-Bohnice located within the buffer zone of the property.

On 24 March 2021, the State Party organized the online seminar Integrating Urban Heritage in Urban Planning Processes with the support of the World Heritage Centre. The State Party presented the progress made in regard to the development of the Metropolitan Plan and UNESCO provided a perspective on the 2011 UNESCO Recommendation on the Historic Urban Landscape.

On 31 March 2021, the State Party provided further advice regarding the workshop outcomes, proposed preparation of a new zoning plan, implementation of the 2019 mission report recommendations, negotiations regarding the scale of new development in the Pankrác Plain area and a proposed architectural competition for revitalisation of the former Masaryk Railway Station.

The State Party continues to develop important strategic documents, including amendments to the Act for Cultural Heritage Preservation and a draft Building Act, the Management Plan for the property (now largely completed) and the City of Prague Metropolitan Plan. These processes do not yet adequately address the findings of the 2010 and 2019 missions or previous Committee Decisions. It is welcome that the State Party organized an online seminar Integrating Urban Heritage in Urban Planning Processes, with the support of the World Heritage Centre, and as recommended by the 2019 mission. It is noted that at this workshop, the State Party presented progress with development of the Metropolitan Plan and that the relevance of the 2011 Recommendation Historic Urban landscape (HUL Recommendation) was highlighted.

With regard to the cable car project planned in the buffer zone, an initial technical review by ICOMOS concluded that it will not be generally visible from the property. The proposed architectural competition for revitalisation of the former Masaryk Railway Station is welcome and it is recommended to remind the State Party of the provisions in Paragraph 172 of the Operational Guidelines and the obligation to submit proposals to the World Heritage Centre for review by the Advisory Bodies for any major interventions in and around the property that might have an impact on its OUV, including the guidelines for the design competition entries or their Terms of Reference.

Notwithstanding the recent workshop, the lack of primacy afforded to the retention of the OUV remains an issue for the property. Furthermore, the concern expressed in the property’s Statement of the OUV that: the integrity of the Historic Centre of Prague is threatened by the pressure of the developers wishing to build oversized new buildings in the historic centre and its buffer zone persists. The 2019 mission concluded that although the property is generally in a good state of conservation, potential danger to its OUV exists, as defined in Paragraph 179 of the Operational Guidelines. As an example, the application of height limits originally set for the Pentagon to the Pankrác Plain resulted in approval of the inappropriate Rezidence Park Kavčí Hory project. The recent information provided to the World Heritage Centre on ongoing negotiations with the developer regarding the scale of the new development in the Pankrác Plain area is welcome. It remains concerning that since 2010, the State Party has not otherwise responded to recommendations and requests with respect to large-scale development projects proposed within the buffer zone and the wider setting of the property, nor adopted a high-rise limitations plan, in order to avoid a visual change in the historic urban landscape of Prague.

Comprehensive measures are required to remove potential threats to the OUV of the property, particularly modifications to the detailed building height controls across the city should be included in the draft Metropolitan Plan, in accordance with the findings and recommendations of the 2019 mission. The identification and protection of designated heritage reserves and monuments, and that of the World Heritage property and its buffer zone should also be integrated in the Plan. It is recommended that the State Party and its responsible agencies recognize that high-rise construction on the Pankrác Plain, including buildings erected prior to inscription of the property, is inconsistent with retention of the OUV and that the Committee’s Decision 32 COM 7B.86 applies to the totality of the Pankrác Plain. It is also recommended that the State Party implements an immediate moratorium on buildings above the general height of their surroundings on the Pankrác Plain (as defined in Figure 32 of the 2019 mission report) and gives priority to developing and implementing appropriate regulations, including a high-rise limitations plan, with specific regulations to prevent  the negative impact caused by the existing cluster of high-rise buildings. The State Party may be reminded that HIAs are vital for development projects and activities that are planned within or around a World Heritage property in conformity with Paragraph 118bis of the Operational Guidelines. HIAs for all proposed projects, together with an assessment of cumulative impacts of projects within the property, its buffer zone and its wider setting is needed to be undertaken and submitted to the World Heritage Centre, for review by the Advisory Bodies, focusing on their potential impact on the OUV of the property. 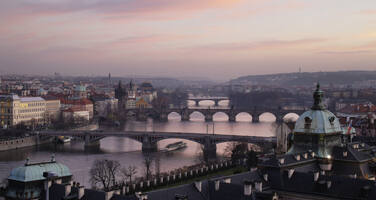