On 3 February 2020, the State Party submitted a report on the state of conservation of the property, an updated version of which was submitted on 28 January 2021. These reports, which are available at http://whc.unesco.org/en/list/277/documents/, provide the following information on the property:

The State Party requests that a mission be dispatched to assess damage at the property. On 3 September 2020 the State Party submitted an additional ‘Damage Assessment Report Status Study’ for the property. This report includes general information on the importance of the rationale and process for recovery from damage, a narrative about the occupation of the property between 2015 and 2017, a small selection of photographs of damage being inflicted, brief descriptions and photographs of damage to individual components, and high-level recommendations, including reiteration of the request for a mission.

The State Party has proceeded with addressing the lack of complete and detailed information on the state of conservation of the property, including through the support of ALIPH and international experts. The already submitted damage assessment report together with a set of recommendations is a welcome step. The overall approach suggested in this report might contribute to the identification of the Desired State of Conservation for Removal of the property from the List of World Heritage in Danger (DSOCR). However, more detailed assessment of the damage remains necessary in order to facilitate the protection, repair, rehabilitation and reconstruction of the important monuments. Tables, drawings and systematic photo surveys of damaged monuments, and graphics showing the extent of damage are needed to scope the required repair and reconstruction works and to inform a comprehensive conservation plan.

As has been previously recommended, protection measures need to be taken to prevent any further damage to the property, or looting. It is recommended that the Committee again encourage the State Party to address priority actions, noting that protection and emergency stabilization work should be undertaken only in cases where collapse or further damage is imminent, and according to the principle of minimal intervention. It is recommended that the Committee remind the State Party of its previous request that remedial and repair works should be guided by a comprehensive conservation plan prepared in full consultation with the World Heritage Centre and the Advisory Bodies. The State Party has indicated that the weathering of building materials has had a major impact at the property. Therefore, a comprehensive and long-term conservation plan is crucial.

Notwithstanding current challenges, it is desirable that the process should commence for the eventual removal of the property from the List of World Heritage in Danger. It would be appropriate for preliminary work on the DSOCR to be initiated remotely, through exchanges between the World Heritage Centre, ICOMOS, ICCROM and the State Party. Towards this end, a first online meeting with the State Party took place in January 2021. However, it is essential that the state of conservation of the property be clearly documented and verified. The approach and techniques adopted for this property may become a model for other Iraqi properties on the List of World Heritage in Danger.

It is again recommended that, when security conditions permit, a joint World Heritage Centre/ICOMOS Reactive Monitoring mission takes place to further assess the damage and to discuss with the State Party the short-, medium- and long-term goals and actions required to protect the property. This would be particularly relevant in order to facilitate implementation of proposed corrective measures and achievement of the DSOCR. 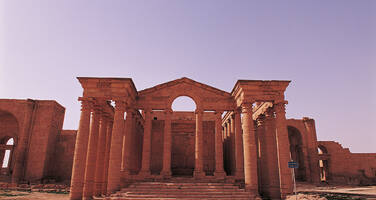