On 3 February 2020, the State Party submitted a report on the state of conservation of the property, an updated version of which was submitted on 28 January 2021. These reports, which are available at http://whc.unesco.org/en/list/1130/documents/, provide the following information:

Although there is still a lack of detailed and comprehensive information about the state of conservation of the property, the State Party has referred to the fact that a damage assessment report will be provided. It is recommended that the Committee reiterate its request to the State Party to submit, for review by the World Heritage Centre and the Advisory Bodies, all reports prepared related to the damage assessment and interventions it has undertaken at the property. It is recommended that future interventions be addressed within the framework of an overall assessment of damage and risks and a comprehensive conservation plan prepared in full consultation with the World Heritage Centre and the Advisory Bodies.

The State Party has carried out urgent intervention measures, aiming to mitigate the impact of threats at the property, including potential flood and water damage. As previously recommended, any protection and emergency stabilization work should be undertaken only in cases where collapse or further damage is imminent, according to the principle of minimal intervention. In addition, any elements found at the property and resulting from conflict-related damage such as intentional destructions, should be retrieved and gathered in a safe location, and the boundaries of the property protected from illegal excavations and looting. The State Party’s efforts to address immediate risks at the property are appreciated.

It is regrettable that the plans to construct the Makhool dam have been re-activated. When the property was first inscribed on the World Heritage List, the large dam project was considered as a major threat justifying concurrent inscription of the site on the List of World Heritage in Danger. Therefore, the State Party was encouraged to relocate or cancel the project. A joint World Heritage Centre/ICOMOS Reactive Monitoring mission to the property in 2011 reiterated concerns regarding the construction of the dam, and recommended that the State Party propose and implement preventive measures. In 2013, on the basis of the state of conservation report that had been submitted, the Committee welcomed the announcement by the State Party of the then cancellation of the project (Decision 37 COM 7A.24).

Considering the foreseen impact that the dam would have on the property and numerous other archaeological sites, it is recommended that Committee again request the cancellation or relocation of the project. It is further recommended that the Committee specifically reaffirms the potential danger to the OUV of the property arising from the proposed dam as it did in 2003, at the time of inscription of the property on the List of World Heritage in Danger in accordance with Paragraph 179(b) of the Operational Guidelines.

It is once again recommended that a joint World Heritage Centre/ICOMOS Reactive Monitoring mission take place once security and sanitary conditions permit, in order to assist in assessing the condition of the property, as a preparatory step for the development of a comprehensive conservation plan and formal identification of the Desired state of conservation for removal of the property from the List of World Heritage in Danger (DSCOR).


The conflict in Iraq between 2014 and 2017 led to a massive humanitarian crisis and resulted in significant damage to Iraq’s cultural heritage through deliberate destruction, illegal excavation and looting, as well as collateral damage. Three of Iraq's World Heritage properties have suffered as a result of this conflict, namely Samarra Archaeological City, Ashur (Qal'at Sherqat) and Hatra. In addition, the archaeological sites of Nimrud and the Ancient City of Nineveh, which are on Iraq’s Tentative List, have also been greatly damaged through acts of deliberate destruction. In the Old City of Mosul, included in the Tentative List since August 2018, significant sites, monuments and buildings were systematically targeted, including historical and religious heritage sites such as al-Nouri Mosque and its iconic al-Hadba Minaret.


The conflict situation in Iraq has directly affected its three properties on the List of World Heritage in Danger, and some of its Tentative List sites to varying degrees. The deliberate destruction of cultural heritage during the conflict period between 2014 and 2017 is of particular concern. Owing to the security situation in several parts of the country and the very limited resources, Iraq’s other World Heritage properties and Tentative List sites have been indirectly affected. In addition, the illegal excavation and looting of archeological sites have caused extensive loss and irreversible damage – although there have been several incidents of restitution of cultural property in recent years. 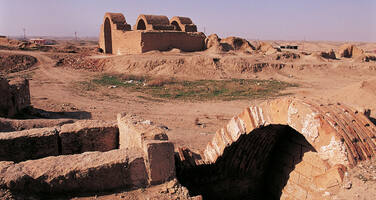