On 15 March 2019, the State Party submitted a state of conservation report, which is available at http://whc.unesco.org/en/list/34/documents/, and reports the following:

The State Party is aware of the threats to the property and is making some progress on a range of issues to improve its state of conservation. This includes development of the Management Plan, identification of boundaries and buffer zones, community awareness and disaster risk management plans.

However, with regard to threats, many have existed since at least 1998, and their increasing significance is a matter of concern. Recent heavy rains in Accra underscore the environmental pressures on the property. There are indications that some components are impacted by abandonment, the accelerated degradation of structures and the potential or actual disappearance of ruins. Several of the components comprising partial structures and traces of former fortifications might no longer exist.

The anticipated progress with the development of a Management Plan is a positive step. This should consider the current lack of effective site management for most components, as well as identified threats. At present, some level of protection and management is only available for the three large forts. The other forts are mostly abandoned, with accelerated degradation due to rising salts and humidity, lack of effective management, and the possibility of climate change impacts.

The steps taken to establish buffer zones for the property are welcome. However, the persisting absence of buffer zones may represent a particular threat as possible future large scale projects in and around the property's components, such as in Elmina and at Fort Amsterdam (see below), cannot take into account the necessary measures that would respect the protective provisions provided by these buffer zones. The delineation of a buffer zone of an adequate size for each component and the development of effective protection regimes is therefore of utmost urgency.

With regard to the "Elmina Heritage Bay" tourism development project at St. George's Castle in Elmina, the World Heritage Centre sent a letter to the State Party in October 2018, in line with Paragraph 174 of the Operational Guidelines, requesting further information on this project. On the basis of the material then submitted to the World Heritage Centre by the State Party in December 2018, a preliminary assessment was carried out, indicating potential negative impact on the property.

The works at Fort Amsterdam will involve the restoration and reconstruction of damaged areas of the fort and its subsequent adaptive re-use. The State Party reports that discussions regarding the project have been underway since 2003, but as already for the "Elmina Heritage Bay", it is regrettable that no prior information was submitted to the World Heritage Centre in accordance with Paragraph 172 of the Operational Guidelines, before notification in the State Party’s report.

The State Party invited a joint World Heritage Centre/ICOMOS/ICCROM Advisory mission to visit the property from 28 April to 2 May 2019 to assess restoration and development projects at the two components of Fort Amsterdam and St. George's Castle (Elmina) in addition to the arrangements made to commence the preparation of the Management Plan. The mission report will be available at http://whc.unesco.org/en/list/34/documents/ before the 43rd session of the World Heritage Committee and its results shared in advance with the Committee.

Given the range, longevity and significance of issues facing the property, it is recommended that a joint World Heritage Centre/ICOMOS/ICCROM Reactive Monitoring mission be carried out in early 2020 to consider the state of conservation of all the components of the property and the potential threats they are facing, the implementation of the recommendations from the Advisory mission, potential projects proposed, and progress with the delineation of buffer zones and the development of the Management Plan. 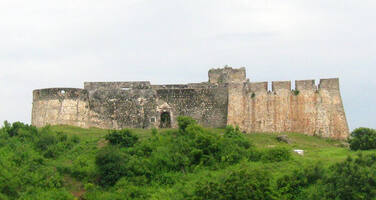