On 17 January 2019, the State Party submitted a report on the state of conservation of the property, available at http://whc.unesco.org/en/list/956/documents/.  Progress on a number of conservation issues addressed by the Committee at its previous sessions is presented in this report, as follows:

Following the reactive monitoring mission in May 2017, the Committee had commended the State Party's initiatives for better governance and conservation of the property, while making recommendations to address the continued vulnerability of the property. The latest report submitted by the State Party appears to confirm this positive trend in the efforts made as a result of these recommendations.

Compared to previous years, it is commendable that the State Party has focused its efforts on improving the governance of the property, aiming in particular at reducing the multiplicity of participants in its management, by harmonizing it through the creation of the Regional Commission and the development of a Triennial Priority Rehabilitation Action Plan for Saint-Louis. The allocation of premises to APIX within the Gouvernance, favouring collaboration with the Regional Commission, is welcomed. It is also significant that this Commission, supported by a dedicated gendarmerie brigade, has already been able to intervene in 2018 on a number of cases, with the help of several summonses as part of regular checks.

An inventory of the buildings in danger, continued in 2019, which made it possible to set up a three-year Priority Rehabilitation Action Plan, is also welcome, but would benefit from having quantified data on financial needs to guide rehabilitation actions.

The establishment of an Emergency Fund for the Safeguarding of the Architectural Heritage of Saint-Louis is appreciated. However, the State Party does not provide information on the allocation of this Fund, and it is recommended that the State Party develop a fundraising strategy and give it greater visibility.

In addition, the State Party does not provide information on the development of a permanent support team for the architect-urbanist, or on the development and implementation of a monitoring system to record the conditions of the buildings over time, as requested by the Committee in 2017.

Overall, a recovery in the dynamics for the conservation and management of the property is noted, including major projects for its various major components or for the protection of the coast.

Nevertheless, these different actions are today only at the planning stage or at the beginning of operationalization. This does not yet make it possible to measure their impact over time. Thus, the inventory of buildings is still incomplete, and the PAP proposes only preliminary measures, such as consultations, studies and calls for tenders, with no action formulated after August 2019. Similarly, a follow-up plan for the geomorphological evolution of the mouth of the Senegal River is not yet established, and the State Party only provides a pre-report of a feasibility study of the Senegalese Integrated Coastal Management Programme, dating from December 2018, with a view to combating coastal erosion. In the same way, the strengthening of the communication is at its beginnings, with the APIX.

Also of concern are the large-scale projects planned by the State Party and the TDP-FDA project, notably the development of the Grand Mosque, the rehabilitation of the Cathedral, or the requalification and redevelopment of the Places Faidherbe and Pointe-à-Pitre, wharves and embankments.  Indeed, the information provided is insufficient to provide an adequate overview, and it is recommended that the Committee remind the State Party of the urgency to submit all available documentation on these projects, in accordance with paragraph 172 of the Operational Guidelines and recommendations of the 2017 mission.

Concerning the development of the Great Mosque, the World Heritage Centre sent a letter to the State Party on 9 February 2019, in accordance with paragraph 174 of the Operational Guidelines, following information received from third parties on the progress of the project. In its response of 22 February 2019, the State Party informed of the maintenance of only one minaret, after suppression of work on a second, which was originally planned. This does not lessen the concerns of the 2017 mission with regard to the construction of new imposing minarets and its recommendation to adjust the architectural project to comply with the current regulations set out in the Safeguarding and Enhancement Plan of Saint-Louis (PSMV).

Concerning the long-term management of the property, in spite of significant actions in particular for the follow-up and monitoring of the interventions on the buildings, the Heritage House must again become operational, provided with a manager and a unit dedicated to all the aspects of management, as well as sufficient resources for its mission. 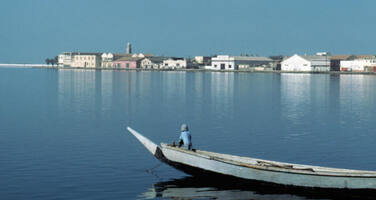