b) No clearly defined boundary or buffer zones

On 21 January 2011, the State Party submitted a state of conservation report to the World Heritage Centre. This report includes the proposal for boundary modification of the property as requested in Decision 32 COM 8B.53. In response to Decision 33 COM 7B.66 adopted by the World Heritage Committee at its 33rd session (Seville, 2009), the State Party provided information on three main actions taken:

a) Completion of the comprehensive Conservation Master Plan (CMP)

The report traces the history of efforts to develop a Conservation Master Plan for the property back to 2002, including suspension of these efforts from 2003 to 2007 in order to permit development of an urban master plan for Lijiang. Upon reactivation of this process, a UNESCO advisory mission visited the Old Town of Lijiang in November 2008 and confirmed the findings of the joint World Heritage Centre/ICOMOS reactive monitoring mission of January 2008 that the property is currently witnessing progressive loss of integrity and authenticity due to new tourism and other commercial developments in and around the inscribed cluster sites of Dayan town, Shuhe housing cluster, and Baisha housing cluster. The advisory mission was impressed with the preparation of the Conservation Master Plan but noted that work was not yet complete and that new threats to the property’s integrity seemed to be emerging such as to the east between the existing built-up area of Dayan and the proposed railway station. Current efforts to complete the Conservation Master Plan have focused on redefining the boundaries of the three components of the Lijiang inscription (Dayan Old Town, Baisha and Shuhe and their respective buffer zones in order to be sure what territory the Conservation Master Plan covers). As a result of the various iterations developed and reviews at national level (State Administration of Cultural Heritage - SACH) and local level (Lijiang Peoples’ Government), definitive determinations of “property area” and “buffer zone” for all three components have been agreed. However the State Party does not provide information about the approach of the CMP to address the progressive loss of integrity.

As a part of providing a clear management focus for the CMP, the State Party has submitted to the World Heritage Centre, on 21 January 2011, a Statement of Outstanding Universal Value (SOUV) of the property for review by the World Heritage Committee within the framework of the Periodic Reporting exercise for Asia and the Pacific region.

The State Party reports that the Conservation Master Plan for the property will be further developed and improved to reflect the protection for the extended buffer zone of Dayan and the larger buffer zones for Baisha and Shuhe.

Protection zone adjusted in January 2010 and modified in October 2010

In January 2010, China’s State Administration of Cultural Heritage (SACH) sent an expert panel to Lijiang to provide consultation on the modification to the protection zones. Following this initiative, a new proposal was submitted to SACH which subsequently put forward further modifications in September 2010.

Although the information on boundary and buffer zones modification was provided in the State Party report, no original copy of the topographic map showing the property and its buffer zones was submitted.

Protection of the area between the three components of the property

The current Conservation Master Plan demarcates the entire Lijiang Bazi (terraces) between the property areas and buffer zones as an environmental co-ordination zone. It established strict requirements on new construction defining protective measures for natural environment features and the eco-systems in the area between the three components.

The State Party reports progress in strengthening the Lijiang Management Bureau in clarifying its role in enforcing the legal framework in place, building the protection and management system through its 8 functional departments, establishing scientific research and property development guidelines, including the Conservation Master Plan, development of an in-situ monitoring system for natural and cultural assets, digital systems for protection, measures for protection of traditional culture, publication of owner’s manuals for building protection and repair, and ongoing training and awareness building for heritage managers and others.

3. Notes with satisfaction the efforts of the State Party's national and local authorities to strengthen the protection of the property and its setting;

3. Notes with satisfaction the efforts of the State Party’s national and local authorities to strengthen the protection of the property and its setting; 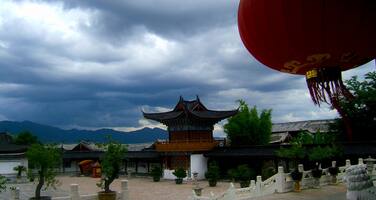