On 30 November 2018, the States Parties submitted a joint report on the state of conservation of the property, available at http://whc.unesco.org/en/list/1380/documents/, with the following updates:

The States Parties have made commendable progress in strengthening their anti-poaching efforts including through the deployment of special wildlife crime units to all components of the property. Nevertheless, the continued presence of poaching activities, especially of elephants, is of utmost concern and affirms the need to further strengthen law enforcement. The World Heritage Centre received further information in November 2018 about the resurgence of elephant poaching in the CAR component of the property, resulting in at least six animals killed.  A letter was sent to the State Party of CAR on 8 January 2019, in accordance with Paragraph 174 of the Operational Guidelines, to request further information about this poaching incident. To date, the State Party has not responded. It is recommended that the States Parties are requested to further strengthen law enforcement efforts, including through transboundary patrols and by following up the judicial process of apprehended poachers.

The removal of illegal mining licences in the buffer zone of the Congolese component is welcomed. However, the delivery of new licences in the buffer zone in Cameroon in 2016 is of concern and the State Party of Cameroon should be requested to take action to ensure their cancellation.  The World Heritage Centre sent a letter to the State Party of Cameroon on 8 January 2019 to request further information such as EIA and maps related to the attribution of these concessions. To date, this letter remains unanswered.

To prevent future cases of mining licences being issued in the property or its buffer zones, the States Parties should be recommended to take a more proactive approach and strengthen the information exchange between the mining and conservation departments before granting exploration or exploitation permits.  For any activities proposed for outside of the buffer zones, the States Parties should ensure that a comprehensive EIA is undertaken, with a specific assessment of the OUV of the property, before allowing any activities to take place.

The progress achieved in certifying the forestry concessions in the buffer zone is noted, but further efforts are needed to ensure that this is completed. Noting that the EIA for EPA 189 was supposed to have been submitted to the World Heritage Centre in December 2018, and that the EIA for EPA 190 is near completion, it is recommended that the States Parties be requested to submit these to the World Heritage Centre for review by IUCN, as soon as they are available.

The State Party’s intention to use the IUCN’s Advice Note in developing the EIA for the Ouesso-Bangui road is appreciated. It should be reiterated that the road construction should not start until the EIA has been completed and submitted to the World Heritage Centre for review by IUCN, in order to determine the potential impact on the OUV of the property, including its integrity.

The efforts to better involve local communities and recognize the rights and traditional livelihoods of the indigenous Baka communities as well as efforts to ensure the respect of human rights by park rangers are welcomed and need to be further strengthened. 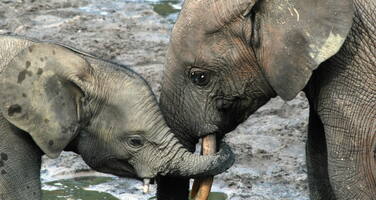