On 31 January 2019, in response to Decision 42 COM 7A.14, the State Party submitted a state of conservation of the property, available at the address http://whc.unesco.org/en/list/119/documents/, which contained the following information:

The progress achieved by the State Party in the rehabilitation, conservation and management of the property and in the implementation of the corrective measures is favourably welcomed. As is the continued support by the principal partners, notably the European Union (EU), and the MINUSMA, in the implementation of the Action Plan of Phase II for the rehabilitation of cultural heritage and the safeguarding of the ancient manuscripts. The compelling results bear witness to the efficacy of this mobilization by the State Party and the international community, in particular the interventions, among others, on the Al Farouk monument, the Sidi Yahia and Sankoré Mosques, the cemeteries containing the mausoleums of the saints, the local museums and the safeguarding of the ancient manuscripts.

All these actions have in fact enabled the consideration, in a concrete and perceptive manner, of cultural heritage in all its facets, thus also accentuating its enhancement by and for the local community.

However, an important number of recurring issues need to be further attended to. This is not entirely explained by the still unstable security situation, and which represents a major obstacle to the efforts deployed for the implementation of the corrective measures.

Thus, the Cultural Mission continues to face a lack of staff, sufficient operating budget and office equipment for it to ensure the efficient management of the property, particularly the implementation of the 2018-2022 Management and Conservation Plan. To this, according to the State Party, is added the disinterest and inaction of the municipal and regional authorities, despite an important awareness-raising action and lobbying with the Town authorities, the district chiefs, the Prefect and the Governor of the region.

Consequently, the property suffers in synergy of action on the part of all these actors. It is therefore recommended that the Committee reiterate its recommendations to the State Party to increase the financial, logistical and human resources of the Cultural Mission, and strengthen the awareness-raising and consultative actions to stimulate interest, interaction and coordination of the actors at every institutional level.

In regard to the implementation of the Plan for protection and maintenance for collective repair works of the victims of Ahmad Al-Faqi Al-Mahdi, author of the destruction of the Timbuktu mausoleums and the secret door of the Sidi Yahia Mosque, it is commendable that  the Fund of the International Criminal Court (CCI) for victims has initiated consultations with the local civil society, the management committees of the Sankoré and Djingareybar Mosques and those responsible for the mausoleums, proposing to foresee collective repair work, including a strengthening of the operational and logistical capacities of the Cultural Mission.

With regard to the components of the property, it is noted that the Djingareybar Mosque and the mausoleums did not benefit from conservation work due to heavy rains. The vibrations caused by the passage of heavy military equipment remains worrisome and the Committee could reiterate its request to the State Party to study, together with the MINUSMA, options for the redirection of traffic in the vicinity of the buildings concerned to mitigate these effects.

In addition, pollution of the ancient fabric of the town and the cemeteries by illegal installations and rubbish, while having a negative visual and environmental impact, can also prevent access to the mosques and mausoleums in the case of emergency, as indicated by the Regional Directorate for Civil Protection.  It is therefore recommended that the State Party call upon the municipal and regional authorities to resolve this situation.

Other recurring challenges concern the security of the cemeteries containing the mausoleums, silting or also improvement in the reception of the faithful attending the mosques. As proposed by the State Party, it would appear useful to foresee future measures, such as solar-powered electricity of the Djingareyar and Sankoré mosques, the creation of maintenance funds for the mausoleums, support for the masons’ corporation and the continued strengthening of the enclosures of the cemeteries. In respect of all these activities, it is recommended that the Committee renew its appeal to the entire international community to support the efforts of the State Party and contribute to the implementation of Phase II of the Action Plan for the rehabilitation of cultural heritage and the safeguarding of the ancient manuscripts.

Taking account of all these comments, it is recommended that the Committee maintain the property on the List of World Heritage in Danger. 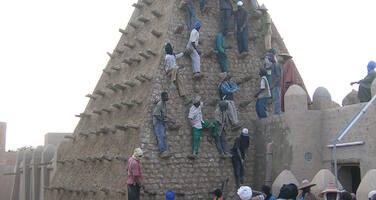