On 8 January 2019, the State Party submitted a state of conservation report for the six Syrian World Heritage properties, which is available at https://whc.unesco.org/en/list/23/documents/, and includes updated information on progress and challenges in a number of conservation issues addressed by the Committee, as follows:

In March 2019, and in the framework of its Memorandum of Understanding with UNESCO on the protection and restoration of cultural property in conflict areas, especially in the Middle East, the State Hermitage Museum submitted to the World Heritage Centre a set of three-dimensional models for the Temple of Bel and surveys of the Geographic Information System (GIS) that they conducted at the property and surroundings

The World Heritage Centre has been informed that the University of Lausanne is implementing a documentation project in open access entitled “Collart – Palmyre 2017-2021” and has been invited to participate in an international meeting that will be held on 16-17 December 2019 to foster the exchange of documentation on Palmyra among the international community of researchers.

It is recommended that the Committee express its concern that the portico of the Temple of Bel and the Triumphal Arch are at risk of collapse due to the lack of funding available for emergency consolidation works. No information has been provided on potential rehabilitation projects.

It is recommended that any project planned at the property be submitted to the World Heritage Centre for examination by the Advisory Bodies, prior to commencing any works in conformity with Paragraph 172 of the Operational Guidelines.

The World Heritage Centre is planning to organize an international meeting for the recovery of the property at UNESCO Headquarters in December 2019. The objective of the meeting will be take stock of the situation at the property since its liberation in 2017, and to initiate discussions with the international community of experts on defining optimal approaches for the recovery of the property. Exchanges with the University of Lausanne are being initiated to ensure complementarity of meetings. 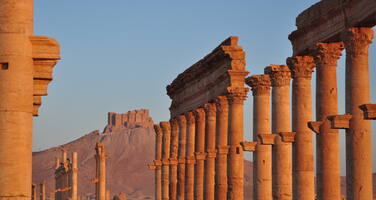