Total amount granted: USD 100,000 from the Nordic World Heritage Fund for training and documentation aiming at the preparation of the Nomination File.

On 1 February 2018, the State Party submitted a state of conservation report, which is available at http://whc.unesco.org/en/list/276/documents. Progress in a number of conservation issues addressed by the Committee at its previous sessions is presented in this report, as follows:

On 30 March 2018, the State Party briefly reported that more than 200 m of enclosures of the northern site of Sur Ashnas have been damaged by explosions during combat in the City of Samarra, and that mortar shelling damaged the western side of the octagonal Qubbat al-Sulaybiyya, where a hole and cracks are visible.

The State Party feels that the current security situation is stable, thus allowing conservation, restoration and reconstruction work to be initiated on the ground. It highlights the need for technical missions to conduct a central assessment of the damage incurred at World Heritage properties, as was done with the technical mission to Palmyra in April 2016, after its liberation. It recommends engagement with UNESCO, the international community, universities and scientific institutions to fulfil the international commitments that have been made, and to address long-term shortcomings in the areas of management and protection. It also recommends convening an international conference on Iraqi heritage, to be followed by donor countries. It further recommends enforcing prohibitions on illicit trafficking of cultural property from Iraq.

The continuing lack of information about the state of conservation of the property remains of very grave concern.

It is recommended that the Committee request again the State Party to submit, for review by the World Heritage Centre and the Advisory Bodies, a copy of the Samarra Department of Antiquities’ documentation that was mentioned in the previous state of conservation report. It is further recommended that the Committee reiterate its recommendation that a full and comprehensive assessment be carried out in close collaboration with the UNESCO Office for Iraq, as soon as security conditions permit and before any remedial actions are undertaken. As previously recommended, any required emergency stabilization work should adhere to the principle of minimal intervention. 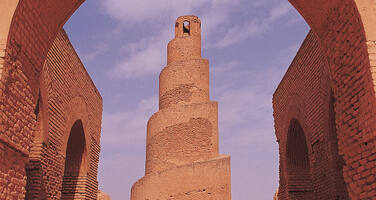