On 10 January 2018, the State Party submitted a report on the state of conservation, which is available at http://whc.unesco.org/en/list/632/documents/. Progress with the implementation of the Committee's recommendations is reported as follows:

In line with Decision 41 COM 7B.49, a joint World Heritage Centre/ICOMOS Reactive Monitoring mission was carried out from 23 to 27 April 2018.

At the time of drafting this report, the joint World Heritage/ICOMOS Reactive Monitoring mission has been carried out but its report has not yet been finalized. Its results will be examined by the Committee at its 43rd session, as per Decision 41 COM 7B.49. However, the report will be available at http://whc.unesco.org/en/list/632/documents/ prior to the 42nd session.

The Terms of Reference for the mission agreed with the State Party included review of the scope of the development that is being considered for the property over the next decade, especially in relation to the provision of upgraded housing and sewage system, education, health and tourism facilities and other specific needs of the Monastic community and local residents; the emerging Conservation and Master Plans; the current management structures; progress with the conservation of the monastic irrigation system; and revised plans for the Museum Complex.

In advance of the finalization of mission report, it can be reported that the mission experts were informed of the creation of a Fund for the Conservation and Development of the Solovetsky Archipelago chaired by the Director of the Russian Institute for Strategic Studies. It can also be reported that further to a meeting held between the State Party, the World Heritage Centre and ICOMOS on 20 October 2017 and the technical review by ICOMOS (dated 25 October 2017), the mission supported the revised architectural plans for the Museum building, which include removing more of the partly built museum and re-shaping what remains as a mainly grass-covered below-ground building. However, further comments on plans for the wider overall Museum Complex programme that involves the re-use of existing buildings will be provided in the 2018 mission report. 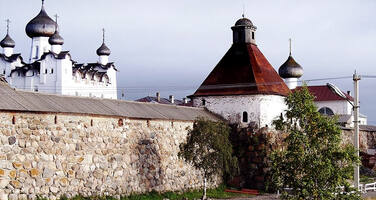