On 1 February 2018, the State Party of Slovakia submitted a report on the state of conservation of the property available at http://whc.unesco.org/en/list/1133, providing the following information:

On 27 February and on 3 April 2018, the World Heritage Centre transmitted to the State Party of Slovakia third-party information regarding logging activities since inscription, including inside the buffer zone and parts of the property, as documented through satellite images. No response was received at the time of writing of this report. The State Party of Slovakia noted its intention to invite the World Heritage Centre and IUCN to the property to discuss the proposed boundary modification.

The two resolutions adopted by the State Party of Slovakia aimed at addressing requests and recommendations expressed by the Committee should be welcomed.

The confirmation that logging continues to be suspended within the Slovak components of the property is noted. However, satellite imagery received from third parties shows that since the property’s inscription there has been substantial logging inside the buffer zone and even in parts of the property, potentially affecting its integrity and its Outstanding Universal Value (OUV).  It is also of concern that in parts of the components, protection from logging is still only guaranteed by a voluntary commitment of forest owners. It needs to be recalled that, as the result of the absence of a legal protection status of its components, the property continues not to meet the requirements of the Operational Guidelines, putting its OUV at significant risk.

Additional measures proposed by the State Party of Slovakia to provide legal protection of these areas, which currently do not benefit from a non-intervention regime, including through designation of new nature reserves, are therefore of utmost urgency and should be expedited, while ensuring consultations with stakeholders concerned.

The efforts undertaken by the State Party of Slovakia to elaborate a proposal for boundary modifications for the Slovak components of the property are noted. Consultations with the World Heritage Centre and IUCN, as well as a wide range of relevant stakeholders are welcome and should be continued. However, it is important to stress that any proposed boundary modification should have the objective of a better protection of the OUV of the property.  It is recommended that the Committee request the State Party of Slovakia to carefully design the adjusted boundaries and finalize the proposal as a matter of priority in consultation with the other States Parties of this transnational property, and with the World Heritage Centre and IUCN. The boundary modification proposal should demonstrate that it includes all important areas for the expression of the OUV of the property, that all areas within the property are provided a sufficient legal protection regime, that consultations have been held with relevant stakeholders, and that buffer zones are adequate in size and are subject to a management regime which ensures the protection of the property’s OUV. Given its potential impact on the OUV of the property, the boundary modification will have to be considered as a significant one, in line with Paragraph 165 of the Operational Guidelines.

The planned preparation of an IMP for the Slovak components of the property by August 2019 is noted. It is recommended that the Committee request the State Party of Slovakia to ensure that this process is fully in line with the development of the significant boundary modification proposal at all stages and the final proposal outlines the relevant management provisions.

The information provided by the State Party of Romania that logging in the buffer zone of some of its components is legal and in line with the provisions of the Management Plan for the respective national park is noted. However, it should be recalled that in its Decision 41 COM 8B.7, the Committee requested all States Parties of this property to give special emphasis to appropriate buffer zone management, in order to support undisturbed natural processes, including ongoing monitoring of threats and risks. Therefore, it is recommended that the Committee reiterate this request to the States Parties of Romania and Slovakia and request it to ensure that no logging operations are allowed in the buffer zones of the property, if they can have negative impacts on its OUV.

It is further recalled that, in its Decision 41 COM 8B.7, the Committee requested all States Parties of the property to strengthen the protection level within buffer zones and to improve the ecological connectivity between component parts, and to ensure that committed funding arrangements are able to safeguard consistent site management at the component level as well as coordinated management across the property. It is therefore recommended that the Committee request all States Parties to jointly report on the state of conservation of the property, including on transnational management of the serial property. 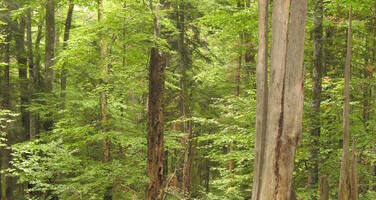