On 1 December 2016, the State Party of Slovakia submitted a report on the state of conservation of the property, which is available at https://whc.unesco.org/en/list/1133/documents/ and reports the following:

On 3 April 2017, the State Party of Slovakia provided additional information, as requested by the World Heritage Centre on 17 January 2017, specifying that the components Stužica-Bukovské vrchy and Vihorlat require significant boundary modifications while the components of Havešová and Rožok only need to be aligned to the boundaries of existing national nature reserves. Further negotiations with relevant stakeholders are expected to be completed by August 2017. The development of the Integrated Management Plan for all Slovak components is planned for 2019.

A nomination for a transnational serial extension to the property has been submitted by the States Parties of Albania, Austria, Belgium, Bulgaria, Croatia, Italy, Romania, Slovenia, Spain and Ukraine, which will be examined by the Committee under item 8B of the Agenda.

The progress made in implementing the recommendations of the 2014 Reactive Monitoring mission is welcomed and should be continued in line with the following considerations:

The State Party’s efforts to engage a broad range of stakeholders, including the World Heritage Centre, to explore how sustainable tourism could serve as an alternative source of income for local people and as a vehicle for sustainable development around the property as well as in the Central European region in general should be welcomed. The measures undertaken by the State Party of Slovakia to enhance the protection regime of the parts of the property, which to date have not been fully protected against logging, namely the creation of an “Ecological functional area”, should also be welcomed. This was achieved through a new Management Plan for the Poloniny National Park and includes forest stands of the Stužica – Bukovské vrchy component as well as the establishment of the new Borsukov vrch nature reserve, covering other parts of the same component. Nevertheless, even with these additional measures and despite the voluntary commitment of some entities not to carry out logging operations, only parts of the Slovak components of the property are currently legally protected against logging. The reported negotiations between different ministries and the creation of an interdepartmental coordination group based on the cooperation and collaboration agreement signed between the Ministry of Environment and the Ministry of Agriculture and Rural Development can serve as an important step in the process of the development of an IMP. However, the lack of substantial progress in this regard raises concerns. In the absence of an IMP and with only parts of the territory benefiting from a strengthened protection regime, the Slovak components of the property continue to be threatened by logging.

It is noted that the negotiations necessary for a proposal for boundary modifications, as requested by the Committee, are underway. The new delineation of the Slovak components should ensure that the most important areas for the expression of the OUV of the property are included and that all areas within the property benefit from a sufficient legal protection regime, with consent given to such regime by all relevant stakeholders through a participatory process. While the State Party of Slovakia reports that some potential boundary modification proposals have been considered and that more time is needed to discuss the possible options with all relevant stakeholders, it is recommended that the Committee urge the State Party of Slovakia to finalize and submit a proposal for a boundary modification of the Slovak components of the property as soon as possible.

Unless further urgent measures are taken to completely resolve the issue of the lack of an adequate protection regime of the Slovak components of the property and to ensure that their boundary delineation is adequate, the protection of these components from logging and other potential threats cannot be guaranteed in the long-term. Such a situation would clearly constitute a potential danger to the OUV of the serial transnational property as a whole, in line with Paragraphs 137 and 180 of the Operational Guidelines. 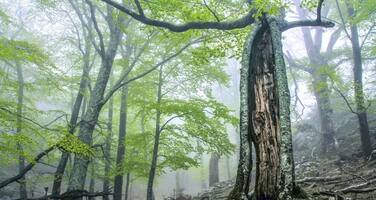