On 1 February 2017, the State Party provided to the World Heritage Centre the studies on mining in the setting of Chittorgarh Fort and information on the consolidation measures for the Kumbhalgarh Fort. On 30 November 2017, the State Party submitted a state of conservation report, which is available at http://whc.unesco.org/en/list/247/documents/ and provides information on the actions undertaken to implement the decisions adopted by the Committee at its 40th session, as follows:

In 2015, the Committee recalled that, at the time of inscription, it was noted that the Management Plan for the Jaisalmer Fort, along with sub-plans including visitor management, risk preparedness, and livelihood generation for the local population, would be completed by the end of 2013, and expressed concern that no concrete progress appeared to have been made.

It is noted that the Management Plan for Jaisalmer Fort has still not been provided to the World Heritage Centre for review by the Advisory Bodies. As pointed out in the report on Jaisalmer Fort, the issue of controlling unauthorized construction is being addressed in the Management Plan, which is currently under finalization, and legislative frameworks to control developments are being implemented. In view of several previous requests by the Committee for the completion of the Management Plan for Jaisalmer Fort, it is suggested that the Committee request the State Party to submit the completed Plan by 1 December 2018. The State Party should also provide an update on conservation work at Jaisalmer and more details on threats from unauthorized constructions and how these are being dealt with.

The documents submitted by the State Party on the impacts of mining relate to a period before 2012, when controls on mining were introduced to ensure that no mining or blasting can take place within 10 km of Chittorgarh Fort. In 2013, the Supreme Court relaxed these controls and permitted temporary mining with heavy machines within 10 km of Chittorgarh Fort – i.e. within 1 km of the property boundary – in order to analyze the impact on mining. The relaxed controls were only in force for four weeks. These measures were taken because a large mining company challenged the 2012 order by the Rajasthan High Court banning all mining and blasting activities within 10 km of the Chittorgarh Fort's wall. It is presumed that the survey results are still with the Supreme Court, as the State Party indicates that they are sub judice and cannot be provided.

It is therefore suggested that the Committee also request the State Party to provide further details of the legal challenge and, as the relaxation was only in place for a period of four weeks, to confirm that the 2012 ban on mining activities and blasting within 10 km of the Fort wall is still in force.

It is noted that the State Party has provided assurances that, after extensive consolidation works carried out in 2005 at Kumbhalgarh Fort, it is now in a good state of conservation. 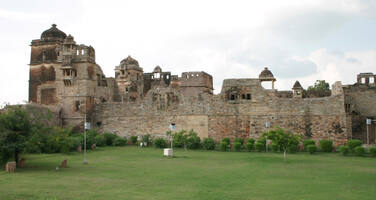