On 27 December 2017, the State Party submitted a report on the state of conservation of the property, which is available at http://whc.unesco.org/en/list/303/documents/ and provides the following information:

The elaboration and submission of a new Management Plan for the property is welcomed. It is currently being reviewed by IUCN who may provide comments and recommendations to the State Party as appropriate. It is noted that the new plan defines a buffer zone for Iguazú National Park, and it is recommended that the Committee encourage the State Party to develop and submit to the World Heritage Centre a proposal for a Minor Boundary Modification, in order to officially establish a buffer zone for the property as considered appropriate.

Increased cooperation with the neighbouring Iguaçu National Park in Brazil should be welcomed, in particular, the joint meeting in January 2017 in which a preliminary plan to address Projects of Common Interest was defined. It is recommended that the Committee request the States Parties of Argentina and Brazil to continue their efforts in strengthening transboundary cooperation with regards to the management of the two adjacent properties. It is also recommended that the Committee request the two States Parties to clarify whether additional actions are planned in order to further formalize transboundary cooperation, following the signing of a letter of intent between the Administración de Parques Nacionales de Argentina, Chico Mendes Institute for Biodiversity Conservation (ICMBio), the Iguazú National Park in Argentina and the Iguaçu National Park in Brazil in 2016, which was welcomed by the Committee in its Decisions 40 COM 7B.69 and 40 COM 7B.70.

The information provided by the State Party regarding the RN101 is noted, and the confirmation that no plans exist for paving or modifying the road that crosses the property should be welcomed. It should, however, be recalled that concerns have also previously been raised regarding future developments to the road, including beyond the property’s boundaries. The new Management Plan also notes an increase in traffic on the road due to the paving of sections outside the property as one of the threats to the property’s values due to increase in noise, risk of collision with wildlife and illegal extraction of flora and fauna. The plan further notes, as a potential threat, the existing political pressure to pave the entire RN101, including the stretch within the property. However, while it is stated that no plans currently exist for altering the road within the property, no detailed information is provided by the State Party regarding plans for the development of other road sections outside the property’s boundaries, and it is therefore recommended that the Committee request clarification as to whether any plans exist for extension or further paving of the road outside the property, which might potentially affect the Outstanding Universal Value (OUV). It is further noted that it is foreseen to develop, in consultation with the National Roads Department, a long-term Management Plan for the road since it crosses the property. It is recommended that the Committee request the State Party to ensure that conservation of the property’s OUV is fully taken into account in the development of the plan.

The construction of the Baixo Iguaçu hydropower dam is discussed in detail in the report on the state of conservation for Iguaçu National Park (Brazil) (see Document WHC/18/42.COM/7B, item 84), where it is recommended that the State Party of Brazil be requested by the Committee to ensure that an overall comprehensive monitoring system is in place, both for aquatic fauna and water flow, which would allow oversight of the implementation of requirements and action plans developed for the hydropower project, and assess their effectiveness with regards to mitigation of possible negative impacts on the OUV of both properties, and that cooperation with the State Party of Argentina is established to address these issues.  It is therefore recommended that the Committee also request the State Party of Argentina to cooperate with the State Party of Brazil on this matter. 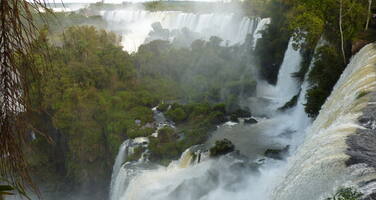