Programme for the Safeguarding of Venice: since 1966 more than 1,500 projects worth over 50 million euros (mainly conservation and restoration projects)

On 31 January 2017, the State Party submitted a report on the state of conservation of the property and the implementation of Decision 40 COM 7B.52, available at https://whc.unesco.org/en/list/394/documents/. Progress on a number of issues regarding conservation and the implementation of the 2015 Reactive Monitoring mission recommendations is presented in the report as follows:

While the 2015 Reactive Monitoring mission expressed its concern that the Historic Centre of Venice is losing its architectural and urban coherence, the State Party notes that the Veneto Region, the Prefecture of Venice, the City of Venice, the City of Venice Metropolitan Area, MiBACT, the State Museums of the Veneto and the Patriarchy of Venice have signed a Memorandum of Understanding to implement the “PSBC (Piano di Salvaguardia dei Beni Culturali) Cultural Heritage Preservation Plan”. The State Party also highlights that the current building regulations remain adequate and include measures to support owners of buildings in the historic centre.

On 3 May 2017, the State Party submitted additional information on the state of conservation of the property. This included details regarding the following:

The State Party confirms that all of the institutions involved are working collaboratively in an engaged manner to protect the Outstanding Universal Value (OUV) of the property, and that, having recognized the major risks to the property threatened both by material factors and by other intangible factors, it is committed to carrying out relevant measures, although details of what is planned have still to be provided.

The State Party is proposing to introduce new measures within the framework of the newly developed “Pact for the development of the City of Venice” for the elaboration of projects to allow large ships to reach the Venice Maritime station without passing through the San Marco basin and the Giudecca canal. To this end, the authorities are exploring a variety of options, including the use of existing port channels (Canale Vittorio Emanuele III) in order to avoid the excavation of new ones. However, a detailed timeframe and feasibility plan of the project, including the necessary Impact Assessments, has so far not been presented.

It is recommended that the Committee reiterate its request that the State Party submit, in conformity with Paragraph 172 of the Operational Guidelines, details of proposed developments, together with all relevant cumulative HIAs and Strategic Environmental Assessments (SEA) with a focus on the potential impact of projects on the OUV of the property.

The progress towards the completion of the MOSE defence system planned by the end of 2018 is also noted. It is recommended that the Committee request the State Party to provide detailed and updated information on this important project, including its management and maintenance systems.

The “Venice Blue Flag” voluntary agreement signed by over 40 shipping companies is a notable area of accomplishment that has been renewed every year since its inception in 2007. The agreement ensures that shipping companies restrict harmful emissions in the lagoon area and commit to the history of the city by sharing its values with passengers.

The announced drafting of a Climate Plan by the municipal authorities is welcomed. Venice is in a privileged position as actions taken at the property attract considerable attention and it might have the potential to influence the adoption of good management practices elsewhere. It is recommended that the Committee request that the authorities develop the proposed Climate Plan taking into account the “Policy Document on the Impacts of Climate Change on World Heritage properties.”

New details provided by the State Party on plans for HIAs and the sustainable tourism strategy for the property are also welcomed. They will be carried out using the relevant UNESCO policy tools, such as the Sustainable Tourism Programme and the “Policy for the Integration of a Sustainable Development Perspective in the World Heritage Convention.”

Although progress has been made with the implementation of some of the 2015 Reactive Monitoring mission recommendations, it is noted that a number of important recommendations have not yet been fully addressed, such as the need to ensure a long-term equilibrium for the Lagoon environment based on detailed assessments of its eco and cultural systems and the cumulative impact of various projects.

Therefore, it is recommended that the Committee reiterate its request that the State Party implement all recommendations put forward in its decision 40 COM 7B.52, including all immediate, short, medium and long-term measures and recommendations of the 2015 mission previously endorsed by the Committee.

It is further recommended that the Committee reiterate its request that the State Party update the Management Plan, in order to sustain in the long term the OUV of the property, and its landscape and seascape setting.

In this regard, it is furthermore recommended that the Committee request that the State Party submit to the World Heritage Centre a detailed road map for the way forward with measurable benchmarks and an Action Plan to deliver what is required to maintain and enhance the OUV of the property. 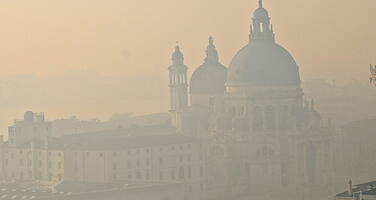