An IUCN Reactive Monitoring mission visited the property from 28 November to 3 December 2016. On 30 January 2017, the State Party submitted a report on the state of conservation of the property. Both reports are available at https://whc.unesco.org/en/list/1138/documents/. The State Party provides the following information:

The measures undertaken by the State Party to implement some of the recommendations of the 2014 joint World Heritage Centre/IUCN reactive monitoring mission and Decision 40 COM 7B.76, particularly progress made on removing feral livestock from Coiba Island and introducing amendments to ensure that legislation continues to be in place prohibiting development (apart from low-impact infrastructure for ecotourism and scientific research) within the property, should be welcomed. In this regard, the conclusion of the 2016 mission that the terrestrial component of the property appears to be well preserved is noted. The mission further noted that the development of infrastructure outside of the property (namely on the mainland opposite it) that could impact its Outstanding Universal Value (OUV) did not appear to constitute a threat at the moment due to remoteness of the areas and low potential economic interest, but would require further monitoring to ensure that it does not become an issue in the future. On the other hand, the PUP currently being elaborated for the property and aimed at identifying and regulating its carrying capacity urgently needs to be finalized. In particular, biosecurity measures, including strengthening capacity of staff, will need to be developed in accordance with the PUP and will need to be put into place to deal with both tourists as well as the threat of accidental introductions of invasive species by Park, naval and police personnel.

While progress on operationalizing the Coiba Fund is encouraging, it is noted that it would only be implemented by mid-2017, even though the State Party had previously indicated 2016 as the deadline for the full operationalization of the Fund.

The main threat to the OUV of the property remains fisheries management, both in the Coiba National Park and in its SZMP. While the State Party considers that the state of conservation of the property is good, the absence of comprehensive monitoring data makes it difficult to draw concrete conclusions. However, the mission noted information from NGOs and tourist operators that there have been declines in key marine values due to unsustainable fishing, as well as the conclusions of a recent study (Vega et al. (2016)) of artisanal fishing within the property that certain fisheries were unsustainable and that some of the property’s marine resources were at risk.

Draft regulations for managing the SZMP presented in the State Party report include certain aspects, such as allowing spear-fishing and industrial tuna fishing, which are incompatible with the World Heritage status of the property, particularly industrial fishing. Recalling the concerns repeatedly expressed by the Committee over the absence of effective fisheries regulations within the property, it is recommended that the Committee urge the State Party to take immediate measures to ensure that fishing is strictly controlled and that fisheries permitted within the property are sustainable. This should include measures to improve the enforcement of regulations within Coiba National Park and revision of the proposed regulations for the SZMP to ensure that no fishing is permitted within its territory which would be incompatible with the World Heritage status of the property, particularly industrial fishing. In case fish stocks do not show a recovering trend, consideration should be given to a temporary moratorium on all fishing within the property, in line with the mission’s recommendations. It is recommended that the Committee request the State Party to address the issues related to the management of the marine component of the property, and particularly fisheries regulations, as a matter of priority, in order to demonstrate substantial progress in resolving these issues by 1 February 2018. 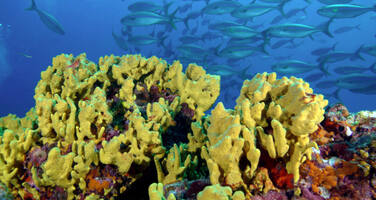