State of Conservation Ancient Thebes with its ... 2017
Print

Ancient Thebes with its Necropolis

The State Party submitted a report on the state of conservation of the property in February 2017, available at https://whc.unesco.org/en/list/87/documents/, providing information on conservation works, progress in implementing the recommendations of the Committee, and proposed projects.

The Ministry of Antiquities is coordinating with the stakeholders to complete the Management Plan, for the property by the end of 2017.

Physical conservation works, including masonry repair and cleaning of inscriptions, have occurred at the Karnak, Luxor and Madamud temples, and the Avenue of the Sphinx. Archaeological excavations and research projects by international missions have been carried out at the Temple of Ptah and Karnak. On the West Bank, the lighting project has been completed and the tombs of Nefertari and Seti I, three tombs in Deir El-Madina and three Tombs of the Nobles have been opened for visits. Further conservation, management and visitor service works are proposed at Karnak and Luxor, as well as completion of works at the Avenue of the Sphinx and construction of a visitor centre and museum.

There are many other conservation and management issues facing the property, including encroachments, invasive grass and animals, deterioration of floor tiles, groundwater and sanitation problems.

As requested by Decision 39 COM 7B.49, the State Party invited a joint World Heritage Centre/ICOMOS Reactive Monitoring mission, which occurred in April 2017. The mission noted that some actions recommended by previous missions have been actioned, but expressed great concern about the substantial and cumulative adverse impact of major projects on the Outstanding Universal Value (OUV) of the property. The mission also observed specific conservation issues including:

The 2017 mission noted that some actions recommended by previous Committee decisions have been taken; these include the restriction of access to the property by tour buses and works in front of the temple of Deir el Bahri, the Valley of the Kings and the Valley of the Queens along with various conservation works. However, a number of high-priority decisions have not been implemented or planned. These include an integrated Management Plan and tourism control strategy, the revision of the 2030 Masterplan to integrate conservation of OUV across all projects, the submission of full information about all projects in accordance with Paragraph 172 of the Operational Guidelines, as well as the riverbank’s landscaping, traffic control, visual impact and draining problems of its retaining wall, and its connection with the Karnak temple and plaza.

The mission expressed great concern about the substantial and cumulative adverse impact on the OUV of new projects implemented within the property and its buffer zone, the threats on the authenticity and integrity of the property including natural decay and structural problems, the absence of effective and comprehensive management arrangements at national and local levels, the lack of a conservation plan for the property, and the poor human and technical resources mobilized. The mission also noted that the management of the property is affected by over-emphasis on tourism development, which has resulted in major projects such as the imposing concrete seating structure in front of the sacred lake of the Karnak Temple complex, and the works to the Avenue of the Sphinx. The mission concluded that an integrated management plan that focuses on conservation and protection, should guide the State Party’s actions within the property and its buffer zone, while initiatives related to social and economic development of local inhabitants should not adversely affect the property’s OUV, as per the World Heritage Sustainable Development Policy.

Moreover, the mission noted the focus on ancient archaeology has led to neglect or destruction of features from later periods to expose Pharaonic remains (such as along the Avenue of Sphinx and in New Gourna) or to imposing landscaping projects (as occurred at the plaza at the main entrance of the temple at Karnak); it also regretted that it could not inspect important parts of the property, including the Tomb of Seti and the shrine of Hatshepsut, all the closed tombs in the Valley of the Kings and Valley of the Queens, the New Gourna site of the Noble Tombs and has not been provided with relevant documentation.

The Management Plan for the property, including a revised Statement of OUV are needed urgently; it should include a conservation plan setting out priorities and needs of different components of the property in terms of preservation, maintenance and restoration, and ensuring harmonized approaches and techniques to that effect. The authorities involved in managing the property need to ensure effective management, strengthen co-ordination, allocate adequate human resources and build capacity. The proposal by the UNESCO Office in Cairo to establish a series of capacity-building workshops dedicated to elaborating the Management Plan for the responsible Thebes Antiquities staff, is an encouraging perspective but cannot cover the needs.

The State Party should be reminded of the need to comply with Paragraph 172 of the Operational Guidelines, and be requested to provide documents that were not available to the 2017 mission; these include processes followed in the conservation of the Noble tombs TT.112 and TT.131 and the basis on which methods of intervention were decided, the project of the lighting and security cameras, the underground water project design and implementation, and flood channeling and the Flood Emergency Plan established for the Valley of the Kings and the Valley of the Queens. 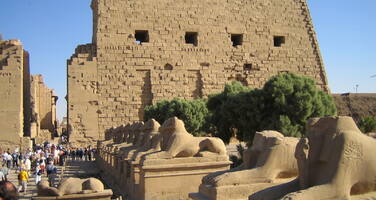