On 30 November 2016, the State Party submitted a state of conservation report, which is available at https://whc.unesco.org/en/list/129/. Subsequently additional information was provided in March 2017, which includes maps of the property, a proposal for the buffer zone and the no-fly zone around the site, as well as the planning for revision of the Management Plan. Progress in conservation measures is reported as follows:

It is noted with satisfaction that the State Party responded positively to the recommendations of the Committee and ICOMOS regarding the management of the property.

Following the opening of the Rio Amarillo airport, the establishment of a no-fly zone is an important measure to reduce impact of flights at the property. Mitigation and rescue interventions around the airport have been completed. The opening of the airport did not cause a significant increase in visitor numbers that remain relatively low.

However, regarding the proposal for a buffer zone, as requested by the Committee in its previous decisions, the map included in the most recent report, and resubmitted in March 2017, differs from the map included in the 2015 state of conservation report provided by the State Party. This implies a reduction of the proposal for the buffer zone. It is recommended that the Committee urge the State Party to clarify this matter and submit a Minor Boundary Modification, according to paragraphs 163-165 of the Operational Guidelines.

Progress can be noted in the management approach that now explicitly includes the local communities and authorities. A financing strategy, tourism management, interpretation for young people and disaster preparedness are among the issues that are being addressed. These matters will need to be incorporated in the 2014-2020 Management Plan, as per ICOMOS recommendations issued in 2015.

Finally, it is noted that the use of technology in the conservation programmes is of high standards. This is being applied for the documentation of stone sculptures (3D scanning of reliefs), mapping of the tunnel systems (robot topographic survey and 3D modeling) and the creation of a conservation laboratory. The protective structures for the hieroglyphic stairway are continuously tested and monitored. This will lead to decision making by the end of 2018 and the construction of the structure in 2019.

Clarifications of Property Boundaries and Areas by States Parties 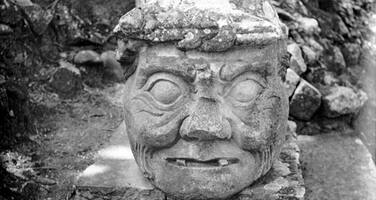