Total amount granted: 300 000€ from the European Union, through the Central African World Heritage Forests Initiative (CAWHFI) project, from 2016 to 2018

On 13 January 2017, the State Party submitted a report on the state of conservation of the property, which is available at https://whc.unesco.org/en/list/1147/documents/ and provides the following information:

The State Party's decision to deviate the proposed Lastourville / Mikouyi Road to the north of the property should be welcomed. It is noted that the State Party is awaiting the results of the ESIA for the road project, without specifying whether it will take account of the historic complexes. It is therefore recommended that the Committee reiterate its request to the State Party to ensure that the ESIA includes a Heritage Impact Assessment (HIA) in accordance with the ICOMOS Guidance on HIAs for Cultural World Heritage Properties. This HIA should include a specific section that focuses on the potential impact of the project on the Outstanding Universal Value (OUV) of the historic complexes of the property in accordance with Decision 39 COM 7B.32.

As regards the optical fibre, it is noted that the installation work was carried out under the control of the ANPN. No negative impacts are mentioned in the report since the fibre was laid along the existing railway line.

The reactive monitoring mission of January 2015 identified a series of conservation measures for archaeological sites. Since 2016, and in the framework of the CAWHFI project, the World Heritage Centre is providing 300,000 Euros in support of the ANPN over a period of three years. This funding enabled the recruitment of an agent in charge of cultural heritage. Throughout the project, support will also help to draw up a plan for the development of the historical complexes and to carry out numerous activities for their delimitation and valorization (geo-referencing, sign posting, etc.). International assistance for conservation from the World Heritage Fund was approved in May 2016 and also enabled training on the management of the cultural aspects of the property.

As concerns the surveillance of the property, the mission noted that the lack of personnel did not allow for adequate surveillance and reaction to the threat of poaching. The information that the ANPN will recruit 40 guards over the period 2017/2018 with the support of the European Union is therefore welcomed. This workforce will contribute to the increase in the number of patrols and the strengthening of the management of the property. The adoption by the ANPN of the IMET management tool (Integrated Management Effectiveness) should be welcomed by the Committee as this methodology will make it possible to assess the effectiveness of the management of the property and to meet the conservation objectives. The management plan for the property has been updated and validated. It is noted that pressures on the property, such as poaching, remain relatively low and that the ANPN stresses the resolution of the "human-wildlife" conflict. Electric fencing around agricultural fields can help protect crops in order to improve the lives of local communities. However, it is recommended that the Committee request the State Party to monitor closely the impacts of these fences on the OUV of the property to ensure that they do not constitute a barrier to wildlife movement and ecological connectivity between the property and the surrounding forests. In addition, the ANPN will, with EU funding, strengthen the involvement of the Local Management Advisory Committee (LMAC) in the management of the property, which should also address the "human-wildlife" conflict. 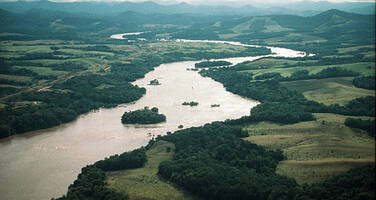