Threats identified at the time of extension of the property in 2014:

On 6 December 2016, the State Party submitted a report on the state of conservation of the property, which is available at https://whc.unesco.org/en/list/1248/documents and responds to Committee Decision 38 COM 8B.9, as follows:

The State Party notes that a high-speed railway project linking Guiyang to Nanning (GN Railway) is planned, which will cross the buffer zone of Libo Karst.

The State Party refers to a revision of the boundaries of Wulong Karst. However, no request for a boundary modification was submitted in the appropriate format, as laid out in Paragraph 164 of the Operational Guidelines. On 23 January 2017, the World Heritage Centre requested the State Party to submit the proposal in the required format for review by IUCN.

The progress achieved by the State Party in implementing an integrated management system for the serial property as a whole should be welcomed. The CMP-SCK covers the period 2016-2025, and complements the individual management plans of each component of the property by providing an overarching management plan that has the property’s OUV at its core. It identifies threats at each component, including threats to biological values, which are not part of the OUV. It includes specific targets and management measures for water, solid waste, air pollution, light pollution, and noise control, as well as separate chapters on tourism, local communities, education, scientific research, and monitoring. The adoption of the CMP-SCK and the establishment of the PACC are significant steps to ensure an integrated approach to planning, governance and management of the serial property.

Impacts from tourism, agriculture, water pollution and urban development continue to be closely monitored by the State Party, and measures have been taken at individual sites to address these. The implementation of the CMP-SCK should enable further progress to be made in this regard. The effectiveness of these measures should be closely monitored by the State Party, to ensure that they are achieving the desired results. Particular care should be taken to ensure that the promotion of tourism as an alternative livelihood to agriculture does not exacerbate the current impacts and threats from tourism development and high levels of visitation.

The two planned tourist roads that would cross the property at Shilin Karst are a significant concern. While no further information on these projects has been provided, the State Party has noted that they are likely to have a negative impact on OUV. It is therefore recommended that the Committee urge the State Party not to proceed with these projects.

The planned Guiyang-Nanning high-speed railway (GN Railway) that would cross the buffer zone of Libo Karst (in between the two separate components of Libo Karst) is potentially of concern. Annex 2 of the State Party’s report discusses the alternative alignments that were considered and clarifies why these were abandoned, and goes on to state that the project is unlikely to have any impact on the OUV of the property. However, a full Environmental Impact Assessment (EIA) for the project has not been submitted. It is therefore also recommended that the Committee request the State Party to submit an EIA, with a specific section focusing on the potential impact of the project on the OUV, for the GN Railway project to the World Heritage Centre, for review by IUCN, before making any decisions that would be difficult to reverse, in accordance with Paragraph 172 of the Operational Guidelines.

The relocation of Wukeshu Village outside the property is noted, as is the support reported to have been provided to the affected people. It is recommended that the Committee also request the State Party to provide detailed information on the processes that were followed, in particular to ensure that the relocation has been carried out with the consent of the population concerned. 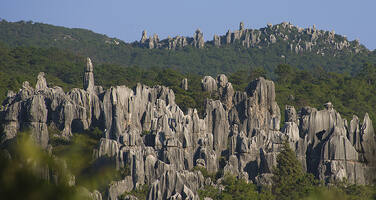