On 15 January 2016, the World Heritage Centre transmitted a letter to the State Party raising concern that two recent scientific papers reported an 87% chick mortality rate of Atlantic petrel and a breeding success rate of less than 10% of Tristan albatross on Gough Island, due to predation by invasive house mice.

On 18 April 2016, the State Party submitted a state of conservation report, which is available at https://whc.unesco.org/en/list/740/documents/, and provides the following information:

The State Party also reports that the eradication programme for the invasive plant Sagina procumbens has been almost continuously implemented since 2009. A review of the programme in 2014 led to a proposal for the RSPB to lead a further five-year eradication campaign.

The rate of decline in seabird populations on Gough Island, primarily as a result of predation by invasive mice, is noted with significant concern. The critically endangered Tristan albatross (Diomedea dabbenena) in particular appears to have experienced a major decline in breeding success rate predominately due to low fledgling survival rate. Other affected species include the critically endangered Gough finch (Rowettia goughensis) and the endemic Atlantic petrel (Pterodroma incerta). The scientific reports note that the smaller petrel species are particularly vulnerable to extinction from the island in the near future if mice are not eradicated, and urgent actions are therefore required to reverse this declining trend in bird populations.

Whilst noting that allocation of three-quarters of the eradication programme budget is anticipated through RSPB’s fundraising campaign, it is of concern that the remaining funding source has not yet been confirmed. Considering the urgent need to address the threat, which is directly impacting the property’s Outstanding Universal Value (OUV), and recalling Decision 33 COM 7B.32 adopted at the 33rd session (Seville, 2009), which requested the State Party to eradicate mice within five years, it is recommended that the Committee request the State Party to urgently allocate sufficient funds for the rapid implementation of the eradication programme.

Also recalling decision 33 COM 7B.32 in which the State Party was requested to ensure continuous programmes of eradication of procumbent pearlwort (Sagina procumbens) for at least the next three years, it is appreciated that the programme has been almost continuously implemented since 2009, led by the Tristan da Cunha government and RSPB, through John Ellerman Foundation funding. It is recommended that the Committee request the State Party to submit an update on the current status of the procumbent pearlwort on the island, as well as further details on the further five-year eradication campaign. 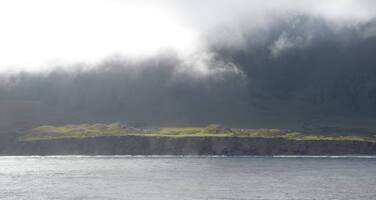