Threats identified during the 2nd cycle of Periodic reporting in 2013:

On 19 August 2014, 4 February 2015 and 25 June 2015, the World Heritage Centre sent letters to the State Party to request further information about media reports of proposed residential and commercial development at the town of Tusayan in the vicinity of the property, a proposed tramway descending into the heart of the canyon (the Grand Canyon Escalade project), and the continuation of uranium mining operations for the Canyon Mine project near the South Rim of the Grand Canyon based on a 1986 Environmental Impact Statement (EIS).

The State Party responded to these letters on 3 November 2014, 21 April 2015, and 6 October 2015, respectively, providing the following information:

Following further concerns about the possibility for up to 11 uranium mining proposals to proceed under the terms of the withdrawal communicated to the State Party by the World Heritage Centre on 28 January and 31 March 2016, the State Party submitted additional information on 21 April 2016, including a map indicating the locations of all above-mentioned existing and proposed developments.

It is recommended that the Committee welcome the 20-year uranium mining withdrawal put in place for areas surrounding the property in order to undertake scientific studies to identify the environmental impacts of mining on the Grand Canyon watershed, which will be used to inform future mining activities. However, it is noted that the withdrawal does not encompass all lands around the property, and one uranium lease application to the south of the property is located on land that is not included in the withdrawal. Furthermore, the exemptions from the withdrawal given to 11 uranium mining proposals are of significant concern. Whilst recognizing that these proposals have valid existing rights under federal law, such mining activities have the potential for significant direct and cumulative impacts on the property, and before any mining operations are permitted, Environmental Impact Assessments (EIA) should be completed in line with IUCN’s World Heritage Advice Note on Environmental Assessment. Noting that riparian ecosystems are specifically mentioned in the property’s Statement of Outstanding Universal Value (OUV), potential downstream impacts into the property should be considered. It should be noted in particular that the EIA for the Canyon Mine project, which was temporarily closed in 2013, dates back to 1986. It is therefore crucial that a new EIA, including an assessment of the potential impact on the OUV, is conducted before operation of this project is permitted to resume.

It is further noted that in April 2015, the Grand Canyon Escalade project had not yet progressed enough to initiate the review process. Given its proposed location (partly) inside the property, and the nature of proposed facilities, including a restaurant and river boardwalk at the bottom of the canyon, it is recommended that the Committee express its concern about the potential impacts of this project, and that it request the State Party to provide an update on the current status of the proposal and its review process.

By letter to the Department of Agriculture of 11 May 2015, the Department of Interior urged the United States Forest Service to consider in its environmental analysis of the Tusayan proposed residential and commercial development, impacts on the OUV of the property. On 4 March 2016, the Forest Service of the United States Department of Agriculture published a news release noting its decision to not authorize the project. It is recommended that the Committee welcome this result. 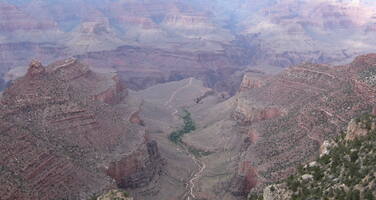