In January 2016, the State Party submitted a state of conservation report, a summary of which is available at https://whc.unesco.org/en/list/1377/documents/. Progress on a number of conservation issues addressed by the Committee at its previous sessions is presented in this report, as follows:

The State Party has achieved progress in addressing a number of the Committee’s concerns, despite facing substantial challenges as a result of regional political instability, economic difficulties and social changes.

Notable progress includes completing the Memorandum of Understanding between ASEZA and the DoA with the aim of enhancing the management of the cultural components of the property; and launching a programme to revise the draft 2014 Management Plan. Less progress has been made on the management of waste water of Rum village, which is noted to be a top priority for ASEZA’s investment plan for 2016. The State Party’s intention to keep the World Heritage Centre informed about the development of a waste water treatment plant, in order to comply to the greatest degree with guidelines and standards, should be welcomed.

Likewise, little progress is reported on implementing Environmental and Heritage Impact Assessments (EIA and HIA, respectively) for tourism activities in and around the property. However, it is foreseen that the EIAs and HIAs will be completed in 2016, for which advice will be sought from the World Heritage Centre and the Advisory Bodies regarding the application of IUCN’s and ICOMOS’ respective guidance documents on impact assessments.

Concerning illegal tourist camps and other camp-like installations within the property, the State Party considers that this issue does not represent a major threat to the property’s Outstanding Universal Value (OUV), integrity or authenticity. It has nevertheless taken legal steps against the camps and has initiated a negotiation process with the violators in an attempt to reach a peaceful solution for the illegal activities and to explore possibilities for a mutually acceptable compromise. The State Party has not commented on whether strategies exist or are foreseen for the rehabilitation of any degraded areas.

The highest priority in the revised Management Plan should be placed on the inclusion of legal measures and policies, backed by the necessary staff and financial resources, to enable effective management of the property and its buffer zone, and the regulation of development activities, visitor management, and tourism infrastructure and facilities, including vehicle route control within the property.

The State Party has not commented specifically on the engagement of national and international research institutions in the management system for the property. It is therefore recommended that the Committee strongly encourage the State Party to harness the work achieved by such institutions for achieving the highest possible levels of science- and evidence-based decision-making in the ongoing management of the property and its buffer zone. 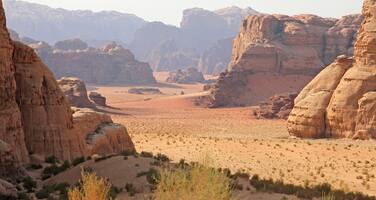