Threats identified at the time of the extension/re-nomination of the property in 2014:

On 7 March 2016, the State Party submitted a report on the progress achieved in responding to the recommendations made by the World Heritage Committee at its 38th session (Doha, 2014). The report is available at https://whc.unesco.org/en/list/1061/documents.

The report informs that steps were undertaken to reinforce collaboration between the National Institute for Anthropology and History (INAH) and the National Commission for Natural Protected Areas (CONANP), that the General principles of collaboration between INAH and CONANP are under legal revision and that the two organisations have started preparing a joint Work Plan for the property.

A World Heritage Technical Sub-Council is being set up within the Advisory Council for the Calakmul Biosphere Reserve, to ensure coordination between activities carried out in the Reserve and in the mixed World Heritage property.

With the support of the German Technical Cooperation (GIZ), the City of Calakmul has initiated a Development Wide Vision Programme for the Municipality of Calakmul 2013-2040 (PDGV) aiming to establish a balanced development programme that meets the needs of local populations, considers the potential of natural and cultural heritage and communities’ capacities. GIZ also assists CONANP by implementing the Protection and Sustainable Use of the Maya Forest Regional Programme (Mexico).

Reinforcement of the protection of the extended World Heritage property is underway, and the draft Previous Study Justification (EPJ) was prepared by December 2015: it envisages modifications to the decree establishing the Calakmul Biosphere Reserve so as to align the zoning of the Biosphere Reserve to the new reality of the extended World Heritage property, in line with the provisions under the General Law of Ecological Balance and Environmental Protection (LGEEPA).

In 2015, activities were carried out by INAH and CONANP to develop an integrated Management Plan for the mixed property: attributes of Outstanding Universal Value (OUV) and related threats have been identified and the preliminary structure of the Management Plan has been conceived and submitted. The accompanying timeframe envisages its completion and approval by the end of 2016.

To strengthen protection of archaeological heritage, on 30 March 2016, upon the State Party’s request, UNESCO inscribed in the International Register of Cultural Properties under Special Protection, according to Article 5 of the Second Protocol of the Hague Convention (1954), nine Mexican archaeological sites inscribed on the World Heritage List, including Calakmul.

The actions undertaken by the State Party demonstrate its commitment in achieving the effective protection and management of the mixed property, while taking into consideration the needs of local communities.

The completion of the updating of legal protection and associated zoning for the extended mixed property, including of the archaeological sites within the approved extension, is essential and urgent in that it will also form a solid basis to ensure favourable conditions for effective management. While the ongoing process should be welcomed, it is noted that the report submitted by the State Party does not provide the exact details of the proposed new zoning. It is therefore recommended that the World Heritage Committee request the State Party to submit to the World Heritage Centre, for review by the Advisory Bodies, the draft EPJ which contains the proposed new zoning of the Calakmul Biopshere Reserve, including maps. It should also be recalled that the Committee requested that the State Party consider in the future a revision of the boundaries of the property to include additional identified cultural sites in its vicinity that relate to Calakmul. Such a consideration of any potential future boundary revisions should be linked to the ongoing process of rezoning of the Calakmul Biosphere Reserve in order to ensure a consistent and integrated approach to protection and management of this mixed property.

The formal establishment of principles for collaboration between CONANP and INAH and their cooperation in developing a joint Work Plan should be welcomed and continued. Particularly important is the establishment of a Technical Sub-Council within the Advisory Council of the Calakmul Biosphere Reserve, which may guarantee coordination and consonance in the management approach and activities of the two responsible authorities, CONANP and INAH, and strengthen the integration of the World Heritage property in a wider management context. The ongoing preparation by CONANP and INAH of an integrated Management Plan for the mixed property, which includes consideration of both its cultural and natural values, represents an important undertaking on the State Party’s part and needs to be completed expeditiously. The preparation of this Management Plan also offers opportunities to conceive and set out monitoring indicators for the full set of attributes of the property. It is therefore recommended that the Committee request the State Party to ensure that the integrated Management Plan is finalized as a matter of priority and to submit its final draft to the World Heritage Centre for review by the Advisory Bodies, as soon as it becomes available.

The Development Wide Vision Programme for the Municipality of Calakmul 2013-2040 appears to be a crucial strategic document that could set favourable conditions for sustainable development opportunities. It is important that further information is provided on this document, including the plans and actions envisaged therein. For it to robustly ensure the protection, management and promotion of the values of the property and, at the same time, favour socio-economic development and benefits for the local communities, it should acknowledge the natural and cultural values of the property and its setting and build opportunities for socio-economic improvement upon them. The State Party should be encouraged to refer to the Policy for the Integration of a Sustainable Development Perspective into the Processes of the World Heritage Convention, adopted at the 20th session of the General Assembly (UNESCO, 2015), to inform the further development of this key strategic document. 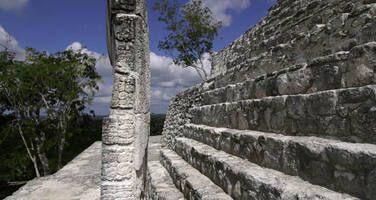