On 10 December 2015, the State Party submitted a state of conservation report (available at https://whc.unesco.org/en/list/429/documents), which addresses progress made in the implementation of World Heritage Committee Decision 38 COM 7B.37, adopted at its 38th session (Doha, 2014) regarding the potential adverse impacts of the Hyndford Quarry extension and Pleasance Housing projects on the Outstanding Universal Value (OUV) of the property and its buffer zone.

The State Party responded that on the Hyndford Quarry, following a Public Inquiry, the proposed extension of the quarry within the buffer zone of the property was referred to Scottish Ministers and has been turned down. Furthermore, the World Heritage Centre and the Advisory Bodies note that following the negative outcome of the Inquiry, the CEMEX company, which had submitted the application, announced a new commitment related to all World Heritage sites. This commitment specifically mentions this property in addition to its general commitment to World Heritage, which states that “CEMEX unequivocally recognizes that World Heritage sites are no go areas for extractive activities, and nothing in either the sites or their Buffer Zones must interfere with their Outstanding Universal Value (OUV) nor impinge in any way on their setting), notes specifically that “Regarding the New Lanark World Heritage site, CEMEX acknowledges the recent decision of Scottish Ministers and is committed to working together with the Ministers, the local authority, relevant NGOs and other interested parties to ensure the ongoing best interests of the World Heritage site, its OUV and setting.” The stopping of the Hyndford Quarry development in the buffer zone and the unequivocal above-mentioned new commitment given by the developer are to be welcomed.

Regarding the Pleasance Housing development, the State Party responded that approval in principle was given for this development in 2012. Although the local council has stipulated that detailed plans will be scrutinized by Historic Environment Scotland, these may not come forward as formal planning applications. If they do, a Heritage Impact Assessment (HIA) will be carried out before final approval is given, in which event the State Party will submit the HIA to the World Heritage Centre, for review by the Advisory Bodies.

The State Party further noted that funding recently awarded to New Lanark Trust will go towards restoration works within the property that address key conservation issues identified in the management plan.

The setting of the property is however still vulnerable as the Pleasance Housing development has been given approval in principle on a landscape site visible from the property without a detailed HIA being undertaken. It is noted that HIAs will not necessarily be required for the detailed plans for this development, unless they are submitted for full planning.

The outcome of these two developments suggests that the setting of the property needs to be more adequately defined, particularly in relation to how it supports the OUV of the property, so that HIAs are undertaken well in advance of development projects in the setting being considered for approval. 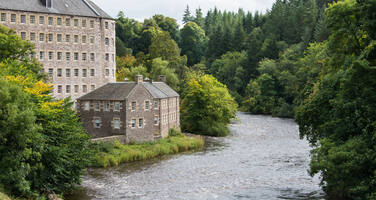