In its report, the State Party has highlighted its commitment to manage the mountain and its buffer zone, as one landscape unit, as recommend at the time of inscription. The Management Plan has been revised to clarify the roles and responsibilities of the multiple stakeholders and to create a platform of integrated governance to avoid possible conflicts between users and consumers of the heritage.

To build a research database, the State Party, through Le Morne Heritage Trust Fund (LMHTF) and the University of Mauritius, has carried out research on maroon archaeology and history. To sustain the rich biodiversity of the mountain, a Memorandum of Understanding is being prepared between the Ministry of Agro-Industry and LMHTF for joint biodiversity conservation works, to be implemented as soon as access to the plateau is in place.

Since inscription, there have been an increasing number of proposals for development projects mostly within the buffer zone, and in response relevant legal frameworks have been put in place for enforcement, control and monitoring of projects within the property, its buffer zone and the wider setting. All proposed developments are subject to Heritage Impact Assessments (HIAs).

The mission was requested to consider development pressures on the property and its buffer zone, particularly from the proposed large scale development by Le Morne Brabant IRS Co Ltd (LMB) within the property. The mission noted that, as a legal challenge by the developers is still currently being considered by the Courts, it was not provided with details of the proposed development and was also told that Le Morne Brabant IRS Co Ltd (LMB), who leases the land, may consider changing its development plans as the legal case proceeds.  Meanwhile, the developers have withheld access to their leased land, which in turn hinders access to the main route up Le Morne Mountain, and to the Makak archaeological site, which lies within the development area.

The observation by the mission that the inscription and preservation of Le Morne Cultural Landscape is regarded as a highly positive development in Mauritius in relation to the profile of the historical and cultural identity of the Creole community and its associations is to be welcomed.

In relation to the proposed development by Le Morne Brabant IRS Co Ltd (LMB), the findings of the mission are noted. There is still a lack of resolution over the legal challenges associated with this development, a situation that has persisted since the time of inscription. It was the understanding of the mission that the developers are apparently seeking some sort of financial compensation. The company asserts that, contrary to what was reported at the time of inscription (when it was said that the property was mainly State owned), it is now stated that the property contains land owned by private owners and companies as well as by the State. As few details of the legal dispute were provided to the mission, it is however not clear on what grounds the company considers itself to have been financially disadvantaged, nor how its disputes relate to whether or not the land in the property is all owned by the State. The issue of ownership is not, per se, an issue for the World Heritage Committee, rather it is the sole responsibility of the State Party, as stipulated in Paragraph 15 of the Operational Guidelines. The mission also noted that, in relation to the supposed limitation of their right to develop land-holdings, invoked by Le Morne Brabant following the inscription of the Le Morne Cultural Landscape, such limitations were in effect already in place before inscription by virtue of the fact that the property had been proclaimed a national memorial site and was strictly protected.

It is clearly important that the impasse between the State Party and the plaintiff is resolved in a definitive and harmonious manner. Although it is regrettable that the developer has withheld access to its leased property, with implications for conservation, property management, and the development of heritage activities at the property, while the legal dispute continues, the LMHTF must continue to manage and conserve the property to the fullest extent possible under the circumstances.

The research undertaken on collaboration with the University of Mauritius on Maroon archaeology is welcomed. Given the importance of the Makak site for the information it holds on the links between the Maroon communities and the mountain, the mission recommended that a request might be made to the developer to allow access for archaeological investigation in order to continue studies of the site. The mission also noted the desirability of the LMHTF to consider the possibility of eventually acquiring the Makak site as a possible visitor centre and point of entry to the property from the north.

The mission also noted a shortage of development land at Le Morne village, as highlighted in the Le Morne Local Economic Development Plan. This issue is not addressed by the Management Plan as the village is not located in the property or the buffer zone. Nevertheless, the community needs to be assisted in terms of settlement space (preferably within the buffer zone) and with basic infrastructure needs, in order to ensure that they are beneficiaries of the property as well as hotel-owners and the land owning class of Mauritians. 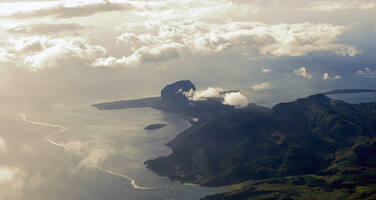