On 29 January 2016, the State Party of Egypt submitted a report on the state of conservation of the property, which is available at https://whc.unesco.org/en/list/90/documents/, providing the following information:

The report from the State Party indicates that despite the establishment of the permanent Committee for the Antiquities in Alexandria, and efforts by the Ministry of Antiquities, there has been no significant implementation of the corrective measures and actions to safeguard and conserve the OUV of the property due to the lack of financial resources.

The State Party has not provided information or updated the status of a number of matters previously raised by the World Heritage Committee, including:

The digital map of the property and its buffer zone submitted by the State Party has not been done in conformity with Annex 11 of the Operational Guidelines. The proposed shift in focus from monuments and significant buildings to a more-holistic approach that takes into consideration all the attributes of the property, which contribute to the preservation of its OUV is welcomed. However, in accordance with the corrective measures adopted by the Committee, this approach needs to be presented in the comprehensive Conservation and Management Plans.

The State Party report shows that the issue of the rising water table in the property has not yet been addressed. The saturation of the lower archaeological layers by water from the surrounding reclamation/irrigation project was the main reason the property was put in the Danger List in 2001 and tackling it remains a key corrective measure. The initial response was de-watering by means of pumps. The 2012 Reactive Monitoring mission acknowledged that the methodology of electrical pumping was unsustainable in the long term and proposed that the underlying causes needed to be addressed through a project to modify the irrigation methodology to one using a “drip” method.

It remains extremely urgent to undertake analysis of ways to address the underlying causes of the rising water table, in close collaboration with the Ministry of Agriculture and the Ministry of Irrigation. In the framework of the overall Conservation Plan, adequate expertise should be identified and recruited to carry out studies to elaborate a project to tackle the cause of the rising water table, and to define the appropriate mitigation measures for the archaeological remains once the water table has been lowered and stabilized.

Although the newly-established permanent committee has identified urgent, secondary and long-term solutions for the archaeological site, and the Ministry of Antiquities with the Abu Mena Monastery administration prepared a proposal project for restoration and rehabilitation, it is crucial to first complete all necessary analyses and studies, prior to engaging in any physical works.

Given the above, it is considered that the Desired state of conservation for the removal of the property from the List of World Heritage in Danger (DSOCR) has not been met and the required corrective measures have yet to be implemented. 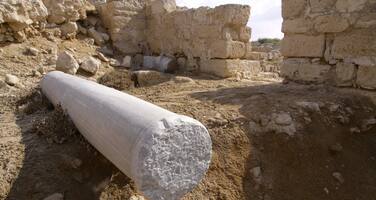