State of Conservation Historic Quarter of the ... 2015
Print

On 28 November 2014, the State Party submitted a progress report on the state of conservation on the Port Expansion Project (Terminal 2) and the Puerto Baron Mall. The project for the Terminal has been under evaluation since September 2014 by means of an Environmental Impact Assessment (EIA), as required by Law No 19.300 for General Environmental Rules. In this framework, the National Monuments Council undertook studies and issued observations on the basis of ICOMOS’ Guidelines on Heritage Impact Assessments (HIA) for World Heritage cultural properties, and the Recommendation on Historic Urban Landscape (HUL).

Regarding the Puerto Barón Mall Project, an inter-institutional group called “Conservation Committee of the Historic Quarter of the Seaport City of Valparaíso” was created by Presidential Instruction. This committee developed guidelines and intervention criteria for alternative architectural designs in order to reach the necessary balance between protecting heritage and the legitimate development requirements of the port.

On 9 February 2015, the State Party submitted a state of conservation report and on 26 March 2015 additional information submitted on the results of the revision of the project, available at https://whc.unesco.org/en/list/959/documents/. It reiterates that the country is implementing a new National Urban Development Policy -governed by the National Urban Development Council of which the National Monuments Council is a member- and that one of its key objectives is the integration of identity and heritage into territorial planning through a single tool of urban planning regulation, the Local Regulatory Plan. In the case of Valparaiso, this plan will cover the whole city and should provide a single navigation chart. Two of the six stages of the process have been concluded to date. The Master Plan for the World Heritage area will be connected to the Local Regulatory Plan, as well as with the local Development Plan. This is expected to generate a more coherent and coordinated planning and management structure.

The State Party also informs of the massive fire that ravaged the city in April 2014 –affecting the upper city outside of the World Heritage area, and on a number of specific conservation projects including nine elevators, emblematic buildings and urban spaces.

The State Party provided a systematic response to each of the Committee’s recommendations and relevant additional information on a number of specific conservation projects, including elevators, emblematic buildings and urban spaces.  It is recommended that the Committee commend the State Party on these efforts, in a situation in which it had to address the emergency situation caused by the massive fire of April 2014.

It is noted that the National Urban Development Policy has, as one of its main objectives, the integration of identity and heritage into territorial planning through Local Regulatory and Development Plans. The full connection and interaction of the Heritage Management Master Plan for the World Heritage area with these instruments should ensure due attention to the HUL aspects of the World Heritage area and its wider context.

The above instruments should also provide appropriate mechanisms for the integrated management.  In addition, the creation of the Ministry of Culture, as well as the establishment of an inter-ministerial National Programme for World Heritage Sites, would reinforce the institutional framework for cultural heritage.

However, there is some concern about the possible long timeframes that will be required to implement the policy and its planning instruments and the submission of a comprehensive report on the territorial, local and World Heritage site planning mechanisms and their integration would be welcome, along with an analysis of their effectiveness for the preservation of the Outstanding Universal Value (OUV) and its attributes and the integrated management structures that would be put in place.

The response given by the State Party on the Terminal project is noted and it is welcomed that actions are taken to apply the ICOMOS Guidelines on HIAs for World Heritage cultural properties and HUL recommendations in the impact assessment. It is recommended that the Committee request the State Party to present the finalized studies to the World Heritage Centre and the Advisory Bodies for evaluation, together with an analysis of how these studies and the project design respond to the recommendations of the 2013 Advisory mission.

As to the Puerto Baron Mall, the commitment of the State Party is demonstrated by the creation of a Conservation Committee of the Historic Quarter of the Seaport City of Valparaíso, and by the important and valuable modifications regarding the dimensional, spatial and integral conservation of the Bodega Simón Bolívar and the volumes that will allow for better visibility of the Bodega from the amphitheater. Although the developer cannot be requested to undertake an Environmental Impact Assessment, considering the great scale of the project, which will have indirect impact on the entire city of Valparaiso, and especially on the property, it would be desirable for a HIA to define any impacts on the OUV of the property, and in particular on the vitality of the sea port upon which Valparaiso’s prosperity was based and on the city’s amphitheatre-like layout.

The revised Archaeological Management Plan will ensure the adequate treatment of archaeological finds in the area of the Puerto Baron project. The historical background has been documented and will serve as a basis to interpret the context of object that might be found and also those found during the first excavations (October 2013) following which construction works were stopped until the archaeological management plan had been put in place. 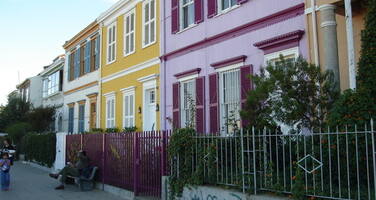