On 28 January 2015, the State Party submitted a state of conservation report. Furthermore, as recommended by the Committee, a joint ICOMOS/ICCROM Advisory mission was invited by the State Party and visited the property in January 2015. Both reports are available at https://whc.unesco.org/en/list/1194/documents, and the information can be summarized as follows:

The Advisory mission noted that the commitments made at the time of inscription for effective management to protect the OUV of the property still remain high. However the mission also noted that the pressure for land conversion remains significant, creating a considerable vulnerability that is challenging the ability of the authorities to sustain OUV. The current nesting of national, Province and Regency legislation and policy appeared to be insufficient to regulate the conversion of land within the property, as the traditional management systems – led by the pekaseh – have considerable autonomy to make land conversion and/or development decisions.

The mission also noted the growing need for strategic planning for community-centred cultural and eco-tourism, particularly for Jatiluwih and the area near Mount Batur, although the entire property is vulnerable to tourism pressure due to the lack of effective strategic planning.

At the time of inscription, due to the centrality of the communities and their traditional structures in the OUV of the property, it was envisaged that there would be full engagement of the subak farming communities with the Governing Council for the effective implementation of the management plan. However, the mission noted that the representation and engagement of the farmer community in the Governing Council, as proposed at the time of inscription, seems not to have been effectively implemented. Although the new Forum Coordination mechanism recently started by the State Party could be considered as a potential contribution to the improvement of the management system, the mission considered that it was too early to evaluate the effectiveness of this mechanism.

The mission, while welcoming the tax relief to subak farmers in Gianyar and Tabanan Regencies mentioned to the mission, considered that the establishment of financial mechanisms to support traditional subaks and reduce pressure for land conversion is a continuing priority across the whole property.

In order to strengthen the overall management processes, the mission recommended that the Governments of Indonesia and Bali Province should recognize formally the revised structure of the management system (incorporating the Forum Coordination). The mission also recommended the development of:

The mission considered that all of these (and other recommendations) were of high and urgent priority, even though many of them will be ongoing and/or long-term in duration.

Acknowledging the high vulnerability of the property to development pressures and land conversion, and the fragility of the traditional subak systems, it is recommended that the Committee urge the State Party, as a matter of urgency, to strengthen the overall management of the property through much greater engagement of, and support for, subak communities, and through more detailed strategic planning, including addressing the need to safeguard the water catchment areas and foster sustainable cultural tourism. 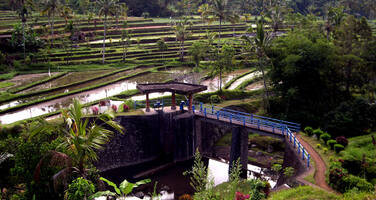