In 2014, the State Party submitted the Integrated Management Plan for Qal’at al-Bahrain (2013-2018). On 31 March 2015, the State Party submitted a report on the state of conservation of the property, which is available at https://whc.unesco.org/en/list/1192/documents/, together with a Rapid Heritage Impact Assessment (HIA) entitled “Road Connectivity Development for Nurana Island in the Kingdom of Bahrain”.

The State Party reports that, due to a restructuring of the Bahrain Government end of 2014, the review of the proposed revision of the Heritage Law, Decree 11 of 1995, to include the notions of cultural landscape, historic urban centres and other heritage categories, has so far not taken place. Subsequently, no memorandum of understanding with owners of lands located within the area designated for the extension of the World Heritage property has been signed either. For the same reason, the revision of land-use and zoning regulations which are subcategories of the Physical Planning Legislation of 1994 has not been done in late 2014, as foreseen.

The State Party reports that, following the decision to abandon the N-Road project, alternative options, other than the bridge option approved by the World Heritage Committee at its 37th session, are necessary in the short term to connect the Nurana Island to the mainland and are being explored. Studies on the speed of reclamation development along the Northern coast of the county have shown that the connection points, which are necessary to build the bridge, can only be reached around 2025. The development of Nurana Island therefore requires a temporary access solution. Two alternatives have been identified: a causeway/bridge and tunnel to cross the visual corridor towards the East (Option 1) and a causeway/bridge and on-land corridor to connect the Nurana Island to the coast, on the Western side of the property (Option 2). The Bahrain Authority for Culture and Antiquities (BACA) considered that both options could have an impact on the Outstanding Universal Value (OUV) of the property and while being elaborated as temporary solutions, could become permanent. The BACA therefore requested that a Rapid HIA be carried out by Manara Development (the developer of Nuarana Island). The purpose of the HIA is to seek an in-principle agreement from the World Heritage Centre to proceed with the proposals.

Based on the outcomes of the Rapid HIA, the BACA considers that both options are acceptable in principle but with the condition that further studies be carried out in order to ensure that there would not be any impact on the OUV of the property. However, the HIA is based on two options that are only in the preliminary design stage and that there was insufficient baseline data to fully assess potential impacts on the heritage components, particularly on the Dammam aquifer and the property’s archaeology or in terms of noise and visual intrusion.

The Rapid HIA concludes that the Dammam aquifer, the principal aquifer in Bahrain, could be damaged by both access options, which would affect the OUV of the property. It also shows that both options would have an impact on the buffer zone where unexcavated in-land and potential underwater archaeological areas could be affected. Both options would also require heavy works, which could affect the fragile setting in which these would be implemented, as well as the local communities (villages’ inhabitants, fishermen, property’s visitors, etc.). Finally, both options would have an impact on the views from the property, especially towards the sea in the case of Option 1.

The issues raised by the Rapid HIA require that further accurate studies be carried out to conclusively assess the impacts of both options to connect the Nurana Island to the mainland. These studies include soil investigations, geophysical and archaeological surveys, as well as noise and visual impact. These studies should be completed to inform the detailed design development of both options and then the HIA revised so the impacts of the proposals can be comprehensively assessed in relation to the OUV. No decision on the project should be made before this process is completed and evaluated by the World Heritage Centre and the Advisory Bodies. At this stage, on the basis of the available information, it is not possible to recommend in principle approval.

The Ministry of Culture and BACA deployed a lot of effort to elaborate and implement a detailed and comprehensive management and conservation plan of the property. However, this needs to be empowered by a long-term development plan of the area where the property is located to guarantee that the latter’s OUV would be preserved. To that end, the urban context of the property could justify using the holistic and integrated approach carried by the Recommendation on the Historic Urban Landscape. A technical meeting involving all the actual and potential future stakeholders may also be useful once the results of the complementary studies recommended by the Rapid HIA are released. 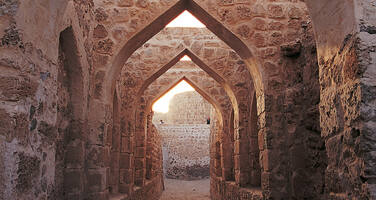