State of Conservation Kenya Lake System in the ... 2015
Print

On 29 January 2015, the State Party submitted a report on the state of conservation of the property, which is available at https://whc.unesco.org/en/list/1060/documents/.

Developments in a number of conservation issues addressed by the Committee at its previous sessions are presented in the report, as follows:

The adoption of the Kabarnet Declaration should be welcomed, and the compensation paid to the local Endorois communities by a bio-prospecting company is noted. However, the State Party’s report lacks further information regarding the implementation of the African Commission for Human and Peoples’ Rights (ACHPR) decision on the Endorois and its Resolution 197. A letter dated 19 February 2015 from Minority Rights Group International and the Endorois Welfare Council to the World Heritage Centre, while welcoming recent efforts by the State Party to engage with the Endorois, raises concern about the effectiveness in the implementation of the Endorois ruling and the level of transparency of decision-making processes, including expectations for future financial payments. Recalling Decision 38 COM 7B.91, it is recommended that the Committee strongly urge the State Party to fully implement the ACHPR Endorois decision and Resolution 197 without delay, to ensure the full and effective participation of the Endorois in the management and decision-making of Lake Bogoria.

It is also welcomed that geothermal prospecting and development within the property are not allowed, and that any prospective geothermal energy developments outside the property will be subject to an Environmental Impact Assessment (EIA). It is recommended that the Committee requests the State Party to provide more information on the current status of the EIA procedure for these developments, including copies of EIAs that have already been undertaken.

The State Party of Kenya reports that the State Party of Tanzania had confirmed its decision not to construct a soda ash factory at Lake Natron. However, on 16 March 2015, the World Heritage Centre sent a letter to the State Party of Tanzania to verify a media report, which stated that the project had received approval from Tanzania’s environmental regulatory authorities. Recalling Decision 38 COM 7B.91 and that Lake Natron is the most important breeding site for lesser flamingo in the world, the protection and conservation of which is of great importance to the integrity of the property, the State Party was requested, in the letter, to submit to the World Heritage Centre an EIA that includes a specific assessment of potential impacts on the property’s Outstanding Universal Value (OUV), and was urged not to proceed with any activities until the EIA has been received and reviewed. At the time of drafting this report, no response had been received yet.

It is noted that the one-year moratorium for development around Lake Elementaita has been postponed for an unspecified duration, considering the stated compliance of tourism investors. In the absence of clarity on the current status of these developments, it is recommended that the Committee request the State Party to provide further information on the actions undertaken to address the Committee’s request (Decision 38 COM 7B.91) for the removal of any existing illegal developments and the ecological restoration of affected areas. It is also recommended that the State Party be requested to develop and implement strict and clear regulations to prohibit developments in close proximity to fragile habitats and in the critical buffer zone to the property.

It is also noted that a more detailed State Party report, including information on the management implications of the ACHPR Endorois decision and its Resolution 197, would enable the World Heritage Centre and IUCN to analyze the state of conservation of the property more profoundly. It is finally recommended that the Committee request the States Parties of Kenya and Tanzania to invite a joint World Heritage/IUCN monitoring mission to the property to review the status of riparian areas around Lake Elementaita, to assess the water pollution and management issues that were identified as key threats in the IUCN World Heritage Outlook 2014, to evaluate concerns raised around the engagement of the Endorois community in the management of Lake Bogoria, and to review the potential impacts of the soda ash plant development at Lake Natron. 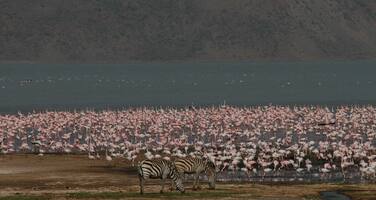